Biden mourns loss of Colin Powell: 'He will be remembered as one of our great Americans' 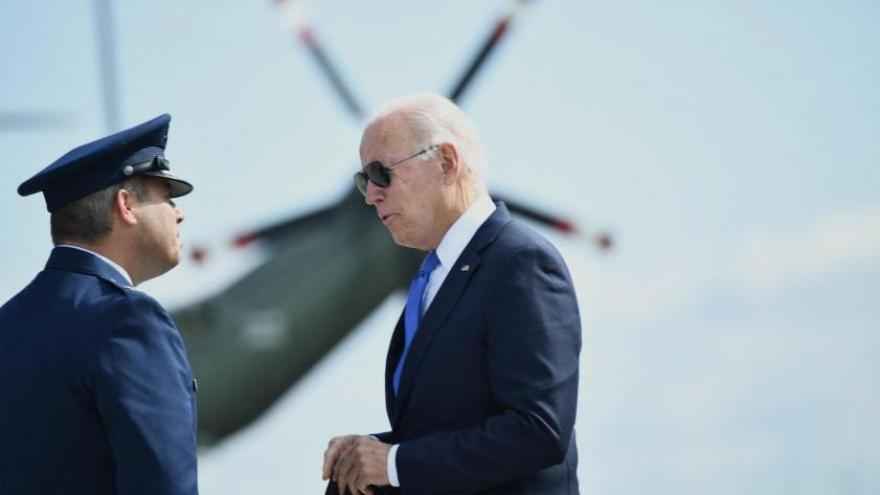 President Joe Biden on Monday mourned the loss of Colin Powell, describing him as a "dear friend" and a dedicated public servant who broke barriers as the first Black US secretary of state. Biden is shown here at Bradley International Airport in Windsor Locks, Connecticut, on October 15, 2021.

(CNN) -- President Joe Biden on Monday mourned the loss of Colin Powell, describing him as a "dear friend" and a dedicated public servant who broke barriers as the first Black US secretary of state.

"Colin Powell was a good man," Biden said in a statement. "He will be remembered as one of our great Americans."

"Colin embodied the highest ideals of both warrior and diplomat. He was committed to our nation's strength and security above all. Having fought in wars, he understood better than anyone that military might alone was not enough to maintain our peace and prosperity," Biden said.

The President continued: "From his front-seat view of history, advising presidents and shaping our nation's policies, Colin led with his personal commitment to the democratic values that make our country strong. Time and again, he put country before self, before party, before all else -- in uniform and out -- and it earned him the universal respect of the American people."

Powell's leadership in several Republican administrations helped shape American foreign policy in the last years of the 20th century and the early years of the 21st. His family announced on Facebook that he had died from complications from Covid-19 at the age of 84.

A source familiar with the matter said Powell had multiple myeloma, a cancer of plasma cells that suppresses the body's immune response. Even if fully vaccinated against Covid-19, those who are immunocompromised are at greater risk from the virus.

Biden noted that when he was a senator, he worked closely with Powell when he served in Republican administrations as national security adviser, chairman of the Joint Chiefs of Staff and as secretary of state.

"Over our many years working together -- even in disagreement -- Colin was always someone who gave you his best and treated you with respect," Biden said.

Biden noted Powell broke racial barriers, "blazing a trail for others to follow." He said Powell was committed to investing in the next generation of leadership and that his leadership "always included a focus on future."

"Above all, Colin was my friend," Biden said. "Easy to share a laugh with. A trusted confidant in good and hard times."

Biden continued: "He could drive his Corvette Stingray like nobody's business -- something I learned firsthand on the race track when I was Vice President."

Biden and Powell appeared on an episode of "Jay Leno's Garage" in 2016 and raced each other in Corvettes.

The President said he is "forever grateful" for Powell's support for his presidential candidacy "and for our shared battle for the soul of the nation."

"I will miss being able to call on his wisdom in the future," Biden said.

Powell endorsed Biden in the 2020 presidential election and recorded a video that played at the Democratic National Convention in which he attempted to appeal to more centrist voters.

The 2020 election was the fourth straight presidential election in which Powell backed the Democratic presidential nominee over the Republican. He supported Barack Obama in 2008 and 2012, and he endorsed Hillary Clinton in 2016.