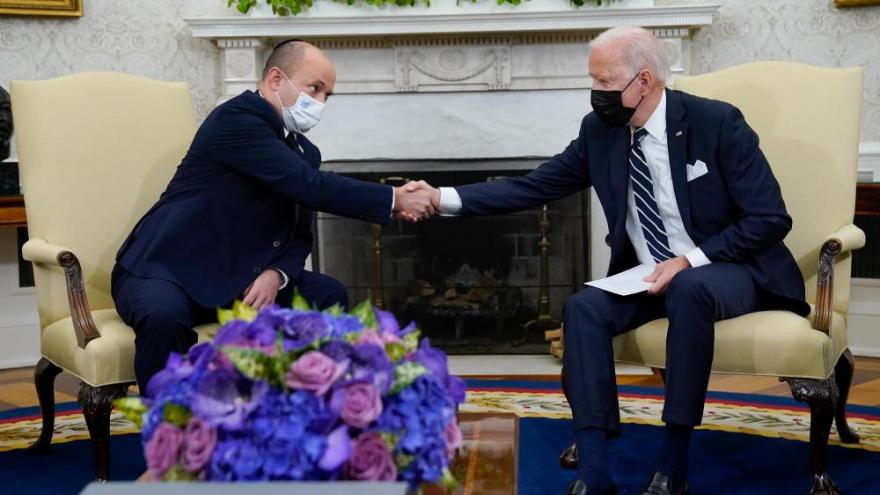 (CNN) -- When Israel's prime minister visited the White House on Friday, for the first time in 12 years it was someone other than Benjamin Netanyahu.

That alone lent the talks a sense of renewal, even though stark differences remain between President Joe Biden and his new Israeli counterpart Naftali Bennett.

"I bring with me a new spirit," Bennett said in warm remarks from the Oval Office as the meeting was getting underway, "a spirit of good will, a spirit of hope, a spirit of decency and honesty, a spirit of unity and bipartisanship, of folks who -- as you suggested -- harbor very different political opinions, even opposing, yet we all share the deep passion to work together to build a better future for Israel."

Friday's meeting had originally been scheduled for a day earlier but was postponed in the wake of a deadly terrorist attack in Kabul that killed 13 American service members. Biden cleared his schedule for meetings with top national security officials. He and Bennett spoke by phone on Thursday evening ahead of the rescheduled talks.

The delay by a day means Bennett, an Orthodox Jew, will remain in Washington until Saturday evening after the Sabbath ends, his office said.

In warm remarks, Biden hailed Bennett's coalition as the "most diverse government in Israeli history," and said the US was committed to ensuring Iran never develops a nuclear weapon.

"We're putting diplomacy first. If diplomacy fails, we're ready to turn to other options," he said, without elaborating.

He spoke in only broad terms about other issues in the region, saying he planned to discuss "ways for increased peace and prosperity for Israelis and Palestinians."

"The US will always be there for Israel. It's an unshakable partnership between our two nations," Biden said.

Biden's meeting with Bennett was arranged quickly after the Israeli leader formed a government earlier this summer, depriving Netanyahu of another term in office.

The enthusiasm in Washington for new Israeli leadership was palpable: Biden telephoned Bennett less than two hours after he was sworn in, and US officials immediately began work toward setting up a meeting.

Bennett arrived in Washington vowing to reset his country's ties to the United States. Animosity lingered from the ice-cold relationship between Netanyahu and former President Barack Obama, whose pursuit of diplomacy with Iran led to tense disagreements.

Some White House officials believed Netanyahu would resume his adversarial stance with Biden. The view was cemented when Israel began curtailing intelligence sharing this spring, according to The New York Times.

With Bennett now in power, Biden aides believe a reset is at hand. Already, CIA Director William Burns has traveled to Israel, a signal the intelligence relationship is being restored. While in Washington, Bennett was also meeting with the secretaries of state and defense.

When he met Biden, it was their first ever encounter -- one of the rare foreign leaders Biden has never met over the course of his long career in politics (he first met Netanyahu, for example, in the 1980s).

Ultimately, the difference in approach is as much -- perhaps more -- in style than substance: Bennett, the right-wing leader of a diverse coalition government, has very different views than Biden of the Israeli-Palestinian conflict and the best approach toward Iran. But he's said he'll adopt a less combative tone.

Like Netanyahu, he is opposed to restarting the Iran nuclear deal, which Biden has sought to re-enter through talks in Vienna. That diplomacy has proceeded in fits and starts, however, and US administration officials have made clear Tehran's nuclear program is advancing quickly.

"Iran's nuclear program has just dramatically broken out of the box, and it's accelerating from week to week. This is a very serious problem, and the two leaders, I think, will have the opportunity to sit together and discuss what to do about it," one US official told reporters ahead of the visit.

"We, of course, committed to a diplomatic path," the official went on. "We think that is the best way to put a ceiling on the program and roll back the gains that Iran has made over recent years on the nuclear side. But obviously, if that doesn't work, there are other avenues to pursue."

The White House hasn't elaborated on what those "other avenues" might entail.

Biden, who has said he wants to refocus American foreign policy away from decades-old conflicts toward modern-day threats like Russia and China, has not prioritized Middle East peace. He and his aides say they believe the conditions are not right for direct talks between the Israelis and Palestinians.

When a conflict erupted between Israel and militants in Gaza this spring, Biden was reluctantly brought into the decades-old issue and helped broker a ceasefire. Major breakthroughs are not expected on that front during the Friday meeting, and Bennett does not support a two-state solution resulting in an independent Palestinian state that Biden has backed for years.