Biden meets with key Democratic senators as he pushes for path on voting, infrastructure 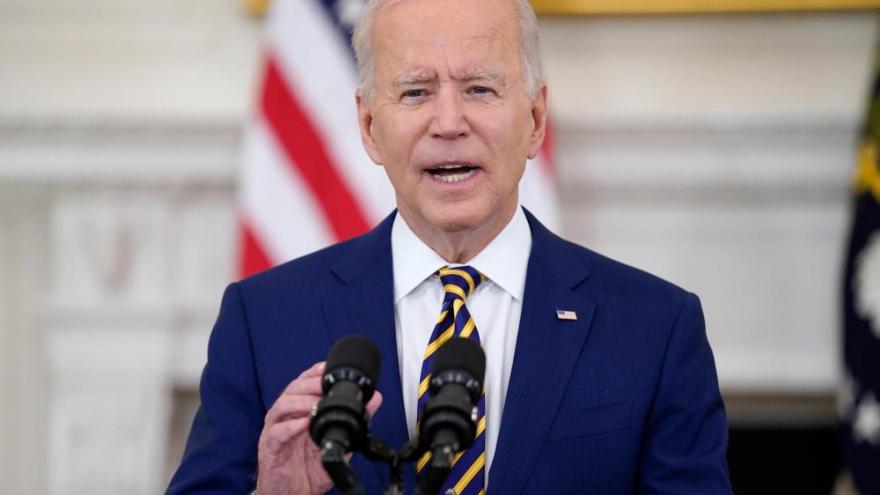 President Joe Biden ramped up his push to move his legislative agenda forward in private meetings on June 21 with two key Democratic lawmakers.

(CNN) -- President Joe Biden ramped up his push to move his legislative agenda forward in private meetings Monday with two key Democratic lawmakers and on Tuesday his infrastructure team heads to Capitol Hill for further talks.

Biden spoke with the Democrats -- Arizona Sen. Kyrsten Sinema and West Virginia Sen. Joe Manchin -- in separate meetings on Monday, according to a White House official.

The two lawmakers represent a crucial players in Biden's efforts to move his $4 trillion economic agenda. Both have insisted Democrats pursue a bipartisan track on infrastructure talks and are part of a group of 21 Republicans and Democrats currently in talks with Biden over a plan that includes $579 billion in new spending. Sinema spoke with the bipartisan group after talking with Biden.

"The President thanked each senator for their engagement toward making historic investments in economic growth, middle class jobs, and the clean energy economy, and told them he was encouraged by what has taken shape but that he still has questions about the policy as well as the means for financing the bipartisan group's proposal," the official said.

White House officials have made clear they're encouraged by the direction of the infrastructure talks thus far, but major differences remain over how to finance the proposal. Biden has rejected indexing the gas tax to inflation and applying user fees to electric vehicles -- two options considered by the group.

Biden's infrastructure negotiating team will be on the Hill on Tuesday to discuss the status of the proposal being drafted by the bipartisan group, according to a source familiar with the schedule.

Biden's senior team has been in regular touch with the group for the better part of a week, but the decision to head to Capitol Hill to be briefed in person is viewed as the next step in a process White House officials increasingly want to see reach the finish line. Still, major holdups remain, with no clear path forward to an agreement on how to finance a proposal that would include $579 billion in new spending.

Steve Ricchetti, counselor to the President and one of Biden's closest advisers, will be joined by National Economic Council Director Brian Deese and Louisa Terrell, Biden's legislative affairs chief in the Capitol on Tuesday.

The meeting between Biden's top advisers and senators is being viewed as a possible precursor to an invite to the White House, the source said, as Biden looks to expand his personal push for a deal throughout the week.

In their Monday meeting, Biden also discussed voting legislation with Manchin, just one day before the Senate is slated to hold a procedural vote on a sweeping voting rights measure, the official said. Manchin, who opposes the original measure, has floated compromise language and is in talks with Democrats on the issue.

Biden expressed his "sincere appreciation" for Manchin's efforts to this point, but also underscored his view of the urgency of the issue, the official said.

"The President conveyed that he sees voting rights as one of the most urgent issues facing our nation during his administration, and made it clear how important he thinks it is that the Senate find a path forward on this issue," the official said.

The procedural vote is expected to be blocked by Republicans, who are unified in their opposition to the bill and Manchin's compromise language.

Biden's discussions with the two moderate Democrats carry an importance beyond the ongoing bipartisan infrastructure talks. Biden has called on congressional Democrats to start work on a parallel process that would allow for many of his priorities to pass without Republican votes.

In order for that effort to have a pathway forward in a Senate where Democrats have the barest of majorities, Manchin and Sinema would have to be on board.

The two senators have been vocal in recent weeks about their support for keeping Senate filibuster rules in place, with Sinema saying Monday in a Washington Post op-ed that although she thinks the chamber should debate the rules, her "support for retaining the 60-vote threshold is not based on the importance of any particular policy. It is based on what is best for our democracy."

Manchin, meanwhile, wrote in an op-ed published in the Charleston Gazette earlier this month that he "will not vote to weaken or eliminate the filibuster," arguing that some Democrats have "attempted to demonize the filibuster and conveniently ignore how it has been critical to protecting the rights of Democrats in the past."

The White House official said Biden "also made clear that he is at the same time focused on budget resolution discussions in the Senate."

The outsized role Manchin and Sinema play in the prospects for Biden's agenda has been clear for months, but Biden has increasingly focused his attention on the pair in recent weeks as the administration works to find a path forward for his sweeping agenda.

When separate talks between Biden and a group of Senate Republicans fell apart earlier this month, two of the first calls Biden made were to Manchin and Sinema.

This story has been updated with further developments and background.