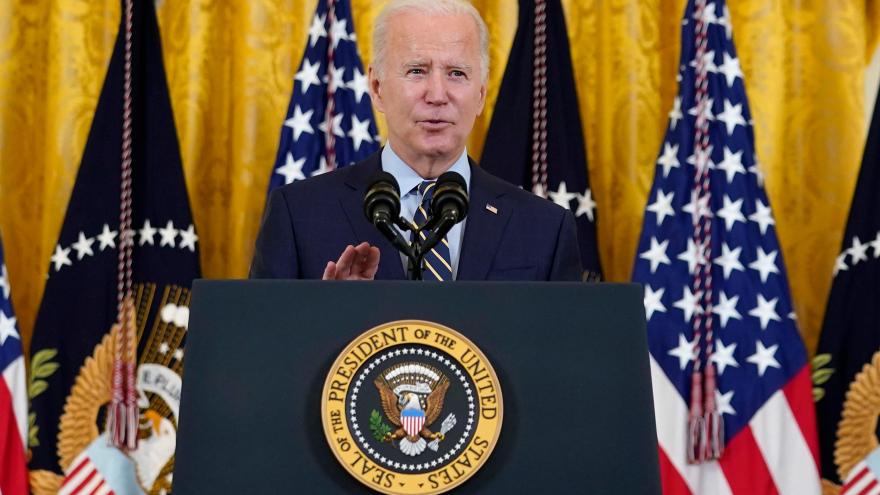 "Twenty precious first graders, six heroic educators, a lone gunman. In an unconscionable act of violence, everything changed that morning for you, and the nation was shocked," Biden said in a video released Tuesday.

The President said it was "one of the saddest days" of the Obama administration.

"We came close to legislation, but we came up short," Biden said of the push to enact stricter gun laws in the immediate aftermath of the shooting in Newtown, Connecticut.

He continued: "It was so darn frustrating, and it's still frustrating now for you and me and so many others in Parkland, Florida; and Oxford, Michigan; and communities across the country -- these horrific shootings make national headlines and embarrass us as a nation."

The President called on the Senate to pass three bills -- one on background checks, one aimed at keeping guns out of the hands of abusers and the Build Back Better Act, which includes programs for community violence intervention.

"We owe all of these families more than our prayers. We owe them action," Biden said of those affected by gun violence.

Earlier this year, Biden unveiled a set of executive actions aimed at taking certain guns out of the hands of criminals and pouring resources into community violence prevention.

But the limited scope of the President's actions underscores the challenge he faces in getting legislation passed on guns in an evenly split and starkly divided United States Senate.

"Certainly, none of the executive actions alone are enough to fully solve this problem, which is why the President is calling on Congress to act," a senior White House official told reporters Tuesday.

Bipartisan talks on gun reform in the Senate floundered earlier this year. In the aftermath of the Michigan school shooting earlier this month, Democratic Sen. Chris Murphy of Connecticut, who represented the Sandy Hook families and has made gun safety a centerpiece of his time in the Senate, told CNN that he was hopeful that negotiations could resume in the coming weeks to produce some bipartisan reform.

Going forward, the White House plans to identify new ways to use existing authorities, the senior official said, and Biden can be expected to continue to call on Congress pass legislation.

The administration has also been hampered by the lack of a permanent director of the Bureau of Alcohol, Tobacco, Firearms and Explosives. Without 60 votes for confirmation in the Senate, the White House withdrew the nomination of David Chipman in September, placing blame on Republicans for the inability to get Chipman confirmed despite concerns among some moderate Democrats over his past record on gun control.

"We are working to identify another highly qualified nominee to be director of ATF," the senior official said, calling Chipman an "incredible" candidate.

The official added: "We definitely know and need a new ATF director to continue the work on gun violence prevention. But we have shown that even without an ATF director, we will do everything we can to reduce gun violence."