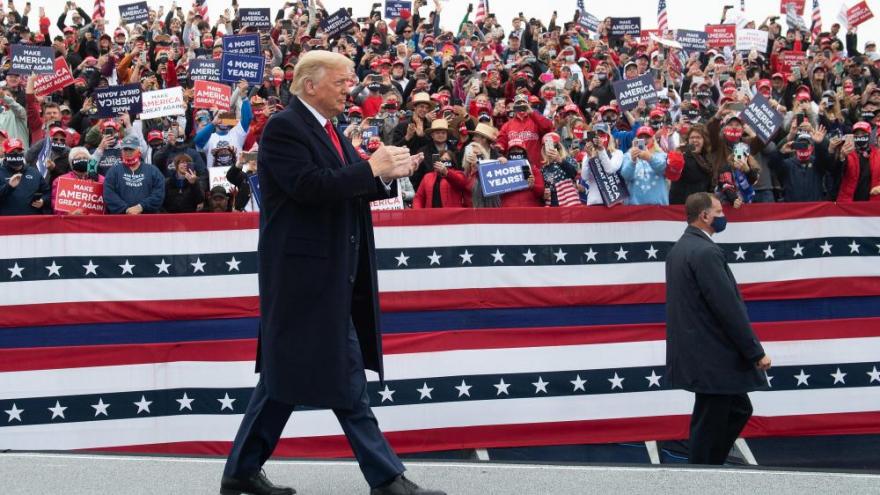 Biden makes play for red states in final days of campaign as Trump narrows his focus.

(CNN) -- Democratic presidential nominee Joe Biden's campaign is making a late push into deeper-red states in the final week before the 2020 election, chasing a number of possible paths to 270 electoral votes while President Donald Trump focuses on defending a narrower set of states that he won four years ago but where polls show he now trails.

Biden is set to visit Georgia and Iowa this week, while his running mate, California Sen. Kamala Harris, travels Friday to Texas -- all states Trump won handily in 2016.

Trump's campaign, meanwhile, is narrowing its focus. It is largely ignoring the Biden team's bids for states like Georgia, Texas and Ohio, where Biden has made a late advertising push -- a result of the reality that Trump cannot keep pace with the better-funded Biden's spending.

Build your own road to 270 electoral votes with CNN's interactive map.

With so many states to defend, Trump's campaign is banking on those states' electorates being Republican enough that he can win them with limited effort. Instead, Trump is focusing his efforts on seven states he won four years ago, as well as Minnesota and Nevada, which he hopes to flip this time around.

The travel schedules and ad spending in the race's final week underscores the reality that Biden's campaign is competing on a much larger playing field than Trump -- one that includes states where a strong Biden performance could also help deliver Democratic victories in key House and Senate races.

There are six states that Democratic and Republican operatives believe are most likely to push the winner past 270 electoral votes: Arizona, Florida, Michigan, North Carolina, Pennsylvania and Wisconsin. Trump won all six in 2016, but recent non-partisan public polls show Biden either leading or within the margin of error in all of them.

In the final days, Biden's campaign hasn't lost sight of its most important targets: the three "blue wall" states Trump toppled in 2016 -- Michigan, Pennsylvania and Wisconsin. Hillary Clinton was criticized in 2016 for failing to focus enough on Wisconsin and Michigan, in particular, in the race's closing weeks. Biden plans to travel to Wisconsin on Friday and Michigan on Saturday. Biden on Monday greeted supporters in Chester, Pennsylvania.

"The blue wall has to be re-established," Biden told reporters Monday in Pennsylvania.

A Biden aide said Monday that the campaign travel is focused primarily on keeping open as many possible paths to 270 electoral votes as possible.

Biden is set to travel Tuesday to Warm Springs, Georgia -- the home of what was once known as Franklin D. Roosevelt's "Little White House" -- to deliver what a campaign aide said would be a closing argument that draws parallels between the Great Depression that Roosevelt faced and today's dire economic straits.

Georgia voters are deciding two Senate races this year, which are both potentially crucial in the battle for party control of the chamber.

On Friday, Biden and Harris are visiting two more states that in 2016 weren't as seriously contested: Biden will travel to Iowa, where Democrat Theresa Greenfield has mounted a stiff challenge against Republican Sen. Joni Ernst, while Harris makes a trip to Texas -- a state with several competitive congressional races, and where Democrats' bid to win a majority in the state House could lay the groundwork for flipping more congressional seats after next year's redistricting process.

The trips aren't the sort of all-in effort that some Democrats in Texas and Georgia have hoped for -- in Texas, in particular, that would have to involve Biden himself traveling to the state and millions more dollars on ads -- but show that Biden's campaign sees opportunities in the traditionally Republican states.

The former vice president is the only one with television ad reservations in Texas in the race's closing weeks. Trump's campaign is entirely off the airwaves there, despite polls in recent days showing both candidates with small single-digit leads within their margins of error, and Democratic outside groups are outspending GOP groups.

Biden told reporters Monday that his decision to travel to Iowa does not mean he's "overconfident" about his ability to win other states but rather that he's trying to "make sure we win every vote possible."

The Biden campaign's ability to compete across a broader map than Trump comes in part because of a financial advantage of more than $100 million: On October 14, Biden and the Democratic Party had $331 million in the bank compared to Trump and the GOP's $223 million.

Biden and outside Democratic groups are poised to have nearly a 2-to-1 advantage over Trump and outside Republican groups in television ad spending over the race's final week, according to data from the ad-tracking firm Kantar Media/CMAG.

Biden is also reaching voters across the map through $5.7 million in national television ads, while Trump hasn't reserved any such ads.

Trump defends states he won in 2016

This week, Trump will hold rallies in Michigan on Tuesday, Wisconsin on Wednesday and Arizona on Thursday -- where he'll visit both Phoenix and Bullhead City, a town on the border of Nevada.

He'll also stop Tuesday in Omaha, Nebraska -- in a congressional district that, due to Nebraska's unique system of apportioning its electoral votes, has one electoral vote at stake on its own, and is also next door to Iowa, another competitive state.

Vice President Mike Pence visited Minnesota on Monday. On Tuesday, he'll travel to North Carolina and South Carolina, where Democratic Senate hopeful Jaime Harrison's record-setting fundraising has turned his race against Republican Sen. Lindsey Graham into a surprisingly competitive one. Wednesday, Pence is due to visit Wisconsin and Michigan; on Thursday, he'll travel to Iowa and Nevada.

Florida and North Carolina have been the closest of the six key states, and where the Trump campaign has spent significant time and resources in the past weeks.

And Trump spent Monday holding three rallies in Pennsylvania, where he hammered Biden for his comment in their final debate that he would seek to end the oil industry. That comment could prove politically damaging in portions of western Pennsylvania, where fracking for natural gas is a major economic driver. But the attacks could also backfire for Trump elsewhere among voters concerned about climate change.

Trump's campaign announced that it has added $6 million to its $55 million advertising push over the race's final two weeks -- and said the money is mostly focused on Michigan, Pennsylvania and Wisconsin. Trump senior adviser Jason Miller said the campaign is also expanding radio ads targeting Black and Latino voters, particularly in the Milwaukee area.

Trump campaign manager Bill Stepien on Monday also told reporters the campaign had moved senior Ohio adviser Bob Paduchik to neighboring Pennsylvania for the final week of the race, another signal of the campaign's narrowing priorities.

"We think the calendar reflects what we believe our potential pathways to 270 are, preserving optionality, making sure we harden our support, we turn out our vote, and convince last minute persuadables," Stepien said Monday.