Biden makes a passionate plea: 'Beating cancer is something we can do together' 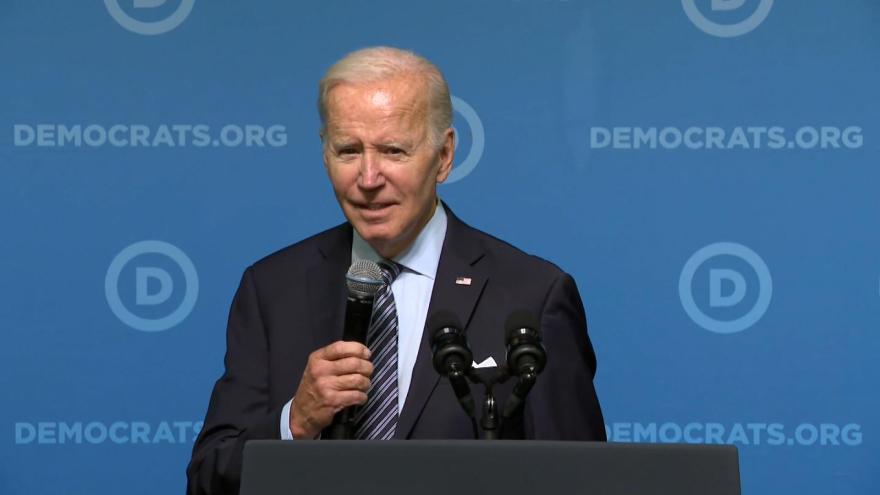 President Joe Biden is ramping up his travel schedule the week of September 12 with the midterm elections fast approaching.

(CNN) -- President Joe Biden sought to deliver a unifying speech in Boston on Monday focused on his "Moonshot" initiative to reduce cancer deaths in the United States -- a stop that's part of a ramped up travel schedule highlighting his administration's accomplishments ahead of the midterm elections.

Biden told an audience at Boston's John F. Kennedy Library and Museum that his goal is to cut cancer death rates by at least 50% in the next 25 years. The President also said he wants to "create a more supportive experience for patients and families."

The President -- who lost his son to brain cancer -- spoke in personal, passionate terms about his goal, which he called "bold, ambitious" and "completely doable."

"Cancer does not discriminate red and blue. It doesn't care if you're Republican or Democrat. Beating cancer is something we can do together," the President said discussing the administration's efforts to cut the number of deaths from cancer in the United States in half over the next 25 years.

Biden's speech came on the 60th anniversary of Kennedy's original "Moonshot" speech, in which he unveiled his goal of landing a man on the Moon.

"When he set that goal, he established a national purpose that could rally the American people in a common cause and he succeeded," Biden said of Kennedy. "Now, in our time, on the 60th anniversary of his clarion call, we face another inflection point. And together, we can choose to move forward with unity, hope and optimism. And I believe we can usher in the same unwillingness to postpone -- the same national purpose that will serve to organize and measure the best of our energies and skills to end cancer as we know it and even cure cancers once and for all."

To "break the logjams" in Congress, Biden said he would use his authorities as President to increase funding for cancer research.

The President also announced that Dr. Renee Wegrzyn will become the inaugural director of the Advanced Research Projects Agency for Health, which is a new agency that aims to "drive biomedical innovation that supports the health of all Americans." He is also expected to sign an executive order that will launch a National Biotechnology and Biomanufacturing Initiative, the White House said.

The midterm elections are less than 60 days away, and Biden's travel to Boston is his latest effort aimed at capitalizing on the political momentum spurred by recent legislative achievements and dropping gas prices.

Earlier Monday, the President highlighted projects made possible by the bipartisan infrastructure law at Boston Logan International Airport's Terminal E. New spending from the infrastructure law, he said, will create more than 5,000 jobs and expand capacity and increase accessibility at the airport.

Biden, at the airport, stressed the importance of competing with other countries like China in addition to rebuilding the nation's infrastructure.

"We risk losing our edge as nation to China, and the rest of the world is catching up. That stops now, with investments like we're celebrating here today," the President said.

Biden said: "Folks, America invented modern aviation. But we've allowed our airports to lag behind our competitors. Today, not a single solitary American airport, not one, ranked in the top 25 in the world. The United States of America. Not one airport ranks in the top 25 in the world. What in the hell's the matter with us? It means commerce, it means income, it means security."

The investments in the airport include $50 million to modernize Terminal E and $12 million to improve roadways. The President said in addition to being frustrating and inconvenient for passengers, traffic jams and delays on airport runways cause air pollution that harms the environment and directly affects neighboring communities.

Biden told reporters Monday ahead of his trip to Boston: "We're finally going to make infrastructure begin to work. We're making a major investment as you know, up in a great city with an airport that is really behind the times, as most are. And we're going to be spending a lot of money and we're going to get it done quickly, and we're going to go all through America making our airports the best in the world."

'People are beginning to focus on what's going on'

On Monday evening, the President also participated in a reception for the Democratic National Committee hosted at the home of Jonathan Lavine, the co-managing partner of Bain Capital.

In remarks at the event, according to reporters in the room, the President ticked off what he sees as his administrative accomplishments -- including major legislative wins, lower gas prices and a reduction in inflation. He also sought to highlight how the nation is at an "inflection point" in history.

"The fact is that extreme Republicans are going to take us backward," Biden said, adding that "there's a lot at stake and we have to choose a different path."

Biden warned the group, "If we lose the House and lose the Senate, it's going to be a really difficult two years. I'll be spending more time with the veto pen."

The President pointed to a poll showing that his approval rating had improved, but added, "I don't know how that holds."

The event hosted approximately 40 attendees and was expected to raise $2 million for the DNC and the Democratic Grassroots Victory Fund, according to a DNC official.

Biden's schedule for the rest of the week, as outlined by the White House, includes a celebration at the White House for the passage of the Inflation Reduction Act -- a $750 billion health care, tax and climate bill -- as well as a trip to the key battleground state of Michigan.