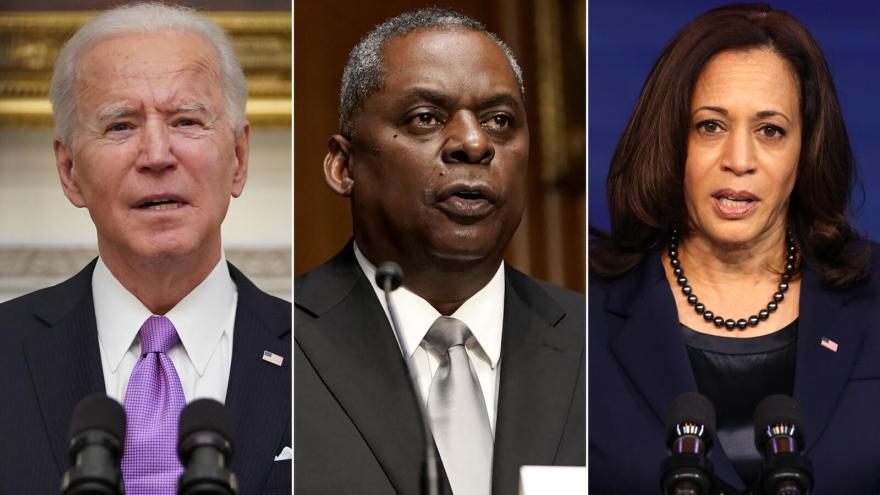 President Joe Biden is set to meet Monday morning with Defense Secretary Lloyd Austin, as the President is poised to repeal a Trump-era ban on most transgender Americans joining the military as early as Monday.

"This is reinstating a position that the previous commanders and, as well as the secretaries, have supported. And what I'm doing is enabling all qualified Americans to serve their country in uniform," Biden said, speaking from the Oval Office just before signing the executive order.

President Donald Trump's ban has been rebuked by the Democrat-led House of Representatives and condemned by LGBTQ activists as discriminatory. Austin voiced his support for overturning the ban in his Senate confirmation hearing last week.

White House press secretary Jen Psaki said Monday that cases in which transgender service members were discharged from the military because of their gender identity would be reexamined.

"President Biden believes gender identity should not be a bar to military service and that America's strength is found in its diversity," Psaki said. "America is stronger around the world when it is inclusive."

Biden had a meeting late Monday morning with Austin, Vice President Kamala Harris and the Chairman of the Joint Chiefs of Staff Mark Milley, according to the White House. Later on Monday, Harris is scheduled to ceremonially swear in Austin as Defense secretary in the Roosevelt Room at the White House.

Austin addressed the ban in his confirmation hearing on Friday and told the Senate Armed Services Committee: "I truly believe, senator, that as I said in my opening statement, that if you're fit and you're qualified to serve and you can maintain the standards, you should be allowed to serve."

He was confirmed by the Senate later that day, after being granted a congressional waiver to serve in his post because he was assuming the post before waiting seven years after active-duty service. Austin was the second member of Biden's Cabinet to be confirmed by the Senate, following Director of National Intelligence Avril Haines.

Trump first announced the ban on Twitter in July 2017, arguing transgender people in the military would lead to "tremendous medical costs and disruption."

The policy, later officially released by then-Secretary of Defense James Mattis in 2018, blocks individuals who have been diagnosed with a condition known as gender dysphoria from serving with limited exceptions. The policy specifies individuals without the condition can serve, but only if they do so according to the sex they were assigned at birth.

Trump's ban reversed a policy initially approved by the Defense Department under former President Barack Obama, which was still under final review, that would have allowed transgender individuals to openly serve in the military.

The Supreme Court allowed Trump's transgender military ban to go into effect in January 2019. The House of Representatives passed a resolution in March of that year expressing opposition to Trump's ban, describing it as discriminatory and saying it was based on "flawed scientific and medical claims."

"The greatest military in the world will again value readiness over bias, and qualifications over discrimination," he said in a statement.