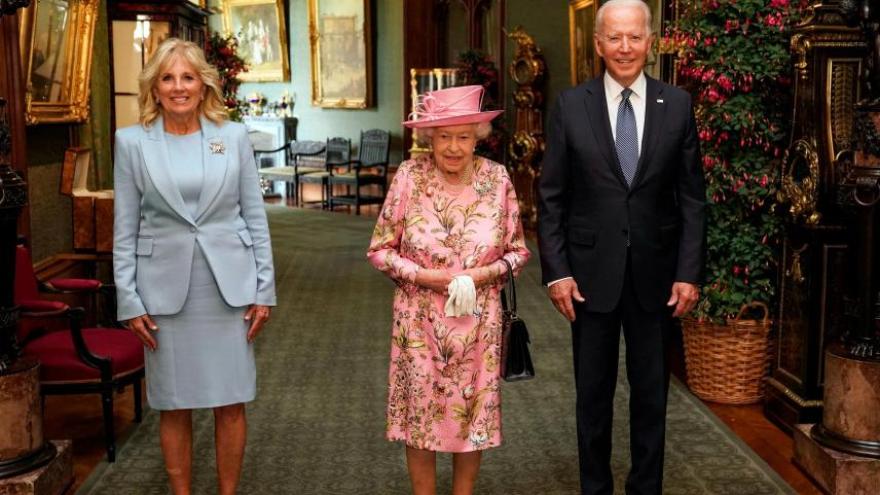 US President Joe Biden (right) and first lady Jill Biden (left) on September 8 mourned the death of Queen Elizabeth II who "defined an era." The Bidens and Queen Elizabeth II (center) are seen here in Windsor, England, in June of 2021.

(CNN) -- US President Joe Biden and leaders around the world mourned Queen Elizabeth II, following her death earlier Thursday at the age of 96.

The President and first lady Jill Biden expressed their condolences at the British Embassy in Washington, where they made an impromptu stop to sign a condolence book.

"We mourn for all of you. She was a great lady. We're so delighted we got to meet her," the President told embassy staff.

The first lady also presented a bouquet of flowers to British Ambassador to the US Karen Pierce, who greeted them at the embassy.

The President and the first lady said earlier in a joint statement that the Queen -- the longest-reigning British monarch whose rule spanned seven decades -- "defined an era."

"Today, the thoughts and prayers of people all across the United States are with the people of the United Kingdom and the Commonwealth in their grief," the White House statement said. "We send our deepest condolences to the Royal Family, who are not only mourning their Queen, but their dear mother, grandmother, and great-grandmother. Her legacy will loom large in the pages of British history, and in the story of our world."

American flags at the White House, other federal buildings, military facilities and embassies overseas will be flown at half-staff "until the day of internment," according to a proclamation by President Biden on the Queen's death.

The first couple, in their statement, called the Queen "a steadying presence and a source of comfort and pride for generations of Britons, including many who have never known their country without her."

"Supported by her beloved Prince Philip for 73 years, Queen Elizabeth II led always with grace, an unwavering commitment to duty, and the incomparable power of her example. She endured the dangers and deprivations of a world war alongside the British people and rallied them during the devastation of a global pandemic to look to better days ahead," the White House statement continued.

The Queen, the Bidens added, "was a stateswoman of unmatched dignity and constancy who deepened the bedrock Alliance between the United Kingdom and the United States."

"She helped make our relationship special," the statement said, referring to the UK's "special relationship" with the United States -- a term coined by Winston Churchill. The Bidens also said they look forward to continuing "a close friendship" with King Charles III and the Queen Consort.

Recalling their time spent together, the Bidens wrote that they first met Queen Elizabeth in 1982 as part of a Senate delegation traveling to the UK.

Biden and the Queen last spoke and saw one another during the President's visit to the UK in June 2021, White House press secretary Karine Jean-Pierre said earlier Thursday.

Condolences from leaders across the UK, the Commonwealth and around the world have poured in following the news of the Queen's death.

Scottish First Minister Nicola Sturgeon said the Queen was "loved and admired" by the people of Scotland.

"And by all accounts, Her Majesty was rarely happier than when she was here in Scotland at her beloved Balmoral," Sturgeon continued, referring to the castle where the Queen died.

Canadian Prime Minister Justin Trudeau said the Queen was "a constant presence in our lives -- and her service to Canadians will forever remain an important part of our country's history."

"As we look back at her life and her reign that spanned so many decades, Canadians will always remember and cherish Her Majesty's wisdom, compassion, and warmth," he continued.

Australian Prime Minister Anthony Albanese wrote in a statement that the monarch had lived a "long life devoted to duty, family, faith and service," noting that "it was clear Her Majesty held a special place in her heart for Australia." As head of state, the Queen visited Australia 16 times.

New Zealand Prime Minister Jacinda Ardern remembered the Queen in a national address after her passing, saying that she had come to define "notions of service, charity, and consistency."

Ardern also announced that New Zealand would be moving into a period of official mourning. Flags will be flown at half-staff. Preparations for a state memorial are under way, and will be held after the Queen's official funeral in the UK.

Leaders in Asia woke on Friday to the news of her passing.

Indian Prime Minister Narendra Modi said in a statement that he had "memorable meetings" with the Queen, writing, "During one of the meetings she showed me the handkerchief Mahatma Gandhi gifted her on her wedding. I will always cherish that gesture."

Prime Minister Lee Hsien Loong of Singapore, a Southeast Asian former British colony, said he was "deeply saddened" by her passing. In public statements shared on his official social media accounts, Lee said: "Her Majesty left a significant mark on Singapore's history and our longstanding close relations with the United Kingdom. Her passing is greatly mourned by everyone in Singapore."

South Korean President Yoon Suk Yeol on Friday shared his condolences. "Her kind heart and good deeds will remain in our memories," he tweeted. "She had a strong belief in the cause of human freedom and left great legacies of dignity."

Japanese Prime Minister Fumio Kishida said the Queen had helped strengthen ties between Britain and Japan, which is home to the world's oldest continuous monarchy. "The passing of Her Majesty Queen Elizabeth II, who has led Britain through a tumultuous global period, is not just a major loss for the citizens of the UK but for the international community," Kishida told reporters on Friday.

In Taiwan, President Tsai Ing-wen praised the Queen as a "backbone of global democracy" and extended her "deepest condolences to the British government and the Royal Family."

Taoiseach of Ireland Micheál Martin called her passing "the end of an era," saying her "dedication to duty and public service were self-evident and her wisdom and experience truly unique."

Pope Francis praised the Queen as a "steadfast witness of faith in Jesus Christ" in an open letter to the new King.

"Commending her noble soul to the merciful goodness of our Heavenly Father, I assure Your Majesty of my prayers that Almighty God will sustain you with his unfailing grace as you now take up your high responsibilities as King," the Pope wrote.

French President Emmanuel Macron wrote that the Queen "embodied the British nation's continuity and unity for over 70 years. I remember her as a friend of France, a kind-hearted queen who has left a lasting impression on her country and her century."

Ukrainian President Volodymyr Zelensky tweeted, "It is with deep sadness that we learned of the death of Her Majesty Queen Elizabeth II. On behalf of the people, we extend sincere condolences to the @RoyalFamily, the entire United Kingdom and the Commonwealth over this irreparable loss. Our thoughts and prayers are with you."

German Chancellor Olaf Scholz said the Queen "was a role model and inspiration for millions, also here in Germany. Her commitment to German-British reconciliation after the horrors of World War II will remain unforgotten. She will be missed, not least her wonderful humour."

Russian President Vladimir Putin said in a release, "The most important events in the recent history of the United Kingdom are inextricably linked with the name of Her Majesty."

"For many decades, Elizabeth II rightfully enjoyed the love and respect of her subjects, as well as authority on the world stage," Putin continued. "I wish you courage and perseverance in the face of this heavy, irreparable loss."

Statements of condolence have come in from dozens of other nations, ranging from Panama to Pakistan.

George W. Bush, who welcomed the Queen to the US during his time in office, recalled spending time in Buckingham Palace and meeting her famed corgis.

"Spending time at Buckingham Palace, and having tea with Her Majesty -- and her corgis -- is among our fondest memories of the presidency," Bush wrote. "Queen Elizabeth ably led England through dark moments with her confidence in her people and her vision for a brighter tomorrow. Our world benefited from her steady resolve, and we are grateful for her decades of service as sovereign."

Donald and Melania Trump wrote in a statement that "her leadership and enduring diplomacy secured and advanced alliances with the United States and countries around the world. However, she will always be remembered for her faithfulness to her country and her unwavering devotion to her fellow countrymen and women."

"(We) will always cherish our time together with the Queen, and never forget Her Majesty's generous friendship, great wisdom, and wonderful sense of humor. What a grand and beautiful lady she was -- there was nobody like her!" Trump wrote.

The Obamas remembered the Queen as a leader who made the role "her own."

"Her Majesty was just 25 years old when she took on the enormous task of helming one of the world's great democracies. In the decades that followed, she would go on to make the role of Queen her own -- with a reign defined by grace, elegance, and a tireless work ethic, defying the odds and expectations placed on women of her generation," they wrote.

And Bill and Hillary Clinton marked the passing by remembering her as a someone with "unfailing grace, dignity, and genuine care for the welfare of all its people."