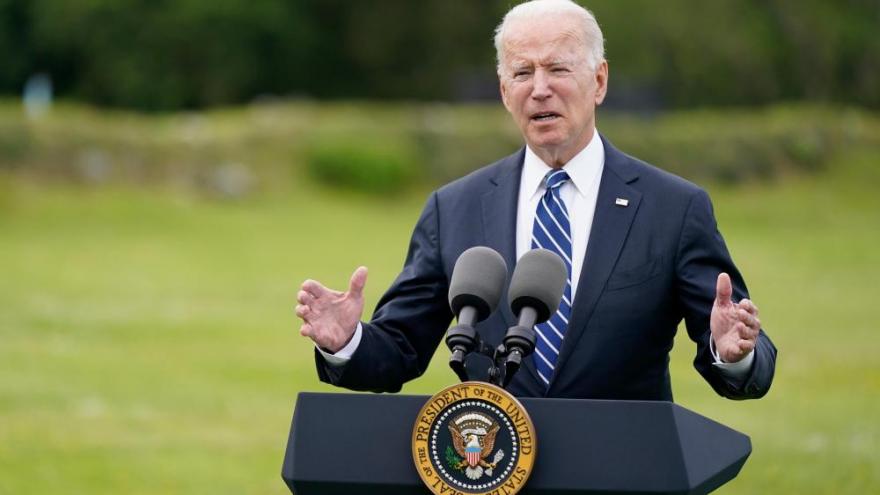 President Joe Biden speaks about his administration's global Covid-19 vaccination efforts ahead of the G-7 summit on June 10 in St. Ives, England.

(CNN) -- The leaders of the world's advanced economies gathered Friday on the Cornish coast for the first time since the global coronavirus pandemic began, welcoming President Joe Biden as a new member who arrived here intent on restoring traditional American alliances.

With a pandemic raging in much of the world, a global economy still in shock and threats rising from Russia and China, the Group of 7 summit that formally began on Friday was shaping up to potentially be one of the most consequential in recent memory. The gathered nations will pledge to donate 1 billion Covid vaccine doses, with the US providing about half of those shots.

Biden has ramped up those stakes, framing the moment as one just as momentous as the years during and after World War II, when the US, the United Kingdom and their allies worked together to help the world recover. An army mechanic from that war -- Queen Elizabeth II -- will join leaders Friday night for a reception.

His day began with the landmark "family photo," a symbolic moment for a President who has long sought a place in the club of world leaders. The group smiled for the picture with scenic Carbis Bay in the background.

Biden was seen in friendly conversation with President Emmanuel Macron of France and Prime Minister Justin Trudeau of Canada as he walked to the platform. As the leaders were returning inside after the photo was taken, Biden walked arm-in-arm with Macron, whom he had not yet met as president.

Already, Biden has used his first trip abroad as President to announce a purchase of new vaccines for the developing world, likening it to American wartime efforts building tanks and airplanes. And he sat down for his first face-to-face meeting with Britain's Prime Minister in a photo op designed to replicate a historic World War II alliance.

He's sought to convey a message of unity after four years of fractured alliances under then-President Donald Trump.

German Chancellor Angela Merkel said Friday that she is "very happy" to have Biden at the summit, saying that the G7 Summit will send a "strong" message in support of multilateralism.

"I am, of course, happy that the American President is present here. Being able to meet Joe Biden is obviously important because he stands for the commitment to multilateralism which we were missing in recent years," Merkel said.

"We will find strong words here in support of multilateralism and also for values based multilateralism which will lead to a dispute with Russia and in some aspects also with China," she added.

While European leaders like Merkel are sighing with relief at a more traditional US presidency, there remain differences between the leaders.

Skepticism also abounds over the durability of Biden's message promoting democracy over autocracy. Biden has sought to use his new commitment on vaccines as a sign that democracies can deliver results for the world. But developments back home -- including revelations about the Justice Department's pursuit of Democrats' data and an impasse in Congress on Biden's agenda -- have undercut his pitch.

On Friday, Biden turns to the full G7 group, which comprises the leaders of Britain, Canada, France, Germany, Japan, Italy and the United States. Biden's wife, first lady Jill Biden, said Thursday that her husband had been training for the moment.

"He's been studying for weeks working up for today," she said. "He knows most of the leaders that will be here. Joe loves foreign policy. This is his forte."

Later he'll meet for closed-door sessions on the global pandemic recovery, the driving topic for leaders urgently working to pull their nations from the grips of the worst global health crisis in a generation.

The global economy is up first on the agenda, with the global tax rate and aid for countries in need on the docket. These efforts, the White House said, will "forge a more fair and inclusive global economy" as the world leaders gather in Cornwall.

Biden and the G7 leaders, the White House said, will "discuss ways to forge a more fair, sustainable, and inclusive global economy that meets the unique challenges of our time. President Biden and G7 partners are committed to a global recovery that benefits the middle class and working families at home and around the world."

The group is expected to announce an endorsement for the global minimum tax of at least 15%, a Biden-led overhaul of the global tax system, after Treasury Secretary Janet Yellen and her finance minister counterparts announced an agreement on the matter earlier this month in London.

On Thursday, Biden framed his announcement that the US was purchasing 500 million Pfizer vaccine doses as a commitment akin to America's participation in World War II, saying the United States' values required it to help inoculate the world.

"In times of trouble, Americans reach out to lend a helping hand. That's who we are," Biden said, describing his vaccine announcement as "historic" and citing the tragedies of the pandemic in the US along with the government's "Herculean effort" to recover.

"America will be the arsenal of vaccines in our fight against Covid-19, just as America was the arsenal of democracy during World War II," he said, harkening later to tanks and planes built near the Pfizer plant in Michigan during the war. "Now a new generation of American men and women ... are committing today's latest technology to build a new arsenal."

According to a White House fact sheet, the other nations in the G7 will agree to donate an additional 500 million doses, bringing the total doses pledged by the world's richest nations to be 1 billion.

"This commitment forms the basis of a comprehensive set of G7+ actions towards ending this global pandemic in 2022," the fact sheet states. "The G7+ action plan that will be agreed to by leaders in Cornwall includes vaccinating the world's most vulnerable, providing emergency supplies, bolstering world-wide economic recovery, and positioning the international community to prepare for, prevent, detect, and respond to future biological catastrophes."

The United Kingdom is an old ally, including during the war, and Biden has sought to underscore those historic ties during his time here.

He and Prime Minister Boris Johnson have sought to replicate the historic alliance between President Franklin Delano Roosevelt and Prime Minister Winston Churchill by signing a new version of the Atlantic Charter, a document signed after the war in an attempt to shape the new world order.

The new document did not mention Russia or China by name but did mention persistent issues emanating from those countries, including disinformation campaigns and election meddling.

"It's been 80 years since the last one, it's about time that it gets refreshed," a senior administration official said ahead of the signing, which came during Biden's one-on-one talks with Johnson in Cornwall. "The original really outlined what the postwar world order could and should look like; this new charter will make clear what the coming decades of the 21st century can and should look like."