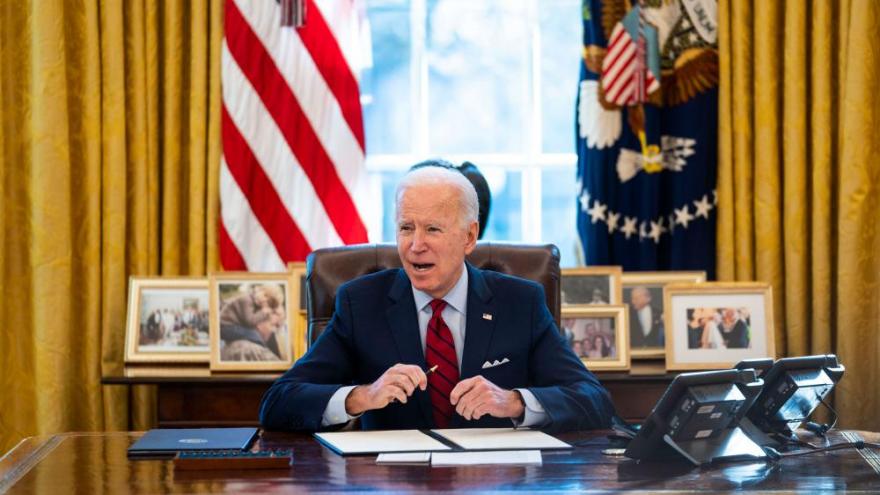 The Biden administration plans to announce on Thursday that it will increase the number of refugees who can come to the United States. President Joe Biden is seen in the Oval Office of the White House on January 28, 2021 in Washington, DC.

(CNN) -- The Biden administration plans to announce on Thursday that it will increase the number of refugees who can come to the United States, a move toward building up refugee admissions after years of historic low arrivals under former President Donald Trump, according to two sources familiar with the plans.

President Joe Biden, who pledged to raise the cap during the campaign, is expected to announce his intention to increase the number of refugees allowed into the US during a visit to the State Department, according to one source. The Trump administration set a refugee cap of 15,000 for this fiscal year, the lowest since 1980. It's unclear by how much the Biden administration will increase that cap.

The refugee cap must be approved by the president. Biden has pledged to set an annual admissions cap of 125,000, though the plan is to wait until October, when the next fiscal year begins, to set that cap, according to one of the sources.

The refugee cap increase builds on a series of executive actions from Biden aimed at setting a new course for US immigration policy following the Trump administration's hardline approach.

On Tuesday, the President signed three executive orders that largely direct reviews of Trump-era policies, including the establishment of a task force designed to reunite families separated at the US-Mexico border.

"I'm not making new law, I'm eliminating bad policy," Biden said at the White House, flanked by Vice President Kamala Harris. "This is about how America's safer, stronger, more prosperous when we have a fair, orderly, and humane legal immigration system."

Before taking office, building up refugee admissions had been a focus between the Biden transition team and the Department of Homeland Security, which plays a role in the process, a source familiar with the discussions previously told CNN.

Each year, the administration sets a limit on how many refugees may be admitted to the US. Historically, the number of admissions has fluctuated according to world events, though it's generally been high.

From fiscal years 1990 to 1995, for example, many refugees arriving in the US were from the former Soviet Union, according to the Pew Research Center.