Key lines from the unveiling of Biden's science team 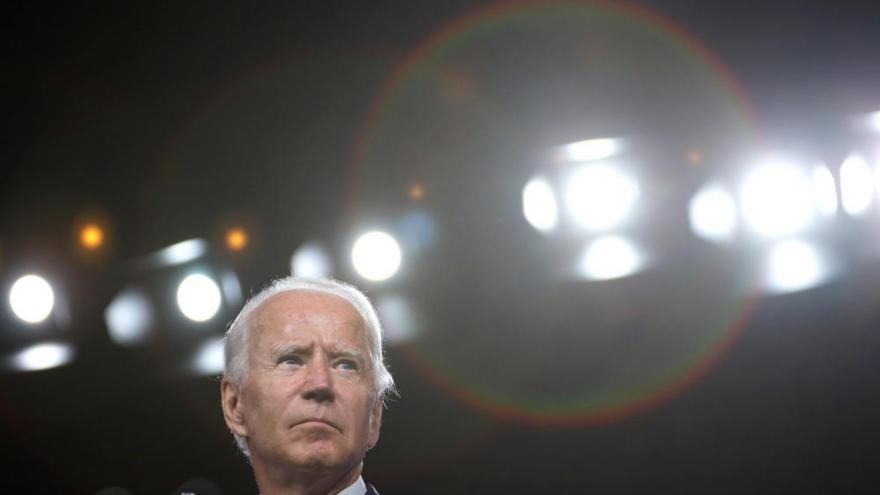 (CNN) -- President-elect Joe Biden on Saturday introduced key members of his White House science team, including his nominee for director of the Office of Science and Technology Policy.

"These are among the brightest, most dedicated people not only in the country but the world," Biden said in Wilmington, Delaware.

Eric Lander is the President-elect's nominee to lead the OSTP and will serve as a presidential science adviser.

"For the first time in history, I'm going to be elevating the presidential science adviser to a Cabinet rank, because we think it's that important," Biden said.

Biden has picked Alondra Nelson as the OSTP deputy director for science and society. He has also chosen Maria Zuber and Frances H. Arnold to serve as co-chairs of the President's Council of Advisers on Science and Technology. Kei Koizumi will be OSTP chief of staff, while Narda Jones will serve as OSTP legislative affairs director.

Dr. Francis Collins will stay on as director of the National Institutes of Health.

Biden described the OSTP and the president's council as "two of the most extraordinary, least-known departments, especially the last four years, at the White House." He said they are "composed of some of the most brilliant scientific minds in the world."

Biden said when he served as vice president he had an "intense interest" in what these departments were working on, "and I paid enormous attention, and I was like the kid going back to school. I would sit down and say, can you explain to me, and they were, they'd be very patient with me."

"They're the ones asking the most American of questions: What next? What next? Never satisfied. What next? And what's next is big and breathtaking. How can, how can we make the impossible possible," Biden said.

Biden said when he announced in 2015 that he would not run for president in the 2016 cycle he had only one regret: "That I wouldn't get to be the president to preside over cancer as we know it."

Biden said addressing cancer would be a priority of his and Vice President-elect Kamala Harris, and would be a signature issue for incoming first lady Jill Biden.

Eric Lander, nominee for director of the Office of Science and Technology Policy and presidential science adviser-designate

"The President-elect knows that science and technology will be crucial in meeting this moment. And he has tasked us in this letter, I don't mean just his scientific advisers, I mean the whole scientific community and the American public with answering important questions about how science and technology can best be used to advance our health, our economic welfare and our national security. He's asked us to rise to this moment, to draw lessons from the pandemic, to seek bold new climate solutions, to propel technologies that'll create new industries and new jobs, to ensure that the benefits of progress are shared broadly among all Americans, and to nurture, replenish and strengthen the scientific community."

"For an academic whose work stands at the intersection of technology, science and our social fabric, there is no mistaking the power and meaning of the moment we are living through today. Of course science and technology have permeated nearly every aspect of our lives throughout the course of human history. But perhaps never before in living memory have the connections between our scientific world and our social world been quite so stark as they are today. The Covid-19 crisis has inflicted extraordinary suffering but it has also held up a mirror to our society, reflecting in its deadly wake resource gaps and medical disparities."

Frances H. Arnold, co-chair of the President's Council of Advisers on Science and Technology

"As a pandemic rages, taking so much and threatening all that we love, we look to science and technology for answers. Technology to stay connected to one another, science to find vaccines and light our path out of darkness. As climate change looms, we look to science and technology once more to save this precious jewel of our planet so that we might pass it on to future generations intact and in good health, as it was passed to us."

Dr. Maria Zuber, co-chair of the President's Council of Advisers on Science and Technology

"I am thrilled with the challenge and the opportunity to work together with the scientific leadership of this administration to restore trust in science and pursue breakthroughs that benefit all people. That work is especially critical today as the pandemic continues to rage. Throughout this difficult chapter my colleagues in the life sciences have proven through extraordinary sacrifice and resolve that science and scientists are part of the solution."

Lander served as external co-chair of the President's Council of Advisers on Science and Technology during the Obama administration. He helped lead the Human Genome Project and has been a pioneer in the field of genomic medicine, according to the transition team. He is the president and founding director of the Broad Institute of MIT and Harvard, a non-profit biomedical research institute.

Nelson is the president of the Social Science Research Council and a Harold F. Linder Professor at the Institute for Advanced Study. She serves on the boards of trustees of the Andrew W. Mellon Foundation, the American Association for the Advancement of Science, and the Russell Sage Foundation and is on the board of directors of the Teagle Foundation and the Data & Society Research Institute, according to the transition team.

Arnold was the first American woman to receive the Nobel Prize in Chemistry in 2018, according to the transition team. She is the Linus Pauling Professor of Chemical Engineering, Bioengineering and Biochemistry and is the director of the Rosen Bioengineering Center at the California Institute of Technology.

Jones served as the senior technology policy adviser and counsel for the Democratic staff of the Senate Committee on Commerce, Science, and Transportation. She started working in the Senate in 2014 after holding senior roles at the Federal Communications Commission for more than a decade.

Koizumi serves on the Biden-Harris transition team and previously served as senior adviser for science policy at the American Association for the Advancement of Science. He also worked in the Obama administration as the assistant director for federal research and development and senior adviser to the National Science and Technology Council at OSTP.

This story has been updated with details from the event.