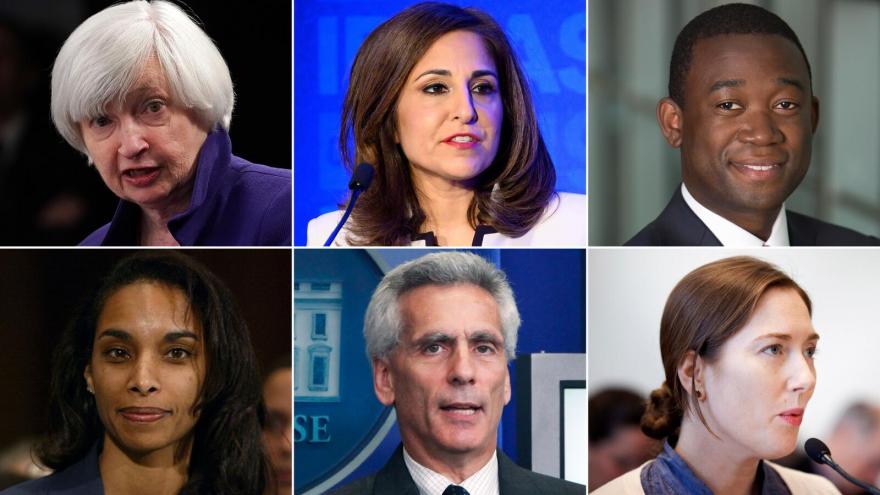 (CNN) -- President-elect Joe Biden on Tuesday introduced key members of his economic team at an event in Wilmington, Delaware, including Janet Yellen, who would be the first woman to serve as Treasury secretary.

"A first-rate team that's going to get us through this ongoing economic crisis and help us build the economy back, not just build it back, build it back better than it was before," Biden said. "A team that's tested and experienced, and includes groundbreaking Americans who come from different backgrounds but who share my core vision for economic relief here in the United States of America."

Biden also announced his plans to appoint Jared Bernstein, a longtime economic adviser to Biden, and Heather Boushey, one of Biden's chief economic policy advisers during the campaign, as members of the Council of Economic Advisers. Bernstein and Boushey do not need Senate confirmation.

Biden has moved quickly to build out his administration and name a diverse group of key White House senior advisers and Cabinet posts. The President-elect has long pledged to shape an administration that looks like and reflects the diversity of the country.

Adeyemo currently serves as the president of the Obama Foundation. He served in many roles during the Obama administration, including the President's senior international economic adviser, deputy national security adviser, deputy director of the National Economic Council, the first chief of staff of the Consumer Financial Protection Bureau and senior adviser and deputy chief of staff at the Department of the Treasury.

Tanden is the CEO and president of the left-leaning Center for American Progress and the CEO of the Center for American Progress Action Fund. Tanden previously served as a senior adviser for health reform at the US Department of Health and Human Services. She was the director of domestic policy for the Obama campaign, and served as policy director for Hillary Clinton's first presidential campaign. The announcement of Tanden sparked more outrage than any nominee has so far, with progressive Democrats and Republicans expressing opposition.

Rouse has served as the dean of the Princeton School of Public and International Affairs, as well as a professor of economics and public affairs at Princeton University. She previously served as a member of President Barack Obama's Council of Economic Advisers, and also worked at the National Economic Council in the Clinton administration as a special assistant to the president.

Boushey has been one of Biden's chief economic policy advisers during the campaign and was named as a member of the Council of Economic Advisers. Boushey is a longtime economic counselor to Biden and currently serves as president and CEO of the Washington Center for Equitable Growth, a nonprofit she cofounded in 2013.

Bernstein is a longtime economic adviser to Biden and was named as a member of the Council of Economic Advisers. Bernstein previously served as the executive director of the White House task force on the middle class and as an economic adviser to President Barack Obama. He was also the deputy chief economist at the Department of Labor under President Bill Clinton.