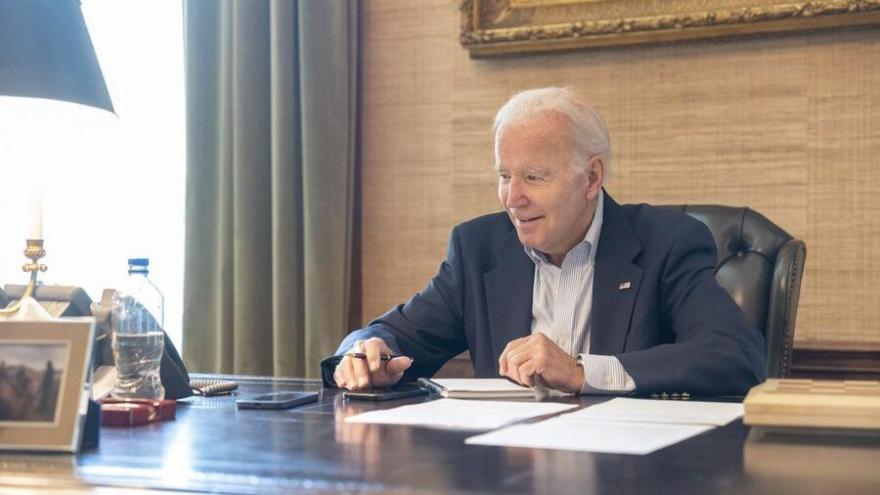 President Joe Biden speaks virtually during a meeting with his economic team in the South Court Auditorium on the White House complex in Washington, on Friday, July 22.

(CNN) -- President Joe Biden's Covid-19 symptoms "have improved," his physician said Friday, but the President has taken additional medications to address his temperature and cough.

Dr. Kevin O'Connor said in a letter that Biden had a temperature of 99.4 degrees Thursday evening, which was treated with Tylenol. His temperature has remained normal since then, according to Covid response coordinator Dr. Ashish Jha.

Biden, who had asthma when he was younger, is being treated with an albuterol inhaler "that he uses as needed," O'Connor added, as well as "oral hydration." The President has used the inhaler a few times since testing positive, Jha said during Friday's White House press briefing, adding that Biden last used an inhaler last fall when he had a cold.

Friday's letter states that Biden is suffering from a runny nose, fatigue and what O'Connor described as "an occasional non-productive, now 'loose' cough."

O'Connor has yet to publicly answer questions about Biden's illness and Jha, who has not personally examined the President, has instead been left to answer medical questions about his condition. Jha said he had spoken with the President on a video call Friday and has spoken extensively with O'Connor.

O'Connor reiterated in his Friday letter that he anticipates "that (Biden) will respond favorably," to treatment. Biden will continue to isolate and be monitored "closely" by the White House medical unit.

Biden on Friday continued to work, ate breakfast and lunch, and is in a "very good mood," officials told reporters at the White House briefing.

White House press secretary Karine Jean-Pierre relayed that Biden said over FaceTime that he wants the American people to know "he is still putting in eight-plus hours of work a day and that he wants to remind Americans to get vaccinated."

Jha relayed during the briefing Biden is in good spirits, slept better Thursday night and was eating full meals.

"He showed me his plate," Jha said.

However, he was not able to relay specific information such as Biden's oxygen levels or his latest temperature, only saying that the President is within the normal ranges.

Some members of the White House press corps have called on the White House to take additional transparency measures in the wake of Biden's Covid diagnosis, including having Biden's doctor appear on camera for a briefing and releasing specific vital numbers.

"You have heard from Dr. O'Connor in the letter. We are fully committed to transparency here. You're going to hear every day from Dr. O'Connor through written communication. He was going to put out his own statement with this assessment of how the President's doing," he said.

Jean-Pierre on Friday would not commit to having O'Connor brief reporters while Biden has Covid.

Dr. Anthony Fauci, Biden's chief medical adviser who has served as the director of the National Institute of Allergy and Infectious Diseases for decades, on Friday told CNN's Wolf Blitzer that he was "not in that loop about the decision about who is going to be out there speaking."

"I believe they feel that given the questions that are asked that the combination of having someone like Dr. Jha or myself, who speaks with the doctor, who is the primary doctor, is good enough," Fauci said, noting that it could always change.

Fauci told Blitzer that he is "in very close contact" with O'Connor and that Biden "is really doing quite well."

Fauci last month tested positive for Covid-19. Like Biden, he was also treated with Paxlovid.

"He has symptomology still, but it is improving," Fauci said of Biden. "We fully expect, given the fact that he's vaccinated, he's doubly boosted, and he's on a very effective anti-viral drug, Paxlovid, that clearly has a very good track record in preventing people to progress to severe disease. And that's the reason why although there's never any guarantee, we feel quite optimistic that the President is already on his way to recovery."

Biden tested positive for Covid-19 on Thursday morning, becoming the second US president to contract the virus during the two-and-a-half year pandemic. He continues to recover and work in isolation within the residence of the White House.

On Friday afternoon, Biden appeared virtually at a meeting with his economic team on gas prices, telling his team that he's feeling better than he sounds.

"Let me start by apologizing for my voice, I'm feeling much better than I sound," Biden said at the top of his remarks before moving on to the topic of gas prices. The President exhibited a deep voice in the video and was heard coughing while his advisers briefed. He also had a pack of cough drops on his desk, which he reached into after coughing.

Reporters, who were in the White House's South Court Auditorium with the rest of the economic team in the meeting, asked Biden how he was feeling, to which he replied with a smile and a thumbs up.

Biden held a call with his national security team on Friday morning. And he also received a written message from President Xi Jinping of China "wishing him all the best" for his Covid-19 recovery, said National Security Council coordinator for strategic communications John Kirby.

Kirby also told reporters that Biden's illness has had no impact on US national security decision-making.

In a series of updates on Friday, the White House said Biden spent Thursday evening calling Delaware Sen. Tom Carper, who also tested positive for Covid-19 and speaking with the hosts of events he had been scheduled to attend in Wilkes-Barre and Philadelphia, Pennsylvania. The White House also relayed that Biden signed the Formula Act into law on Thursday, which suspends tariffs on certain formula products amid the ongoing shortage.

Meanwhile on Friday, Vice President Kamala Harris took part in an extended conversation at the annual National Urban League conference in Washington. The vice president -- who tested negative on Friday and is not exhibiting any Covid symptoms -- was maskless throughout the conversation despite being considered a close contact to Biden.

A White House official had told CNN on Thursday that Harris would follow CDC guidelines, which recommend that vaccinated individuals wear a well-fitting mask for 10 days following the last contact. Harris appeared to be at least six feet away from Birmingham Mayor Randall Woodfin, who led the conversation and put her mask on as they exited the stage at the end.

First lady Dr. Jill Biden, who is also considered a close contact to the President, is not exhibiting any Covid symptoms and tested negative on Friday, her spokesman Michael LaRosa told CNN. She remains at home in Wilmington, Delaware, and plans to stay there until at least Tuesday.

The White House has identified and informed 17 people that they were close contacts of Biden's, but no staff members have tested positive so far, Jean-Pierre said.

White House officials have been preparing for months for what many viewed as the inevitability that Biden would come down with Covid.

A wave of cases has swept Washington through the spring and summer and as more and more of his top officials and members of his family contracted Covid, officials came to believe it was possible the President himself would get sick, even as they took steps to shield him from the virus.

White House officials had a loose plan in place for the day Biden tested positive, including informing the public when the tests were confirmed and releasing a letter from Biden's physician daily about the President's condition.