Biden: 'I am not banning fracking' 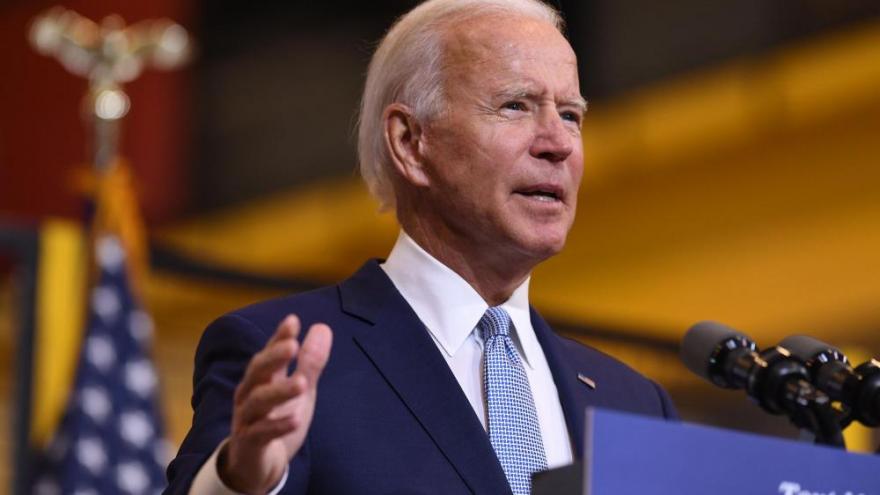 (CNN) -- Democratic presidential nominee Joe Biden said Monday he would not ban fracking in the United States if he were elected president, refuting repeated false claims by President Donald Trump about his stance on the issue.

Fracking has been a key election issue, particularly in the crucial battleground state of Pennsylvania, which has a long history with the fossil fuel industry. Some former Democratic presidential candidates, like Vermont Sen. Bernie Sanders and Massachusetts Sen. Elizabeth Warren, had called for a nationwide ban on fracking because of environmental concerns.

Fracking, or hydraulic fracturing, is a controversial method of drilling that involves shooting high pressure water, sand and other compounds underground to make small fractures in rock to release oil and gas. The practice has led to a drilling boom in the US. By some estimates, fracked oil wells accounted for more than half of US oil production in 2018.

Environmental activists have pushed for a nationwide ban on fracking. There have been questions about the effect fracking has on drinking water, methane emissions, and it has been tied to a rise in earthquakes. The Environmental Protection Agency "found scientific evidence that hydraulic fracturing activities can impact drinking water resources under some circumstances," and the US Geological Survey determined that a few earthquakes in Oklahoma were linked to fracking-related practices.

Trump said at an event earlier this month in Pennsylvania that Biden was "no friend of Pennsylvania" and claimed, "You're not going to be allowed to frack anymore ... No oil, no gas, no nothing." Trump made the remarks hours before Biden delivered his speech at the Democratic National Convention officially accepting the Democratic nomination for president.

Biden's environmental plan calls for "Requiring aggressive methane pollution limits for new and existing oil and gas operations." The former vice president said at a 2019 CNN climate crisis town hall that he does support stopping all "oil drilling or gas drilling on federal lands." He said existing wells should be examined to see if they are dangerous and whether they have caused damage.

Biden has proposed spending $2 trillion over four years on clean energy projects and ending carbon emissions from power plants by 2035. He released a climate plan in July that shifted toward progressives' goals of urgently reducing fossil fuel consumption to combat the climate crisis. His proposal, which received praise from progressive groups, was more ambitious than the plan he had put forward during the Democratic primary, which included the goal of achieving net-zero emissions by 2050.