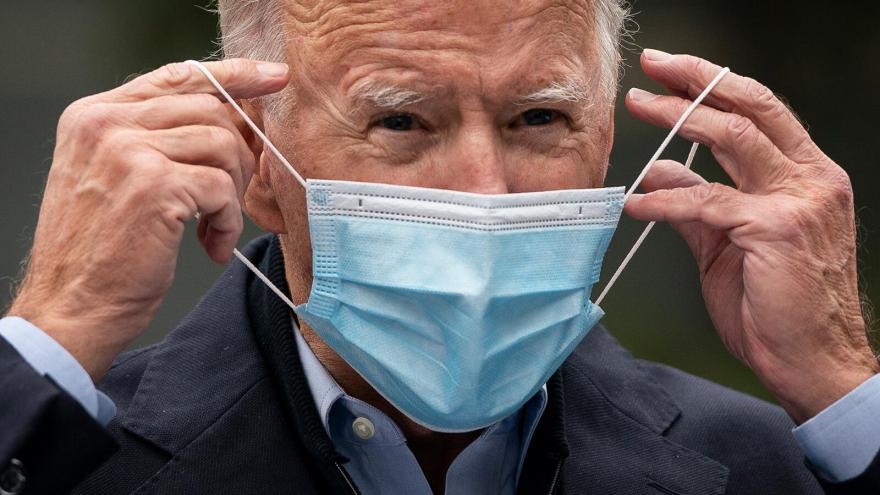 Then-Democratic presidential nominee Joe Biden puts on a face mask while speaking to reporters at a voter mobilization center on October 26, 2020, in Chester, Pennsylvania.

(CNN) -- Top Biden health officials and some White House officials are holding preliminary conversations on revising mask recommendations for vaccinated Americans as the Delta variant spreads throughout the US, according to multiple sources familiar with discussions.

Officials have weighed whether guidance should be revisited after the US Centers for Disease Control and Prevention dropped its mask mandate for vaccinated individuals earlier this year. Under discussion is what messages on masking the White House offer and what guidance the CDC should issue, the sources say. White House officials have repeatedly said it will be up to the CDC whether to change official guidance.

"At the White House, we follow the guidance and advice of health and medical experts. Public health guidance is made by the CDC, and they continue to recommend that fully vaccinated individuals do not wear a mask. If you are not vaccinated, you should be wearing a mask," a White House official told CNN.

Administration officials insistent that science will guide the process, acutely aware that any official or non-official changes to mask rules would be a psychological blow for a country well into its second year of pandemic-related restrictions. When President Joe Biden emerged in the Rose Garden in May to herald the CDC announcement that masks were no longer required for vaccinated Americans, he declared it "a great day in America;" new guidance to mask up would inevitably underscore the not-so-great predicament currently facing the nation.

But now that the Delta variant makes up over 80% of cases in the US, officials have weighed whether vaccinated people should begin wearing masks again indoors.

These discussions were given new urgency this week after the American Academy of Pediatrics recommended that everyone over the age of 2 wear masks when they return to school. One source familiar with the conversations said the administration is also considering recommendations that more heavily emphasize Americans should follow local guidance when it comes to wearing a mask indoors or for children at school.

The Biden White House has been careful not to overstep with the nation's top health agencies, a break from the previous administration, and one official insisted that any updated guidance would have to come from the CDC itself. According to one source familiar with internal discussions, the health agency is internally reconsidering its stance on mask orders. A third person familiar with the ongoing talks said they aren't far enough along yet to make a determination on masks but are weighing the best way to proceed.

"At this time, we have no intention of changing our masking guidance," CDC spokesman Jason McDonald told CNN.

Another source in communication with the White House said officials they spoke with showed little appetite for any sort of federal mask mandate, expressing hesitancy of wading into what has now become a political flash point.

On the AAP decision, Dr. Anthony Fauci, Biden's chief medical adviser and the nation's top infectious disease expert, said he believed the recommendation was made as "the extra step of caution," adding that the CDC is looking carefully at the AAP recommendations and "hopefully we'll have some now concordance of the recommendations."

State and local health officials that talked to CNN were mixed on whether they wanted additional mandates or recommendations from the federal government. One Republican state official said that their state was unlikely to follow any sort of new masking guidance, regardless of an increase in cases.

The CDC has also been in regular in touch with state officials on potential mask orders and other mitigation steps.

"The CDC has been spending a lot of time trying to work through the issue of masking and figure out what to do next, and whether or not they need to be reconsidering things," Dr. Marcus Plescia, chief medical officer at the Association of State and Territorial Health Officials, said. "They're really struggling with it."

Some local health officials are hoping for updated federal guidance as cases continue to spike to help with mitigation.

"What we're seeing is some resistance from local health departments to step in front of the CDC guidance, but they might have to," Lori Freeman, the chief executive officer of the National Association of County and City Health Officials, said, noting that Los Angeles county had just taken the step of implementing a mask mandate.

"However, community by community making those decisions when the whole of the country seems to have rising cases can be problematic with what we've been through with the politicization of the public orders."

CORRECTION: An earlier version of this story contained an incorrect reference to the pediatrics group that recommended everyone over the age of 2 wear masks when they return to school. It is the American Academy of Pediatrics.