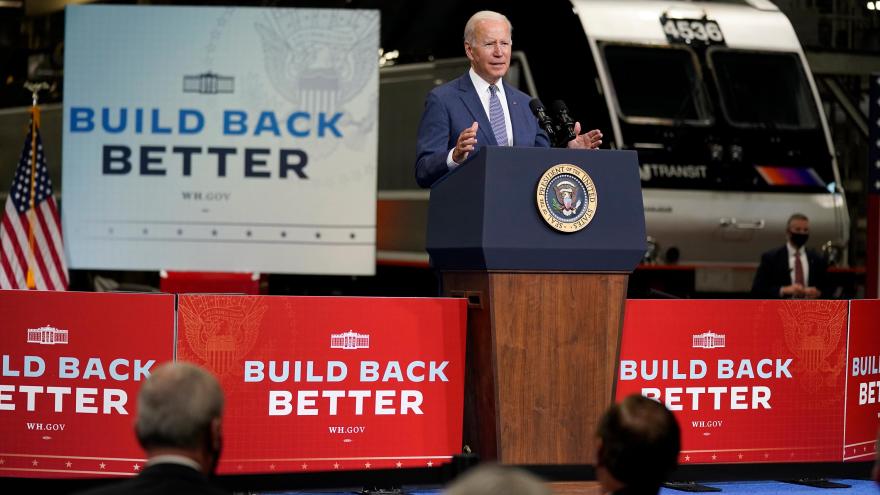 (CNN) -- President Joe Biden departs this week on his second foreign trip under markedly different circumstances than his first.

June's three-stop tour of Europe was a parade of "America is back" reassurances, but this week's excursion to summits in Italy and the United Kingdom will reflect a more workmanlike attempt to unify US partners against the world's most pressing challenges.

At the same time, the trip has become a potent intersection of Biden's domestic and foreign agendas as he pleads with Democrats to agree on a sweeping spending package before Air Force One takes off for the Group of 20 summit in Rome on Thursday.

"It would be very, very positive to get it done before the trip," Biden told reporters this week, making an appeal to a higher power to see his ambitions realized: "With the grace of God and the goodwill of the neighbors."

It was a sign of how paramount the President views his success at home to his goals overseas. In private meetings, the President has acknowledged his credibility is at stake on this trip, locking eyes with lawmakers and warning that America's prestige is on the line as he works to secure a deal on the bulk of his domestic agenda, including measures to combat climate change.

Climate is a topic he's expected to discuss Friday morning during an audience with Pope Francis, a historic meeting between the nation's second Catholic President and a pontiff whose views on migration, income inequality and the environment closely match Biden's. Later, he plans to deliver a major climate speech when visiting the COP26 summit in Glasgow.

Biden is still widely regarded overseas as a salve after four years of former President Donald Trump, whose antagonistic presence at international summits often rattled alliances. Yet at the G20 and the subsequent climate talks in Scotland, Biden will find himself under fresh scrutiny.

The initial glow of Biden's victory has faded somewhat abroad, where some leaders have begun questioning the new President's commitment to strengthening traditional alliances.

A chaotic withdrawal from Afghanistan left foreign allies angry and freshly skeptical of Biden's willingness to work cooperatively on global issues. A deal to provide Australia with nuclear-powered submarines angered France so deeply that the country's foreign minister suggested it was something Trump might have done -- a comparison that deeply irritated Biden, according to a person familiar with his reaction.

"This has been a sobering four-and-a-half months for our European partners. And I think they have now come to the realization, to the acknowledgment, that there is much more continuity in US policy than they thought," said Heather Conley, director of the Europe and Russia program at the Center for Strategic and International Studies.

"This is going to be a very different trip," Conley said, comparing Biden's second foreign excursion to his first. "Our European partners very much thought that the Biden administration would be a stabilizing presence after the tumultuous years of the Trump administration, and they need America to be that stabilizing force because Europe itself is unstable and increasingly fragile. And so, this backdrop is very different."

Speaking ahead of Biden's departure, White House national security adviser Jake Sullivan said the US and Europe were "united" ahead of this week's summits, despite the events of the last several months. He noted Russian President Vladimir Putin and Chinese President Xi Jinping had both decided to skip the gatherings, leaving Biden and European leaders to define the contours of the talks.

"I would point out that neither China nor Russia will be attending the summit in person at the leader level, largely, it seems due to Covid-19. The US and Europe will be there, and they'll be there energized and united at both the G20 and COP26 driving the agenda, shaping the agenda as it relates to these significant international issues," he said.

Since the last time he went abroad, Biden's political fortunes have suffered as Americans grow weary of the coronavirus pandemic and economic side-effects -- like inflation and labor shortages -- begin having an effect on everyday life. Biden plans to focus intently on supply chain issues and energy prices with leaders at the G20, according to White House officials.

For the first time, the President's approval ratings fell below 50% amid the messy Afghanistan withdrawal, though the issue is not expected to play a central role in this weekend's summit. Instead, officials said the principal objective of the G20 is to cement support for a global minimum tax, another key element of Biden's domestic economic agenda.

The President and his team hope successful passage of his spending package alongside a bipartisan infrastructure bill can help revive Biden's standing among Americans.

That includes major emissions-cutting provisions, though he has faced opposition from key moderate Democratic Sen. Joe Manchin, who represents coal-rich West Virginia. Biden has pledged to halve US greenhouse gas emissions by 2030 and is hoping to use that promise to convince other countries at the Glasgow climate summit to take similarly ambitious steps.

White House officials have discussed alternative ways to promote clean energy and reduce carbon emissions in meetings with environmental groups, though it's unclear what Manchin will be willing to support. People familiar with the discussions said the options being weighed include new home improvement credits for energy sources like wind and solar, expanding grants for industries to shift to clean energy and tax incentives to encourage use of renewables.

The White House said before Biden left for Europe that his foreign counterparts were astute enough to recognize he was trying to secure new climate action, even if he hasn't done so by the time he arrives in Scotland.

"I think you've got a sophisticated set of world leaders who understand politics in their own country and understand American democracy and recognize that working through complex, far-reaching negotiation on some of the largest investments in modern memory in the United States, that that takes time. And so, I don't think that world leaders will look at this is a binary issue -- is it done, is it not done," Sullivan said.

But Biden's desire to arrive in Europe with an agreement extends beyond just climate. The guiding mantra of his entire foreign policy is proving democracies can deliver for their people to counter the spread of authoritarianism. Gridlock in Congress and a dysfunctional American political system could undercut that message as he seeks to gather support for it abroad.

"I need this to go represent the United States overseas. I need people to see that the Democratic Party is working, that the country is working, that we can govern," he told a group of progressive lawmakers in a meeting last week, according to one of the participants.

Biden's first appearance at a G20 summit -- where the world's largest industrial economies gather annually -- will be dampened somewhat by the ongoing global pandemic.

The President's aides once hoped to schedule an in-person meeting with Xi on the margins on the G20, as Trump did in 2018 in Argentina. The two men have yet to meet face-to-face, despite escalation tensions between Washington and Beijing. But Xi hasn't left China since the start of the pandemic.

Instead, he and Biden plan to hold a virtual summit sometime in the coming months. Sullivan said Tuesday a date hadn't been selected.

Biden's most-watched bilateral meeting at the G20 will instead be with French President Emmanuel Macron, who reacted in fury when Biden announced an agreement last month to help Australia develop nuclear-powered submarines. The deal, which transpired without Macron's knowledge, deprived France of a contract worth billions to provide Australia with conventional subs.

The outrage in Paris over the agreement caused some eye-rolling in Washington, where officials were quick to point out Macron is facing reelection early next year. Nonetheless, Biden placed a conciliatory phone call to Macron where he conceded the communication surrounding the deal could have been better. And he agreed to a one-on-one meeting at the G20.

The two men will sit down on Friday after Biden's meeting with Pope Francis at the Vatican.