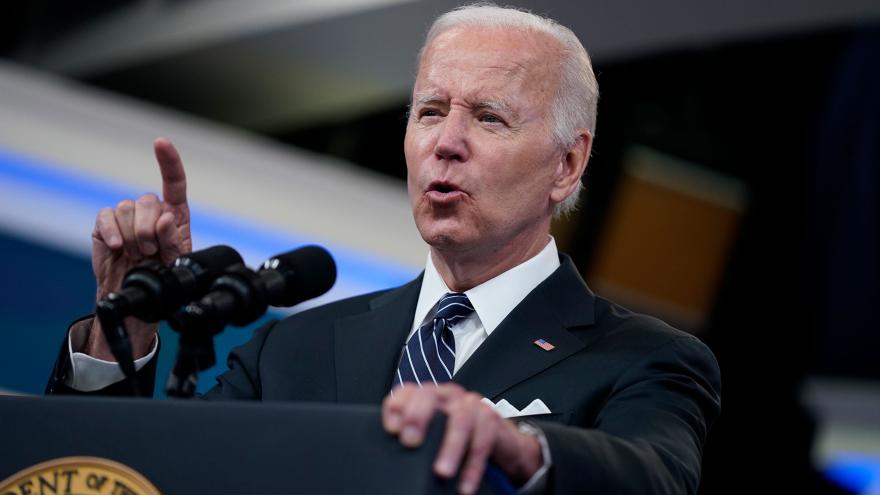 (CNN) -- President Joe Biden departed Saturday for a week of summits in Europe, where the grinding war in Ukraine -- entering its fifth month and fading from Americans' attention -- will be thrust back to the forefront.

Biden hopes to announce new sanctions and military assistance alongside European allies during his visits to Germany and Spain. Both the Group of 7 and NATO summits will hear from Ukrainian President Volodymyr Zelensky, who continues to appeal to the United States and other countries for more help.

Yet big questions loom over the talks in Germany and Spain, most importantly whether the united western response to the conflict can be sustained -- particularly as leaders face the threat of a global recession and growing anger at home over rising prices for gas, food and other goods.

The looming economic crisis has caused serious political problems for many of the leaders, Biden included. That has led to new conversations, and some fractures, among allies over how to bring the war in Ukraine to an end, even as it appears poised to slog onward.

Here are five things to watch at the G7 and NATO summits:

Keeping up the pressure

After several rounds of western sanctions, Moscow is feeling the pinch. But while the fighting has shifted eastward away from Kyiv, Moscow's incremental gains have led to increasing US and European anxiety at the trajectory of the war.

At the same time, sanctions on Russian oil and gas have helped contribute to a surge in energy prices, leading to pain at the gas pump. And the war's effect on Ukrainian grain exports has led to a surge in food prices and the threat of a hunger crisis in poorer nations, a topic expected to be discussed this week.

The ensuing political fallout has led to questions over leaders' willingness to maintain the pressure campaign as the war grinds on.

"Ukraine is going to loom large, and the big question is around whether this group is going to be able to take forward the sanctions," said Matt Goodman, senior vice president for economics at the Center for Strategic and International Studies in Washington.

Zelensky will appeal for more sanctions and more military assistance when he appears virtually at the G7 and NATO. And US officials said Biden plans to unveil steps alongside other leaders to increase pressure on Russia for its invasion -- though they declined to say what they would look like.

At the same time, Biden expects the group to discuss steps to stabilize energy markets, an issue one official said would be at the "heart of the discussions" at the castle in the Bavarian Alps where the G7 is convening.

At the start of the war, western leaders rallied behind a sanctions regime to isolate Russian President Vladimir Putin. But months later, how to bring the war to an end — and potentially end the sanctions that are helping drive inflation — have led to strain.

British Prime Minister Boris Johnson, who visited Kyiv for the second time last week, has positioned himself as a top ally of Zelensky and insists Ukraine "must win." French President Emmanuel Macron, meanwhile, has warned against "humiliating" Russia. And along with German Chancellor Olaf Scholz, he has maintained open channels of communication with the Kremlin.

That has sometimes put them at odds with Biden, who accused Putin of genocide and war crimes while also saying -- at the end of his last visit to Europe -- that he "cannot remain in power." Biden's Defense secretary said after his own visit to Ukraine that Russia must be "weakened."

"I mean, every country speaks for themselves. Every country has concerns for what they're willing to do or not do. But as far as the alliance goes, it truly has never been stronger and more viable than it than it is today," said John Kirby, the coordinator for strategic communications at the White House National Security Council.

Those differences could make for intense conversations this week, when the leaders will inevitably need to discuss how the conflict will end — either through Ukrainian concessions, more concerted work toward brokering a ceasefire or just months of endless fighting.

"I don't think anybody can know for sure," Kirby said this week when asked how much longer the war would last.

Ultimately, the biggest threat to western resolve could be fatigue among leaders and their populations at a war without a clear path to ending.

"It was clear from the start that it's going to get more and more difficult over time, because the war fatigue is coming," said Prime Minister Kaja Kallas of Estonia earlier this month on CNN. "New crises emerge, but also that we move on, and if we put sanctions, then, first, they're going to hurt Russia, but then they're also going to hurt our side."

There was a time when this week's NATO summit in Madrid was seen as a potential welcoming party for the alliance's newest members. But plans for fast-tracking Sweden and Finland's recently applications to join were scuttled by roadblocks thrown up by Turkey and its president, Recep Tayyip Erdogan.

The delay has led to frustration that what could have been a powerful signal to Putin has instead become bogged down by Turkish demands.

Erdogan accused the countries of harboring "terrorist" organizations that he claims threaten his country's security, in particular Kurds from Turkey and elsewhere. He's demanded extradition of certain followers of a US-based opposition leader, who he blamed for a failed coup in 2016.

US officials are still confident the two countries' applications will eventually be successful. And they said Biden would likely discuss the matter on the sidelines of the meetings with officials from various countries, including Turkey.

But they expressed little confidence Erdogan's concerns could be resolved by the end of the summit — scotching hopes for a grand welcome in Madrid.

At last year's G7 summit on the Cornish coast in English, Biden pressed fellow leaders into inserting tough new language condemning China's human rights violations into a final communiqué. Leading up to the document, the group had at-times heated conversations behind closed doors about their collective approach to China.

The topic can make for fraught conversations since some European leaders do not necessarily share Biden's view of China as an existential threat. Yet the President has made repeatedly clear he hopes to convince fellow leaders to take a tougher line. And Russia's invasion of Ukraine has amplified the President's oft-spoken warnings of autocracies versus democracies.

"I think it is fair to say last year marked an important watershed with respect to the G7, speaking for the first time to China's coercive economic practices," a senior administration official said this week. "We expect that that is going to be, if anything, a bigger a topic of conversation."

At NATO as well, leaders will include China for the first time in the final "strategic concept" document, particularly the long-term challenges China poses to European security. For the first time, the summit will include leaders from Asia, including from Australia, Japan, New Zealand and South Korea, as guest participants.

And Biden plans to make a renewed effort at launching a global infrastructure partnership meant to advance low-and-middle income countries, another attempt to challenge China's reach.

G7 countries will also discuss their goal to reduce fossil fuel use and take meaningful steps toward addressing the climate crisis. But the race to get off Russian natural gas in Europe and to ease gasoline prices in the US has thrown a wrench in these countries' climate commitments -- and they are quickly running out of time to meet their targets.

After the EU touted a sped-up clean energy transition in response to Russia's invasion of Ukraine, individual European countries -- including Germany and the United Kingdom -- are moving back to coal to replace the lost gas. And Germany is also looking to Africa for new gas supply.

"Germany starting to backtrack and Chancellor Scholz looking at doing a new deal with Senegal on gas supply. That's a worrying sign for the G7 unity in May for shifting out of fossil fuels," Alex Scott, climate diplomacy and geopolitics program leader at global climate think tank E3G, told CNN. "What's happening in Germany at the moment is sending the wrong message."

Similarly, Biden and his administration have made bringing down gas prices their top priority at home, with Biden recently backing a gas tax holiday opposed by many members of his own party. Scott also told CNN she's looking for concrete commitments from the US on phasing out coal, something it has struggled to do in past climate negotiations.

"It's time for the US to actually put some new policy on the table," Scott said. "That means clarifying when and how the US is going to end its obsession with coal. The change in government and the wave of climate ambition and target setting that brought is kind of expired now."