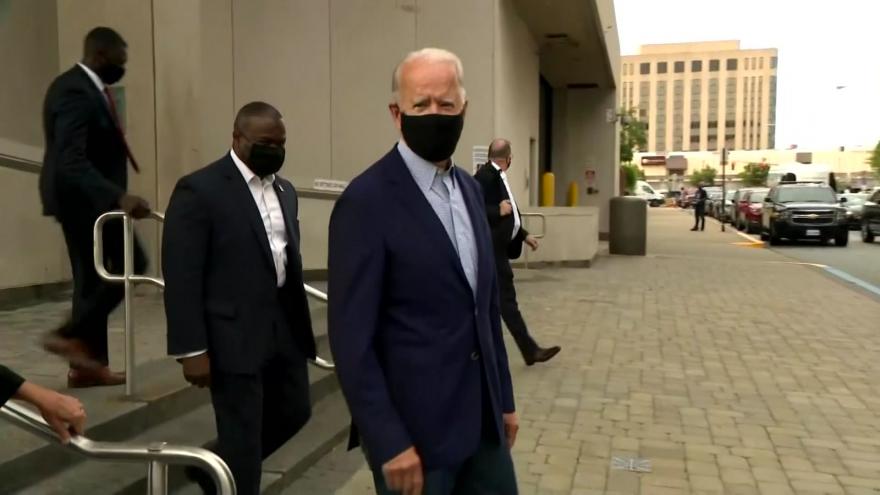 Biden’s campaign announced Sunday that the Democratic presidential nominee would be campaigning in Manitowoc, a city of about 32,000 that’s on the shores of Lake Michigan about 80 miles north of Milwaukee. Biden did not immediately release any additional details about the visit.

Biden is coming back to the state as the number of COVID-19 cases has topped 100,000, which he referred to in a statement Sunday as a “grim milestone.” Wisconsin ranks seventh in the country for new cases per capita in the last two weeks, according to The COVID Tracking Project.

“After deliberately downplaying the virus’ severity — Trump still has no plan to get it under control and has proven himself utterly incapable of guiding us through this moment,” Biden said. “It didn’t have to be this bad.”

The stop comes less than three weeks after Biden made his first visit to Wisconsin as the nominee. Biden on Sept. 3 went to Kenosha in the wake of the police shooting of Jacob Blake. His stop there came two days after President Donald Trump also came to Kenosha, where he thanked police for their response to sometimes violent protests.

Wisconsin Republican Party Chairman Andrew Hitt reacted to Biden’s visit with a statement saying the Democratic candidate is “desperately trying to reverse his eroding support amongst middle-class Americans” and claiming that Trump has a stronger record on trade.

Trump returned to the state last week for a rally in Mosinee in the central part of Wisconsin.

Biden is campaigning in a county that Trump won in 2016 with 57% of the vote. Trump needs to win big in more rural parts of the state like Manitowoc County in order to counter the heavy Democratic vote in urban areas.

Polls show Biden with a slight lead over Trump in Wisconsin, a state the president carried by fewer than 23,000 votes in 2016.

Biden’s wife, Jill, announced Sunday she will hold a virtual event with U.S. Rep. Ron Kind in western Wisconsin on Wednesday. Details have not been released.