Biden has left Trump's China tariffs in place. Here's why 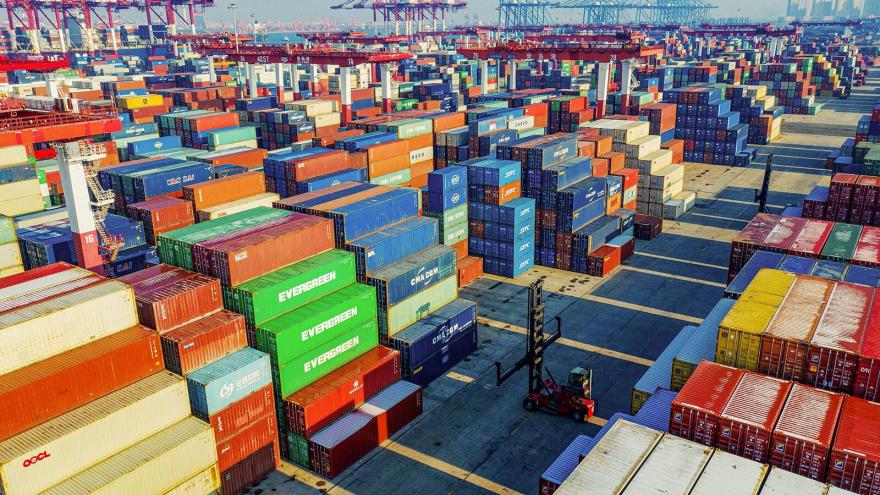 Containers are seen stacked at a port in Qingdao in China's eastern Shandong province on January 14, 2020. Donald Trump started a trade war with China three years ago, putting tariffs on roughly $350 billion of Chinese-made goods -- and despite the change in administration, those duties remain in place.

(CNN) -- Former President Donald Trump started a controversial trade war with China three years ago, putting tariffs on roughly $350 billion of Chinese-made goods -- and despite the change in administration, those duties remain in place.

President Joe Biden disagreed with Trump's approach to US-China relations, but an immediate thawing of trade restrictions is unlikely after the first face-to-face meeting between US and Chinese officials grew heated, sparking an unusually public exchange of diplomatic barbs.

Taking a hard line on China has support from both Republicans and Democrats, who acknowledge that China engages in unfair trade practices that need to be addressed. A bipartisan group of senators is pushing to pass legislation as soon as next month to try to rein in China's economic influence.

Here's the status of the China tariffs:

The US still has tariffs on 66% of Chinese exports

There is currently a tariff on the majority of the goods being shipped from China into the United States. The average rate is 19% -- more than six times higher than before the trade war began in 2018, according to the Peterson Institute for International Economics. American importers pay those duties.

The taxes have raised the price for items such as baseball hats, luggage, bicycles, TVs, sneakers and a variety of materials used by American manufacturers.

China has put tariffs on American-made goods, too. About 58% of US exports to China are affected, with an average rate of 21%. That means Chinese buyers have an incentive to buy certain items from other countries where they might be cheaper without the cost of the tariff.

The tariffs on Chinese-made goods have cost American importers more than $82 billion so far, according to US Customs and Border Protection.

A report from Moody's Analytics found that the tariffs cost 300,000 jobs and 0.3 percentage points in US GDP during the first year they were in effect. Trump's constant threats to put more tariffs on or escalate the rate of existing duties created an extremely uncertain environment for imports, discouraging business investment.

Economists also assume that some of that cost is passed on to the consumer. An estimate from JPMorgan Chase found the tariffs cost the average household about $600 a year and a separate study from researchers at the NY Fed, Princeton, and Columbia University, estimated the cost at just north of $800 per household each year.

China targeted US farmers by hitting agricultural products, like soybeans, wheat and corn, with retaliatory tariffs.

Soybean farmers were hit especially hard. Exports to China, their biggest market, slowed to a trickle during for years. The price for soybeans plummeted and the amount in storage reached record highs.

But the Trump administration sent about $28 billion -- about double the cost of the 2009 auto bailout -- to help farmers stay afloat.

Trump and Chinese President Xi Jinping reached what they called a Phase One agreement in early 2020. It reduced the rate of some of the tariffs, but left them in place.

As part of the deal, China pledged to step up its purchases of American-made goods and agricultural products. But China fell more than 40% short of purchasing what it had committed to in 2020, according to Peterson Institute of International Economics.

Even at the time, experts were skeptical China would be able to meet its pledge to double the amount it bought from US farmers before the trade war started. The pandemic also played a role, slowing trade around the globe.

Still, farmers were pleased to see China buying more in 2020 that they did the year before -- even if the lofty goal was missed. The deal also includes a 2021 purchase goal.

Agriculture Secretary Tom Vilsack is optimistic about the progress China has made, telling CNBC recently that "China seems to be living up to its responsibilities."

"The bad news is: At any point in time, because of the complex nature of the China-U.S. relationship, things can happen that might affect those purchases," he added.

Trump used tariffs as a negotiating tactic, meant to hurt China's economy and pressure Beijing to agree to a new trade deal that addresses unfair trade practices, such as intellectual property theft and forced technology transfers. That's a goal that business leaders across the country, as well as lawmakers on both sides of the aisle agree on.

Some of those issues were addressed in the Phase One agreement, but things like subsidies and state-owned enterprises were left untouched.

"China agreed to make some domestic improvements. But how much of that will be enforced is yet to be determined," said Chad Bown, a senior research fellow at the Peterson Institute for International Economics.

The trade deficit was one of Trump's favorite metrics he used to argue that China was undercutting American businesses. He pledged to narrow the gap between exports and imports but the trade deficit between the United States and all other countries grew from $481 billion to nearly $682 billion during his tenure.

Still, the goods deficit with China alone narrowed after Trump implemented the tariffs. The trade gap totaled $311 billion in 2020, down from a record high of $419 billion in 2018.