Biden hails a change in 'paradigm' as he celebrates relief bill 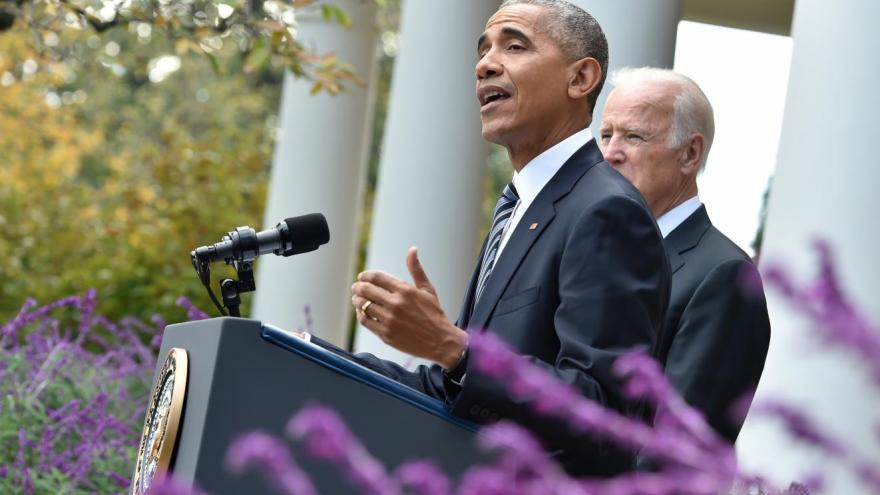 President Joe Biden, pictured with Barack Obama in 2016, will take to the Rose Garden for the first time as president, celebrating passage of his $1.9 trillion Covid-19 relief measure.

(CNN) -- President Joe Biden took to the Rose Garden on Friday for the first time as president, celebrating passage of his $1.9 trillion Covid-19 relief measure even as he acknowledged the pressure he now faces in meeting the bill's promise.

The speech was the kickoff to a weeks-long sales effort both to promote his debut legislative victory and ensure that it is working as planned.

He was surrounded by Democrats who helped secure the measure's success, including House Speaker Nancy Pelosi and Senate Majority Leader Chuck Schumer. No Republicans voted for it.

Biden cast the bill as a deeply progressive achievement that would made actionable change in poor Americans' lives.

"It changes the paradigm," he said. "For the first time in a long time, this bill puts working people in this nation first."

He took some swipes at his predecessor and made the case that trickle-down economics hadn't worked. But mostly he cast his efforts as proof Washington is still able to provide the help Americans require in the midst of a crisis.

"It's critical to demonstrate that government can function," he said.

To that end, he acknowledged the real work was only just beginning. In his speech on Thursday, Biden set out two firm deadlines for reopening the country: May 1, by which he will demand all states open vaccine eligibility to all adults; and July 4, when he says small Independence Day gatherings should proceed.

The tangible dates circled on the calendar were meant in part to provide hope to virus-weary Americans. But they also amounted to the firmest projections yet from an administration that has been cautious in providing concrete timelines for when a return to normalcy might be felt.

The challenges of providing vaccinations will be paired with the effort to distribute the relief funds included in the law Biden was celebrating on Friday. The measure contains $1,400 direct payments and an expansion of the child tax credit, both of which will be overseen by the Internal Revenue Service and the Treasury Department. The White House has said the first checks could be going out as soon as this weekend.

Biden said the rollout would require "fastidious oversight," and said "the devil is in the details of implementing this legislation."

He alluded to his time overseeing the implementation of the 2009 stimulus package. The White House has said he will name someone to a similar role this time around, and he joked with his own vice president, Kamala Harris, that she might be tapped.

"I know from experience when the President turned to me, like I haven't done to the vice president yet, and said 'take care of it,' " he said.

Like his prime-time address to the nation a day earlier, Biden's maiden outing in the Rose Garden framed him in a distinctly presidential light, the white columns and windows of the West Wing providing a familiar backdrop for signings and celebrations.

Until now, Biden has mostly held events in the State Dining Room, the smaller of the two main rooms inside the Executive Mansion, or the South Court Auditorium, a distinctly workaday space with no cell phone reception in the Eisenhower Executive Office Building.

The grander scale of the White House Cross Hall, with its red carpet and lines of flags, was a more stately setting for his first evening address on Thursday. Biden traversed the length of the hall after doors were thrust open at the other end, an exactly 30-second walk to the podium.

In the Rose Garden, Biden returned to a venue that carries a wealth of memories.

It was his predecessor's favorite place to deliver remarks, an easy 10 steps from the Oval Office to convene reporters for unwieldy press conferences. President Donald Trump was said by aides to prefer the natural lighting. His wife, first lady Melania Trump, oversaw a redesign of the Rose Garden to add paved walkways and dedicated space for television equipment.

Biden himself last stood near a podium there on November 9, 2016, joining then-President Barack Obama for a morning statement after Trump had won the presidency.

The colonnade lining the garden was stacked with downtrodden Obama staffers, shellshocked at the prospect of a President Trump.

"The path that this country has taken has never been a straight line. We zig and zag, and sometimes we move in ways that some people think is forward and others think is moving back. And that's OK," Obama said then.

"I've lost elections before," he went on, turning back to look at Biden, who was standing nearby. "Joe hasn't."

Biden blessed himself as the crowd of staffers laughed, somewhat ruefully.

Eight months earlier, Biden stood alongside Obama in the Rose Garden as he nominated Merrick Garland to serve on the Supreme Court. Republicans blocked the nomination and Trump filled the seat. After four years, Biden named Garland to serve as his attorney general. He was confirmed this week and began his work at the Justice Department on Thursday.

In October 2015, it was again in the Rose Garden that Biden announced he would not seek the 2016 Democratic presidential nomination after considering it for months. Reporters were summoned at a moment's notice to set up for the surprise announcement, which Biden made with his wife, Jill, and Obama by his side.

"Mr. President, thank you for lending me the Rose Garden for a minute," he told Obama as they stepped into the sun.

Biden went on to announce that, after months of agonizing following his son's death, he had decided he had run out of time to run for president.

What followed was a 15-minute speech laying out what he might have said if he had run, including indirect jabs at the candidate whose nomination he seemed to have ushered in: Hillary Clinton.