Biden gives Pope a sentimental challenge coin: 'The next time I see you, if you don't have it you have to buy the drinks' 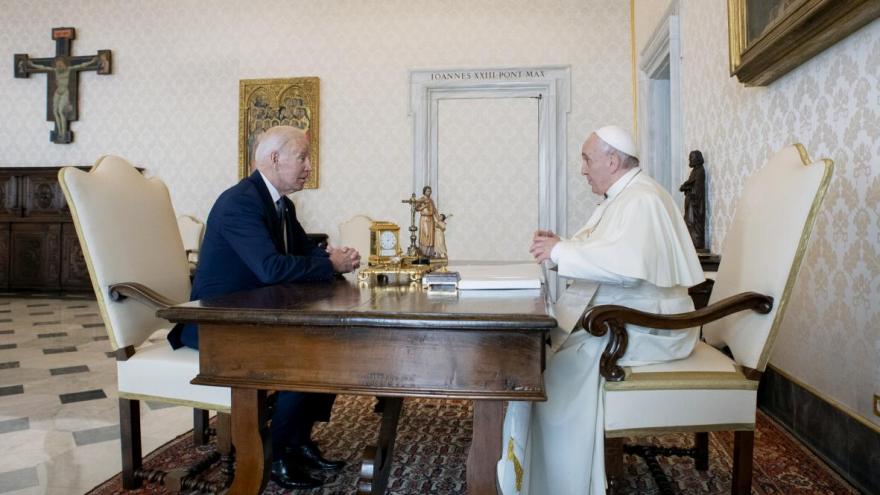 President Joe Biden gave Pope Francis a deeply personal challenge coin during his trip to the Vatican on October 29, marking the gift with a moment of light-heartedness that nods to a long tradition in the US military.

(CNN) -- President Joe Biden gave Pope Francis a deeply personal challenge coin during his trip to the Vatican on Friday, marking the gift with a moment of light-heartedness that nods to a long tradition in the US military.

In video footage provided by Vatican Television, the two men were seen exchanging a number of gifts, including what's called a challenge coin -- historically collectable pieces of recognition that originated in the military.

Biden said the coin he handed Francis included insignia of the 261st Signal Brigade unit in the Delaware Army National Guard, the unit in which the President's son, Beau Biden, served as a captain.

"With your permission I'd like to be able to give you a coin. It has a US seal on the front, but what's different with this coin, usually -- I know my son would want me to give this to you because on the back of it I have the state of Delaware and the 261st unit my son served on," Biden said, handing the Pope the large gold coin.

Beau Biden died in 2015 at the age of 46 from brain cancer. The President saw the Pope in the following months, and has warmly recalled when Francis gathered with Biden's extended family, who were still grieving, as he departed from the Philadelphia International Airport on his way out of the US. Biden has also said he corresponded with the Pope following Beau's death.

The President said during Friday's Vatican visit that the coins are given to "warriors and leaders," adding, "You are the most significant warrior for peace I've ever met."

"Now the tradition is -- I'm only kidding about this -- the next time I see you, if you don't have it you have to buy the drinks. I'm the only Irishman you've ever met who's never had a drink," Biden said to the Pope, who was laughing.

The President also gave Francis a handwoven vestment from the 1930s that came from the archival collection of Biden's Washington, DC, parish, Holy Trinity Church.

The garment is a "handwoven fiddleback chasuble" that "was commissioned by Gammarelli of Rome in 1930 and has since been utilized by the Society of Jesus in the United States," according to a White House official. The chasuble was framed by artisans in Washington, DC, with "naturally fallen wood from the White House grounds" and historic marble reclaimed from the original pulpit of the church.

The Jesuit church in Washington's Georgetown neighborhood was established in the late 1700s, was also attended by President John F. Kennedy and visited by President Abraham Lincoln.

A donation of winter clothing will be made by the White House to charities in the name of the Holy Father to commemorate the World Day of the Poor next month, the White House official said.

The Pope's gifts to the President included a ceramic tile with an etched design, as well as his recent writings.

Later, Biden -- aged 78 -- joked about age with Francis, who is 84. Relaying a story about the African American baseball player Satchel Paige, Biden described his attitude toward aging: "How old would you be if you didn't know how old you were?"