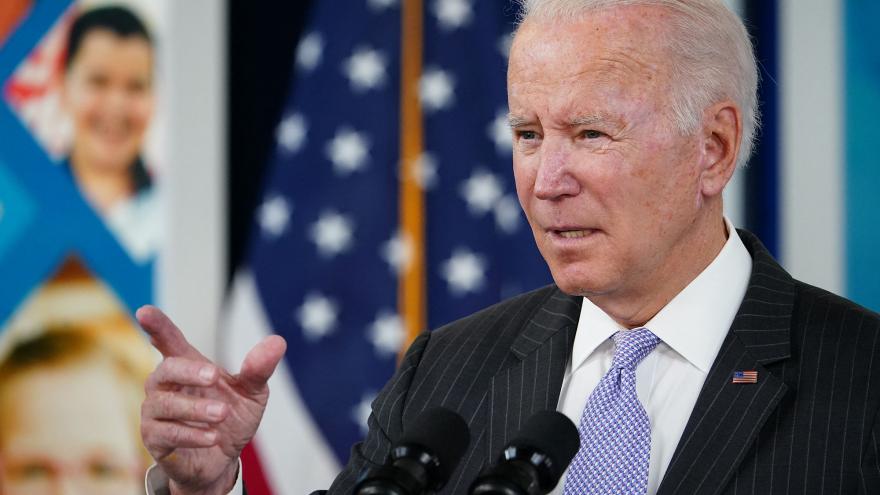 (CNN) -- Rising consumer prices have quickly become one of the White House's most urgent concerns as Americans grow unsettled at the higher cost of goods -- and place the blame on President Joe Biden.

The President has convened meeting after meeting of his top economic advisers to debate the matter, and aides now discuss multiple times per week how to address the supply chain crisis and shortages of goods that are driving up the cost of nearly everything.

In his public messaging, Biden has turned away from insisting inflation is only temporary, something he said repeatedly over the summer. Instead, he has frankly acknowledged that higher prices are obscuring the benefits -- like jobs roaring back, wages rising and the stock market surging -- of a post-pandemic boom.

"Inflation hurts (Americans') pocketbooks, and reversing this trend is a top priority for me," Biden said in a statement on Wednesday after the government reported consumer prices jumping last month. Over the past 12 months, prices climbed 6.2% -- the biggest increase since November 1990.

His statement made no mention of the trend being "transitory," a description employed by administration officials repeatedly as price concerns mounted.

Now, Biden and his team are steeling themselves for high inflation to persist into 2022 -- posing a major political problem for Democrats ahead of next November's midterm congressional elections. Treasury Secretary Janet Yellen has pointed to the "middle to end" of next year as when inflation rates may improve.

Even during moments of celebration, Biden can't avoid the topic. During a signing ceremony next Monday for a $1 trillion infrastructure bill, Biden plans to tout the new law's ability to "act against inflationary pressures," the White House said.

As he moves to the next phase of his domestic agenda, higher inflation could complicate Biden's effort to pass a nearly $2 trillion climate and social spending bill -- even though he says that plan, too, would ease inflation in the long-run.

Biden changes his tone -- and walks a delicate line

Visiting Baltimore on Wednesday, Biden sought to underscore the ways he is attempting to rein in supply chain issues that are partly to blame for higher prices. But he was frank in acknowledging the "most pressing economic concerns of the American people," and sought to explain in detail the root causes of the problem.

"Consumer prices remain too high," he said as the sun was setting over stacks of shipping containers and steadily rotating cranes. "The American people, in the midst of this economic crisis, the recovery is showing strong results but not to them. They're still looking out there, everything from a gallon of gas to a loaf of bread costs more and it's worrisome, even though wages are going up."

An unusual economic recovery has created a conundrum for Biden and his team. While he is eager to take credit for an improving economy, he also must highlight the remaining snags that are weighing down his political standing.

Ignoring them could make Biden appear out of touch with everyday struggles, some of his aides fear. The President has built an entire political career identifying with the economic hardships faced by working- and middle-class Americans.

Yet other Biden allies worry his attention on the negative has obscured the positive -- to the determent of Democrats everywhere. They would like to see the President adopt a more assertive approach in claiming economic victory.

A fresh batch of numbers last week underscored the steady improvement in the economy. Numbers from the government showed employers accelerating their hiring, adding 531,000 jobs in October. As businesses compete for workers, hourly wages also increased 4.9%.

Yet the increase in prices due to consumer inflation makes it difficult for many families to notice an increase in pay. And with more money in pockets, demand is outpacing supply.

"With more people with money buying product and less product to buy, what happens?" Biden asked in Baltimore. "Prices go up."

White House officials say Biden can hardly avoid talking about inflation and gas prices, given the centrality of those issues to Americans' lives. Even while he traveled abroad last week, Biden put supply chain issues and energy prices at the center of his talks with foreign leaders.

Yet any moves Biden makes to alleviate shipping backlogs or lower prices is likely to take time to have a real effect. And in the meantime, he is suffering the political fallout.

In a CNN poll conducted by SSRS released this week, 58% of Americans said Biden hasn't paid enough attention to the nation's most important problems. More than a third of Americans called the economy the most pressing problem facing the country (36%).

"I have no beef with voters, pardon the pun, who say, 'Look, the recovery is making progress but not far enough along for me yet,' " White House chief of staff Ron Klain said Wednesday on CNN's "The Lead with Jake Tapper."

"We've made progress on the jobs recovery," Klain added. "We now need to tackle inflation, supply chains, making sure there are workers available for the jobs that haven't yet been filled."

Since the summer, Biden's aides have been attuned to polling data showing Americans' concerns over rising prices. The numbers showed older voters, in particular, increasingly worried about higher costs for goods.

"Voters are frustrated, skeptical, and tired — of Covid, of economic hardship, of school closings, of higher prices and stagnant wages, of unaffordable prescription drugs and health care and more," read a memo from Priorities USA, the large liberal super PAC. "This is not merely about ideology or which two candidates are on the ballot. Without results (and effectively communicating those results), voters will punish the party in power."

That is largely the same assessment the White House arrived at as well.

"I think voters are in a show-me-don't-tell-me mode," Klain surmised on Wednesday.

'There is no quick fix'

Biden has taken a series of steps to unclog supply chains and, by extension, ease price increases. He's convened a supply chain task force and announced plans for ports in Los Angeles and Long Beach to operate 24 hours a day.

In Baltimore, Biden announced new investments to reduce congestion in ports by expanding capacity. And the administration has not ruled out bringing in the National Guard to alleviate trucking shortages that are contributing to the backlog or releasing barrels from the Strategic Petroleum Reserve to ease gas prices.

"There is no quick fix. If there were a light switch, we would do that," she said. "We all have to be just a little bit patient because we are seeing that the action we are taking is working. We just have to stick with it, you know, long enough to solve the problem.

Biden and his team initially dismissed concerns raised even by some Democratic economists that the stimulus bill he signed in March poured too much fuel on the economy, driving prices higher. Among those raising warnings was Larry Summers, who served in both the Obama and Clinton administrations.

The White House still contends the size of the American Rescue Plan was necessary to bring the economy back from its pandemic doldrums. And Biden himself on Wednesday touted the $1,400 checks that many American families received as part of the plan — even though he acknowledged the money helped contribute to demand outpacing supply.

"The irony is people have more money because of the first major piece of legislation I passed -- all got checks for $1,400. You got checks for a whole range of things," he said. "It changes people lives. But what happens if there's nothing to buy and you got more money? You compete for getting it there. It creates a real problem."

Some of Biden's allies fear the high inflation rate could imperil his attempts to pass the sweeping climate and social spending plan, even though he and his team insist the bill would help ease inflation in the long run.

Already, West Virginia Democratic Sen. Joe Manchin has voiced concern that more government spending could trigger higher inflation, successfully lobbying to scale back what was once a $3.5 trillion bill. On Wednesday, he raised fresh concerns, suggesting the problem was going ignored by political leaders.

"By all accounts, the threat posed by record inflation to the American people is not 'transitory' and is instead getting worse," Manchin wrote on Twitter. "From the grocery store to the gas pump, Americans know the inflation tax is real and DC can no longer ignore the economic pain Americans feel every day."