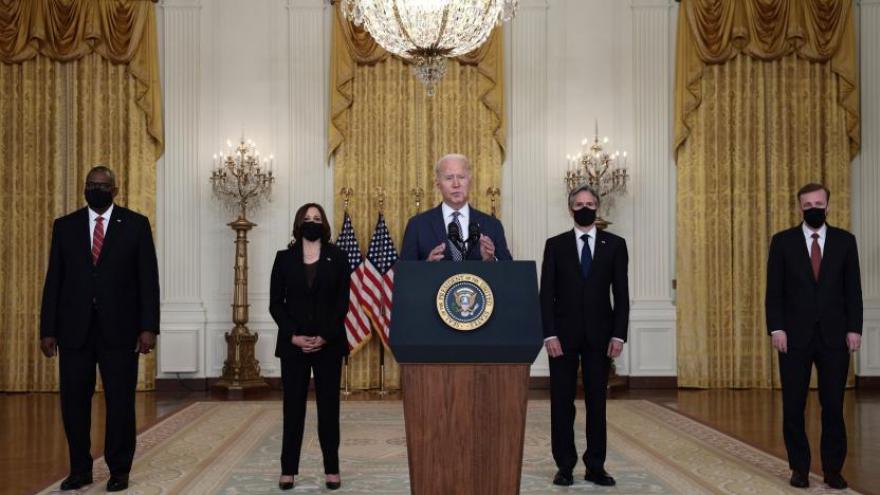 (CNN) -- President Joe Biden on Friday tried to put an optimistic face on the chaotic evacuations taking place at Kabul's airport as American forces scramble to remove US citizens and vulnerable Afghans from Afghanistan.

In remarks at the White House, Biden sought to project calm at the end of what has been a trying week for his administration. He took on criticism about how America's longest war is ending and injected more empathy for the suffering of Afghans into his remarks than he'd shown in two previous appearances.

Still, some of his comments did not square with conditions witnessed by CNN on the ground -- or some of what his own administration has since said.

After the President's remarks, Defense Secretary Lloyd Austin told House lawmakers in a call that Americans in Kabul have been beaten by the Taliban, according to multiple sources on the call. And hours after Biden claimed there was "no indication" of Americans being unable to get to the airport, a White House official acknowledged that there have been reports of Americans facing "challenge and chaos at the airport."

"It's a volatile situation on the ground," the official said.

On the call with lawmakers, Austin called the beating of Americans "unacceptable" but added that generally the Taliban were not hindering Americans seeking to get to the airport.

Asked about Austin's comments and the reports of beatings, Pentagon press secretary John Kirby said Friday, "We're certainly mindful of these reports and they're deeply troubling, and we have communicated to the Taliban that that's absolutely unacceptable, that we want free passage through their checkpoints for documented Americans. And by and large, that's happening."

In his Friday remarks, Biden also seemed to dismiss the international outcry over how the United States has handled the war's end.

Offering an overview on the evacuation mission, Biden recounted valiant efforts by US troops over the last several days. While reports from the ground indicate the scene outside Hamid Karzai International Airport is growing increasingly desperate, Biden said the US is pulling off "one of the largest, most difficult airlifts in history."

"Let me be clear: Any American who wants to come home, we will get you home," Biden said. He committed later to evacuating all Afghans who assisted in the war effort, and said the US was also working to find flights for vulnerable women, journalists and others who could be targeted by the Taliban.

"I cannot promise what the final outcome will be ... or that it will be without risk of loss," Biden said. "But as commander in chief, I can promise you I will mobilize every resource necessary, and as an American, I offer my gratitude to the brave men and women of the US armed forces who are carrying out this mission. They're incredible."

The US military used helicopters to evacuate 169 Americans from a hotel near Kabul's airport, Kirby said Friday evening, providing new details about a mission that Biden first revealed in his speech. The Americans were retrieved after another country informed US commanders that citizens had gathered at the Baron Hotel near the airport, Kirby said.

The President's speech came after days of withering criticism over how his administration prepared for the fall of Afghanistan's civilian government, which prompted chaotic and violent scenes as thousands of people sought access to the airport to leave the country.

Biden said Friday there would be "plenty of time to criticize and second guess this operation," but insisted that for now he was focused on "getting this job done."

He was flanked by top members of his national security team, including Vice President Kamala Harris, Secretary of State Antony Blinken and Austin, signaling his continued confidence in the people navigating the crisis.

Biden focused mainly on the evacuation of American citizens and their families, Special Immigrant Visa applicants and other vulnerable Afghans. While he attempted to give a positive look at the evacuation, the reality on the ground is far more dire. Afghans in Kabul are battling massive crowds and violence to make it to the airport gates, and have to wait hours to enter once they've arrived.

CNN's Clarissa Ward reported there hadn't been any flights out of the Kabul airport in more than eight hours Friday. Biden addressed the pause in his remarks and said flights in Kabul were paused for "a few hours this morning to make sure we could process the arriving evacuees at the transit points." He said the order had already been given to resume outbound flights, and said the US had evacuated 5,700 people on Thursday.

The President stressed the US was doing everything it could to provide safe evacuations for its Afghan allies, partners and Afghans who may be targeted because of their association with the United States.

"The United States stands by its commitment that we've made to these people and it includes other vulnerable Afghans such as women leaders and journalists," Biden said.

He added the US was in constant contact with the Taliban working to ensure civilians have safe passage to the airport, and said the US has communicated that any attack on US forces or disruption of its operations at the airport would be "met with swift and forceful response."

"The past week has been heartbreaking," Biden said. "We've seen gut-wrenching images of panicked people acting out of sheer desperation. You know, it's completely understandable. They're frightened. They're sad. Uncertain what happens next. I don't think anyone, I don't think any one of us can see these pictures and not feel that pain on a human level."

Still, he remained firm in his ultimate decision to end the 20-year war.

"What interest do we have in Afghanistan at this point, with al Qaeda gone?" he asked. "We went and did the mission. You've known my position for a long, long time."

Tents are needed for the thousands of Afghans standing out in the blazing sun for hours at Kabul airport, Ward reported. Mothers of children are particularly struggling in the sweltering heat. CNN has met people at the airport who have been waiting there for two days

The US Embassy warned Friday morning of continuing safety concerns over getting to the Kabul airport, and said that -- due to large crowds and security worries -- "gates may open or close without notice."

White House communications director Kate Bedingfield told CNN Friday that the White House does not have a precise number of Americans who are still in Afghanistan, saying the administration is still trying to account for Americans who may have left the country prior to August 14 without notifying the US embassy.

The Pentagon said Thursday that the US military had increased the pace of evacuations. The US evacuated approximately 3,000 people from Hamid Karzai International Airport in Kabul on Thursday, and approximately 14,000 people since end of July, according to a White House official.

Biden, who met with senior staff in the Situation Room on Wednesday, made clear he wants every flight leaving the airport filled to capacity. An official cautioned that, given the chaotic nature of the evacuation, the presidential directive doesn't always mean it will happen for every flight.

The US military hopes to move 5,000 to 9,000 people a day, but they have not been able to meet that goal since the evacuation process started.

Biden suggested in an ABC interview this week that he's willing to keep US forces in Afghanistan until all American citizens who want to leave are out of the country, but stopped short of making the same commitment to the United States' Afghan partners but said Friday he is committed to getting the US' Afghan allies out.

"There's no one more important than bringing American citizens out. I acknowledge that. But they're equally important, almost, as all those SIVs we call them, who in fact helped us," he said. "They were translators. They were in the battle with us. They were part of the operation," he added.

The President said Americans should expect for all US citizens in Afghanistan to be evacuated by August 31, the deadline the administration has set for ending the nation's longest war. Biden said a Group of Seven meeting would be convened next week to coordinate "our united approach on Afghanistan and moving forward." He noted he had spoken directly with United Kingdom Prime Minister Boris Johnson, German Chancellor Angela Merkel and French President Emmanuel Macron.

This story has been updated with additional information Friday.