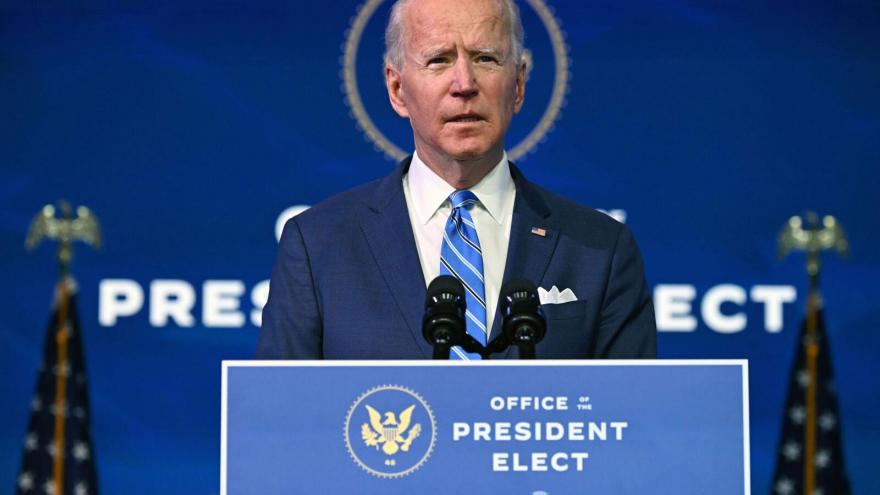 President-elect Joe Biden delivers remarks on the public health and economic crises at The Queen theater in Wilmington, Delaware on January 14. He will extend student loan payment deferrals until October.

(CNN) -- President Joe Biden is directing the Department of Education Wednesday to extend the suspension of federal student loan payments and interest.

Borrowers will not have to make payments until October 1 at the earliest, extending the already unprecedented pause on payments by eight months.

When the economy began to shut down in response to the pandemic in March, Congress passed a sweeping relief bill that automatically suspended student loan payments and waived interest. The benefit was originally set to expire in September, but was extended by the Trump administration until January 31.

Both the pause on payments and interest waiver is automatic, but only applies to federally held loans.

That covers roughly 85% of all federal student loans, including those known as direct federal loans and PLUS loans that parents have taken out on behalf of their children. It excludes some federal loans that are guaranteed by the government but not technically held by it. Generally, those were disbursed prior to 2010.

Balances were frozen in March 2020, though borrowers are allowed to continue making payments. Those enrolled in the Public Service Loan Forgiveness payment plan will still receive credit as if they had continued paying, as long as they are still working full time for qualifying employers.

Progressive Democrats are already putting the pressure on Biden to go bigger and cancel billions of dollars in student loan debt altogether. Senate Democratic Leader Chuck Schumer and Massachusetts Democratic Sen. Elizabeth Warren have called for forgiving $50,000 in student loan debt per borrower, arguing that it would provide relief to millions of people struggling due to the pandemic, stimulate the economy, and help close the racial wealth gap.

Warren has argued that the secretary of education has the authority to cancel federal student loans, a claim backed up in a memo from lawyers at Harvard's Legal Services Center and its Project on Predatory Student Lending.

But Biden may be reluctant to wipe away debt unilaterally and prefer the move be approved by Congress. It would be an unprecedented move and one that may not have the support of more moderate members of the Democratic Party. A study from the Committee for a Responsible Federal Budget found that canceling student debt would provide a relatively small boost to the economy and that most of the relief would go to those with higher incomes who tend to have more debt.

During his campaign, Biden called for canceling $10,000 per borrower. On Tuesday, Brian Deese, his pick to lead the National Economic Council, said that he continues to support Congress passing a bill that would do so.

Biden did not include any student debt cancellation in a $1.9 trillion relief plan he unveiled last week. But he push for it in a second economic bill he is expected to lay out in February that will focus on the economic recovery.

The Biden administration may be more likely to unilaterally expand more targeted loan forgiveness programs that already exist, like the one that offers relief to students who were defrauded by for-profit colleges. There are thousands of borrowers who have applied for relief under this program but have waited years to find out if they are eligible as DeVos stalled processing the claims.