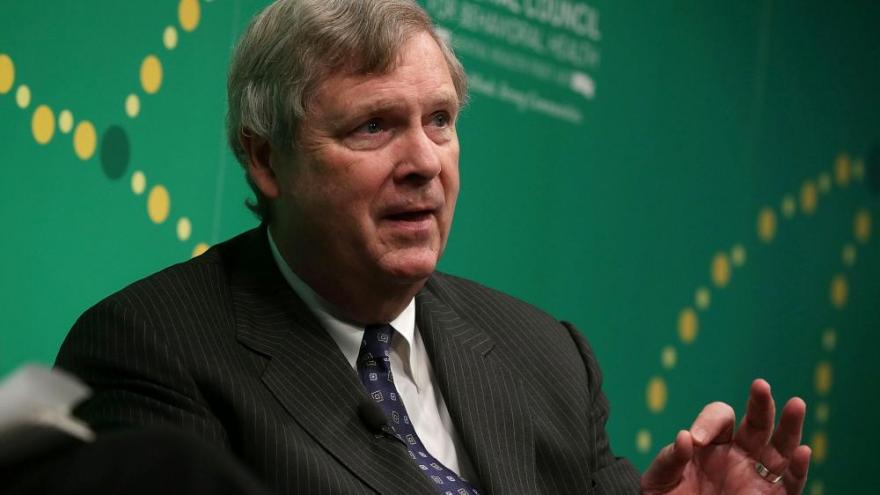 President-elect Joe Biden is expected to nominate Tom Vilsack to lead the Department of Agriculture. Vilsack is seen here participating in a discussion on "The Opioid Epidemic" on April 12, 2016, in Washington, DC.

(CNN) -- President-elect Joe Biden is expected to nominate Tom Vilsack to lead the Department of Agriculture, two sources familiar with the matter said.

One source tells CNN that the announcement could come later this week.

Vilsack served as agriculture secretary for the entirety of President Barack Obama's time in the White House. He was unanimously confirmed by the US Senate in January 2009, and served in that post until he stepped down in 2017 shortly before President Donald Trump took office.

If Vilsack is ultimately selected, he would be the latest example of how President-elect Joe Biden is filling his Cabinet and surrounding himself with longtime advisers, loyal supporters or experts in their respective fields with whom he has a great degree of comfort.

A source familiar with the situation told CNN that Biden gravitated towards Vilsack primarily because he "felt it was important to bring in someone with experience" addressing the array of issues the Department of Agriculture handles. This includes providing relief to farmers who have struggled during the trade war and Americans dealing with hunger during the coronavirus crisis.

The source added that Vilsack is seen as a confirmable pick, noting that he was confirmed by unanimous consent in 2009.

Vilsack, a former Iowa governor, and his wife, Christie, endorsed Biden during the Iowa caucuses and campaigned aggressively for him. Biden finished fourth place, which at the time he called "a gut punch," but he repeatedly expressed his gratitude to the Vilsacks for their support.

Vilsack has also expressed interest in other positions, people familiar with the matter say, including the United States trade representative. He is among several top supporters of Biden who remain in contention to key posts, including former Michigan Gov. Jennifer Granholm and Pete Buttigieg, a primary rival whose decision to leave the race helped consolidate support around Biden in March.

In 1998, Vilsak became the first Democrat elected governor of Iowa in more than 30 years. He served as governor from 1999 to 2007. During his time as governor, he served for one year as chair of the Democratic Governors Association.

In 2006, Vilsack filed a statement of candidacy to run for in the 2008 presidential race, but he dropped out of the race in February 2007. He ultimately endorsed Hillary Clinton for president and became co-chairman of her national campaign.

After stepping down as agriculture secretary, Vilsack became the president and CEO of the US Dairy Export Council. Vilsack also won a $150,000 Powerball prize in the Iowa Lottery, and claimed his prize in February of this year.

With Biden poised to select Ohio Rep. Marcia Fudge to lead the Housing and Urban Development Department, the agriculture secretary position is among the Cabinet positions that have yet to be named. Fudge had openly expressed interest in serving at USDA and had several top boosters for the post, including House Majority Whip Jim Clyburn, but he signaled Tuesday that she was pleased with the reports she was tapped for HUD.

Former North Dakota Sen. Heidi Heitkamp is also been seen as a contender for USDA.

A senior Democratic official said that while the Cabinet is shaping up to be racially diverse, the gender diversity was something that was beginning to cause concern among some Democrats, with several men named for key posts in quick order.

This story has been updated with additional information about Vilsack.