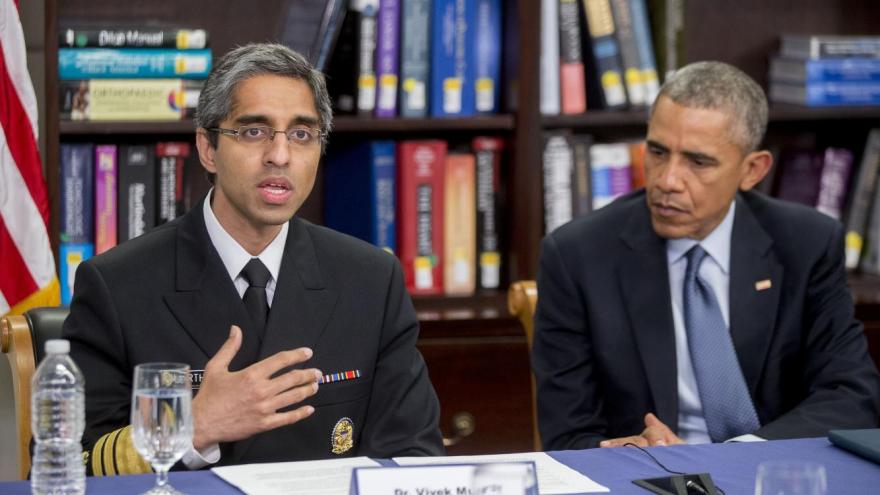 Vivek Murthy, then-US Surgeon General, speaks while participating in a roundtable discussion on the impacts of climate change on public health at Howard University with President Barack Obama in Washington, DC, on April 7, 2015.

(CNN) -- As he builds out his health team, President-elect Joe Biden on Monday announced he will nominate Dr. Vivek Murthy as US Surgeon General, a role Murthy held under the Obama administration.

As he's set to return to the same position he held from 2014 to 2017, Murthy is expected to have an expanded portfolio, two sources familiar with the matter tell CNN, as the President-elect's team crafts their plans to tackle the coronavirus pandemic.

If confirmed by the Senate, Murthy would play a key role in the administration's response to a pandemic that has killed more than 282,000 Americans as of Monday morning.

Murthy faced opposition from some Republicans during his Senate confirmation process in 2014 because of his characterization of gun violence in the US as a public health crisis. He was ultimately narrowly confirmed, but could face an uphill battle in the Senate once again if Republicans keep a majority in the chamber.

As surgeon general under Obama, Murthy helped lead the national response to the Ebola and Zika viruses and the opioid crisis, among other health challenges.

Murthy has been a top health adviser to Biden since the campaign. He was part of Biden's public health advisory committee as the pandemic first took hold in the US and has been serving as a co-chair of the President-elect's Covid-19 advisory board during the transition.

In addition to Murthy, Biden's transition team on Monday morning announced key members of a health team that will lead his administration's response to the pandemic when he takes office in January.

Biden's transition team announced California Attorney General Xavier Becerra as his nominee for secretary of Health and Human Services, Dr. Rochelle Walensky as director of the Centers for Disease Control and Prevention and Dr. Marcella Nunez-Smith as the chair of his Covid-19 equity task force.

This story has been updated with a Monday announcement from the Biden transition team.