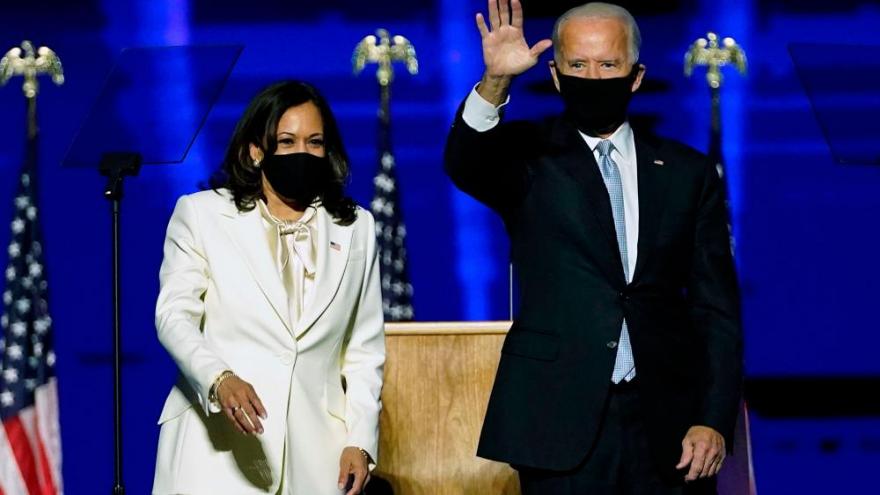 "Some are familiar faces. Some are new in their roles. All are facing new circumstances and challenges. That's a good thing," Biden said at the event. "They bring deep experience and bold new thinking. Above all, they know how government should and can work for all Americans."

The President-elect's picks were officially announced on Thursday by his transition team. McDonough, Vilsack, Fudge and Tai will all require Senate confirmation to serve in their roles. Rice will not.

"These leaders have different backgrounds and life experience, and they bring to their roles different skills, perspectives and areas of expertise, and they all reflect the very best of our nation," Harris said.

Here are key lines from the event:

"I know firsthand the character of the dedicated public servants who work hard each and every day to fulfill the mission of that department, and I'm especially grateful for the chance to get back to work alongside them. One of our first charges will need to be to contribute all we can as a department to aid in the pandemic response, reviving rural communities and economies, addressing dire food shortages and getting workers and producers the relief they need to hang on and to come back stronger."

"We need to build back a vibrant and resilient rural economy that creates new possibilities for manufacturing workers, for family forest owners, for farmers, ranchers and producers that helps to make life better and richer for them and safer for all of us. And under my watch, the USDA will be a team player, working with our sister agencies to advance issues of shared interest from rebuilding our infrastructure to fixing a broken immigration system to combating and fighting the opioid crisis."

"I remember the feeling I had as a kid of the safety, security and peace of mind contained in one word: Home. I remember the comfort of knowing that no matter what happened, I could always go home. But far too many Americans live without that feeling. More and more have had that comfort ripped away. The crisis of a pandemic that has threatened their lives, the crisis of a recession that has swallowed up jobs, hours, wages and lifelines. The crisis of injustice that has forced communities of color to make it in America with one dream tied behind their back."

"Our task at the Department of Housing and Urban Development will be to stand up for the dignity of all Americans and deliver the promise of our nation to all those left out in the cold. We will take on the deep-set roots of poverty and homelessness. We will fight for housing in every community that is affordable, decent and safe. We will help more Americans secure the dream of home ownership, to close the gaps of inequity, build wealth and pass it on to their children. We will pursue creative development projects to shape our landscapes and skylines, restart the engines of cities that have stalled out and launch new opportunities in hometowns across America. But perhaps most importantly of all, we will help people believe once again that their government cares about them, no matter who they are."

"Our men and women in uniform have had our country's back, and when they come home, we need to have their back. As the President-elect has said, his marching order to me is very clear: Fight like hell for our veterans. We're going to fight like hell to give our veterans and their families the health care, respect and dignity they deserve. That means helping our veterans build civilian lives of meaning and opportunity, making our VA even more welcoming to all veterans, including our women veterans, veterans of color and LGBTQ veterans, and keeping faith with our incredible military families and caregivers, because we need to have their backs, too."

"To the men and women of the VA, many of you veterans yourselves, you worked tirelessly to take care of our veterans and your demanding jobs have been made even more difficult by the pandemic. To you and to the many dedicated vets service organizations who include vets, survivors and their families, I look forward to being your partner, one united team in delivering care and support that's second to none."

"Trade is like any other tool in our domestic or foreign policy. It is not an end in itself. It is a means to create more hope and opportunity for people, and it only succeeds when the humanity and dignity of every American and of all people lie at the heart of our approach."

"I am proud to join with leaders who instill their policy with purpose and who never lose sight of the humanity and dignity, the opportunity and hope that make trade a force for good in our nation and the world. I am very proud to be an advocate for American workers, to stand up for their ingenuity and their innovation and for America's interests across the globe. I look forward to harnessing the power of our trade relationships to help communities lift themselves out of the current crisis, and I am grateful for this chance to serve, fight for and reflect America on behalf of all of our people once again."

"I have no illusions about the difficulty of making that vision real. But we are here to get hard stuff done. Our top priorities will be to help end the pandemic and revitalize the economy so that it delivers for all. To bring dignity and humanity to our broken immigration system. To advance racial equity, justice and civil rights for all. To ensure that health care is accessible and affordable, and to educate and train Americans to compete and thrive in the 21st century. I profoundly believe that we all rise or fall together, absolutely all of us."

McDonough served as chief of staff during Obama's entire second term and also worked as deputy national security adviser. He developed a close relationship with Biden while serving in both positions. He also chaired the National Security Council's Deputies Committee, which is responsible for formulating the administration's national security and foreign policy.

Vilsack served as agriculture secretary for the entirety of Obama's time in the White House. He was unanimously confirmed by the US Senate in January 2009. Vilsack is also the former governor of Iowa, and served from 1999 to 2007. He was the first Democrat elected governor of the state in more than 30 years.

Fudge has represented Ohio's 11th Congressional District since 2008. She serves on a number of committees, and previously chaired the Congressional Black Caucus. Prior to running for Congress, Fudge made history as the first woman and first African American to be elected mayor of Warrensville Heights, Ohio.

Rice was thought to be a contender to be Biden's vice president or secretary of state. First Obama's UN ambassador and then later his national security adviser, Rice has a long and close relationship with Biden and has deep foreign policy experience. She also served in President Bill Clinton's administration as the special assistant to the president and senior director for African affairs at the White House, the assistant secretary for the Bureau of African Affairs at the State Department and the director of international organizations and peacekeeping at the National Security Council.

Tai is seen as an expert on China trade policy, and if confirmed by the Senate, would be the first woman of color to serve as USTR. She is currently the top Democratic trade counsel for the House Ways and Means Committee. Tai played a key role in negotiating trade policy for Democrats in the United States-Mexico-Canada Agreement, which came under Trump's administration and replaced the North American Free Trade Agreement.