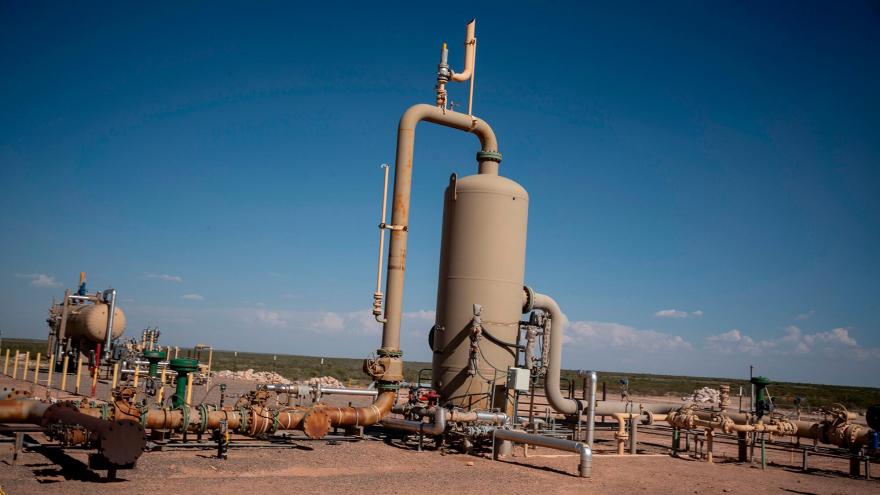 Equipment at a fracking well is pictured at Capitan Energy on May 7, 2020 in Culberson County, Texas. - For oil and gas producers in the world's largest oil field, straddling the border between Texas and New Mexico, the losses due to the collapse of oil prices are colossal.

(CNN) -- President Joe Biden signed several executive actions related to the climate crisis on Wednesday, including one directing the secretary of the interior to pause on entering into new oil and natural gas leases on public lands or offshore waters.

Biden and other administration officials have emphasized that the White House is taking a "whole of government" approach to climate change. They've also underscored that they believe the President's actions will help spur job growth, and categorized people working in industries vulnerable to job loss, such as coal miners, under their umbrella of environmental justice.

He continued: "It's a future of enormous hope and opportunity. It's about coming to the moment to deal with this maximum threat that we exist with as now facing us, climate change, with a greater sense of urgency. In my view, we've already waited too long to deal with this climate crisis. We can't wait any longer."

The executive order on oil and natural gas leases directs the interior secretary to launch a "rigorous review" of the existing leasing and permitting programs related to fossil fuel development, and to identify steps to double renewable energy production from offshore wind by 2030, according to a fact sheet provided by the White House.

The halting of new leases fulfills a campaign promise by Biden and will expand an existing 60-day moratorium issued by the President on his first day in office. Biden's climate actions mark a sharp departure from the Trump administration's efforts to maximize fossil fuel production and expand oil and gas drilling on federal lands but climate emissaries for the administration emphasized they hope to build new job opportunities out of the changes.

During the signing ceremony, Biden said his administration is "not going to ban fracking -- we'll protect jobs and grow jobs, including through stronger standards like controls for methane leaks and union workers willing to install the changes."

On the campaign trail, Biden explicitly opposed a nationwide ban on hydraulic fracturing, or fracking. He also said he supports using fracking to open underground natural gas formations to "transition" to cleaner kinds of energy.

White House climate czar Gina McCarthy described the order as one that "directs everyone who works for the President to use every tool available at our disposal to solve the climate crisis. Because we're going to take a whole of government approach."

John Kerry, the new presidential envoy for climate, discussed how workers in the fossil fuel and coal industries who may face health risks on the job have the opportunity to transition to less risky alternative energy jobs. He said they "have been fed a false narrative" that "somehow dealing with climate is coming at their expense. No. It's not. What's happening to them is happening because of other market forces."

Kerry told the press that Biden is issuing the actions because the US needs to address climate change on a global scale.

"(Biden) knows that (the Paris climate agreement) alone is not enough," Kerry said in the briefing room. "Not when almost 90% of all of the planet's emissions global emissions come from outside of US borders. We could go to zero tomorrow, and the problem isn't solved. So that's why today, one week into the job, President Biden will sign this additional executive set of orders to help move us down the road, ensuring that ambitious climate action is global in scope and scale as well as national, here at home."

Biden on Wednesday also established the climate crisis as an "essential element of US foreign policy and national security." The order instructs the director of national intelligence, Avril Haines, to prepare a national intelligence estimate on the security implications of the climate crisis and directs all agencies to develop strategies for integrating climate considerations into their international work.

Biden also reestablished the President's Council of Advisors on Science and Technology, and form the National Climate Task Force, which will be composed of leaders across 21 federal agencies and departments.

Biden will host a Leaders' Climate Summit on Earth Day, April 22, and the US will reconvene the Major Economies Forum. McCarthy said the US would announce its so-called Nationally Determined Contribution -- required in the Paris Climate Accord that Biden rejoined -- before the summit of leaders scheduled for Earth Day.

The President will establish a Civilian Climate Corps Initiative to put Americans to work with jobs that include restoring public lands and waters, increasing reforestation and protecting biodiversity.

Biden has taken a series of steps aimed at reprioritizing environmental climate issues. He halted more than 100 regulatory actions on the environment taken by the Trump administration, announced the US would rejoin the Paris climate agreement and canceled the Keystone XL pipeline. He also said Monday that he plans to replace the federal government's fleet of vehicles with American-made electric cars.

The President has sought to highlight how his administration will take science more seriously than the past administration did. In addition to appointing McCarthy as the White House climate czar, Biden has named former secretary of state Kerry as a presidential envoy for climate, which is a Cabinet-level position that also has a position on the National Security Council.

The Biden administration has told reporters to expect more briefings by scientists and public health experts, not political appointees and the President, to explain the ongoing efforts to combat Covid-19. The administration has also moved to elevate the job of presidential science adviser, a role held by Eric Lander, a principal leader of the Human Genome Project, to the Cabinet level.