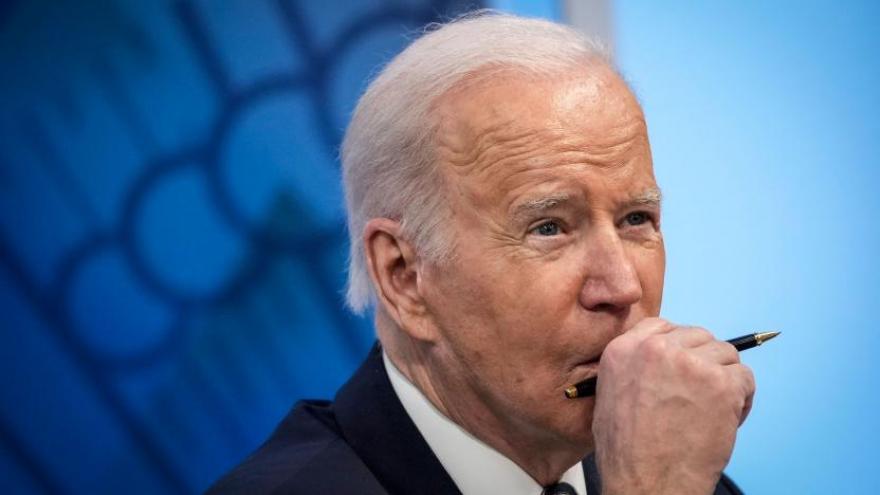 (CNN) -- President Joe Biden on Tuesday announced his administration is banning Russian oil, natural gas and coal imports to the US in response to the Russian invasion of Ukraine, a step he warned could lead to a spike in gas prices at home.

"Today I am announcing the United States is targeting the main artery of Russia's economy. We're banning all imports of Russian oil and gas and energy," Biden said in remarks from the White House. "That means Russian oil will no longer be acceptable at US ports and the American people will deal another powerful blow to Putin's war machine."

Sanctions on Russia's oil and gas industry had once been viewed as mostly off the table as officials in the United States and Europe worried about a global spike in prices. But pressure had been growing on Biden to act, including from Ukraine's President and American lawmakers from both parties, as Russia's onslaught in Ukraine increasingly targets civilians.

Biden acknowledged in frank remarks from the White House the step was likely to lead to higher costs for Americans, a potent political issue that is already leading to attacks from Republicans.

The US expected to make the move unilaterally, without its European allies, due to disagreement among European nations about whether to ban Russian energy imports. EU countries have significantly more exposure to Russian energy than the US. Not long before Biden's announcement, the United Kingdom announced that it planned to phase out Russian oil imports by the end of the year.

US officials decided, given the extreme political pressure at home, they could move without their full coalition and not create major issues. Bloomberg was first to report the move.

Biden emphasized in his remarks that his decision will likely hurt Americans at the gas pump.

"The decision today is not without cost here at home," Biden said. "Putin's war is already hurting American families at the gas pump. Since Putin began his military build-up at Ukrainian borders, just since then, the price of gas at the pump in America went up 75 cents and with this action it's going to go up further. I'm going to do everything I can to minimize Putin's price hike here at home."

The President also warned companies against price gouging during a time of crisis.

"To the oil and gas companies and to the finance firms that back them: We understand Putin's war against the people of Ukraine is causing prices to rise. We get that. That's self-evident. But, but, but, but -- it's no excuse to exercise excessive price increases or padding profits or any kind of effort to exploit this situation or American consumers, exploit them. Russia's aggression is costing us all. And it's no time for profiteering or price gouging," Biden said.

US imports from Russia make up a small slice of American energy portfolio -- roughly 8% in 2021, of which only about 3% was crude oil. White House economic officials have been engaged for more than a week as to how to manage any decision to cut off those imports, officials say. The Department of Energy reported that in the last two weeks of February, Russian oil imports dropped to zero as US companies cut ties with Russia, effectively implementing their own ban.

After Biden's announcement, House Speaker Nancy Pelosi said in a letter to colleagues that the House would vote Tuesday on a bill to ban imports of Russian oil and energy products.

Pelosi said the bill would take steps to review Russia's access to the World Trade Organization "and explore how we can further diminish Russia in the global economy," and "reauthorize and strengthen the Global Magnitsky Human Rights Accountability Act so that the United States can impose further sanctions on Russia."

"Today, President Biden again demonstrated America's strength and determination to hold Putin accountable for his premeditated, unprovoked war against Ukraine," Pelosi wrote in the letter. "The Congress commends the President for announcing action to stop the import of Russian energy products into the United States -- which we will support by passing strong, bipartisan legislation to that effect today."

The sanctions the West has slapped on Russia following its unprovoked invasion of Ukraine had so far exempted oil exports.

Biden administration officials also traveled to Venezuela over the weekend to hold discussions on potentially allowing the Venezuela to sell its oil on the international market, which would help replace Russian fuel. Biden may also travel to Saudi Arabia as the US works to convince the kingdom to increase its production. The talks underscore how Russia's invasion has upended international relations and forced the US and other nations to seek out solutions in places they typically have shunned.

The move comes as gas prices skyrocket in the US as Russia's invasion of Ukraine rocks the global oil market. The average price for a gallon of regular gas broke its 2008 record, hitting $4.14 on Monday, according to the Oil Price Information Service, the firm that collects and calculates prices for AAA. That breaks the previous record of $4.11 a gallon that has stood since July 2008.

Biden said the package of economic sanctions and export controls the US has already imposed on Russia has been causing "significant damage to Russia's economy," and that the value of the Russian ruble has tanked since Putin launched his attack on Ukraine.

"One ruble is now worth less than one American penny," Biden said. The President said Russia would not be able to boost the value of the ruble because the West has cut off Russian's largest banks from the international financial system.

"The private sector is united against Russia's vicious war of choice," Biden said.

In both public and private conversations, top American allies have said the US would likely be acting on its own should it target Russian energy imports. That raised its own concerns at the White House, as US officials remain wary of pursuing any action that would fragment the carefully coordinated alliance that has served as the focal point of the response up to this point.

However, political pressure from both Republicans and Democrats made putting off a ban untenable.

One Democrat directly involved in negotiations between the White House and Congress said that in recent days, lawmakers had exerted a lot of pressure -- both in public statements and in private outreach -- on the Biden White House to get on board with blocking Russian oil imports to the US.

As Biden himself had been saying publicly in recent days that a Russian energy ban remained on the table, his top aides were simultaneously making clear to lawmakers that they were nervous about what that could mean in terms of further rise in gas prices, the Democrat said. They also made clear to members that they were deliberating cautiously to take into account where the US's European allies stood on this issue.

Bipartisan support for banning Russian oil imports in the US had grown on Capitol Hill in recent days, with Sens. Joe Manchin and Lisa Murkowski and Reps. Josh Gottheimer and Brian Fitzpatrick introducing bills in both chambers.

A White House official said it would reject any suggestion that congressional pressure had pushed the White House into Tuesday's announcement on banning Russian oil imports, telling CNN it welcomed the support of members who had been leading on the issue. The official said the White House had conveyed to lawmakers the importance of cutting US consumption of Russian energy while at the same time mitigating the impact on global supply and working in consult with the US's allies.

The President also called on Congress to provide $12 billion in additional humanitarian, security and economic assistance for Ukraine and allies in the region. The new funds would be on top of the more than $1 billion the US has provided to Ukraine over the past year.

"Russia may continue to grind out its advance at a horrible price, but this much is already clear: Ukraine will never be a victory for Putin," Biden said. "Putin may be able to take a city, but he'll never be able to hold the country. And if we do not respond to Putin's assault today, the cost to the American people will be greater tomorrow."