Biden: 'Every indication' is that Russia will attack Ukraine 'within the next several days' 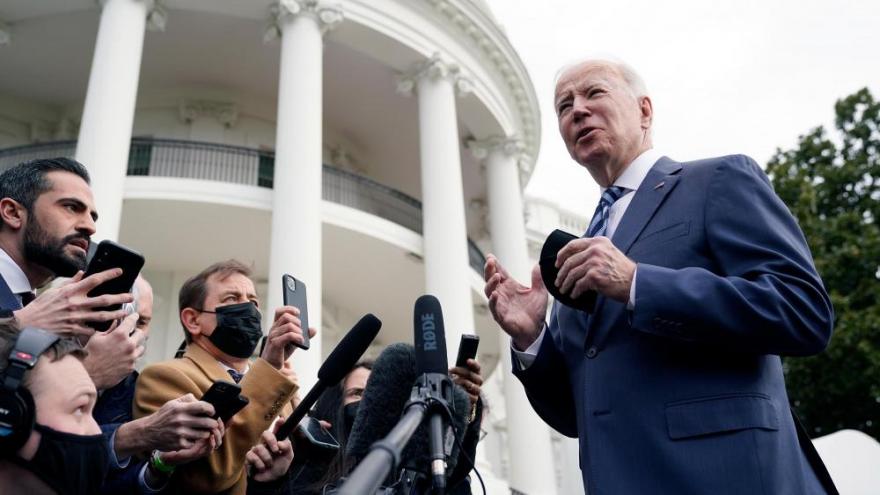 President Joe Biden on February 17 said the US believes that Russia could attack Ukraine in the next several days, despite Kremlin claims that they are withdrawing forces.

(CNN) -- President Joe Biden warned Thursday morning a Russian attack on Ukraine could begin in the coming days, casting a new incursion into the country as all but certain and warning Moscow could stage events in the lead-up to generate a pretext for war.

It was the latest sign of mistrust from the West at President Vladimir Putin's claims he is withdrawing troops and open to diplomacy. Biden, while maintaining there was a "diplomatic path" that avoids conflict, nevertheless used stark language to predict imminent violence.

"It's very high," Biden said when asked by CNN's Jeremy Diamond how high the threat level is for a Russian invasion of Ukraine.

"It's very high because they have not moved any of their troops out," he continued, speaking on the White House South Lawn before departing for Ohio, where he plans to sell the infrastructure law passed last year.

"They have moved more troops in, number one. Number two, we have reason to believe they are engaged in a false flag operation to have an excuse to go in. Every indication we have is they are prepared to go into Ukraine, attack Ukraine," Biden said.

Biden has predicted a Russian invasion of Ukraine before but has previously couched his forecast by saying Putin hadn't made up his mind. He was more definitive on Thursday, a day after US officials said 7,000 more Russian troops have arrived near Ukraine, contradicting earlier Russian claims of a pull-back.

Pressed on whether he believes an attack will happen -- and when -- Biden said: "Yes. My sense is it will happen in the next several days."

He was speaking moments before Secretary of State Antony Blinken was due to address the United Nations Security Council, a last-minute stop before heading to Germany for the Munich Security Conference. Vice President Kamala Harris also departed early Thursday for the summit, where the Ukraine crisis is expected to dominate discussion among leaders and national security officials.

Biden said he asked Blinken "to go to the United Nations and make a statement today" to lay out a diplomatic path forward. He said he also proposed diplomatic off-ramps to Putin in a Sunday telephone conversation, which lasted just over an hour.

"There is a path, there is a way through this," Biden said, adding he had "no plans" for a new call to Putin.

Earlier Thursday, the US received a response from Russia after the Biden administration gave a written document to the Kremlin three weeks ago, a senior State Department official said.

It was the latest in a back-and-forth between the two nations over their security concerns in Europe and proposals for addressing them. Neither side has framed the others' responses as sufficient.

Biden said he had not yet read the latest response from Putin.

"It's come from the Moscow embassy. They are faxing it here -- not faxing it -- they're going to send it here. I have not read it yet -- I cannot comment on it," he said.