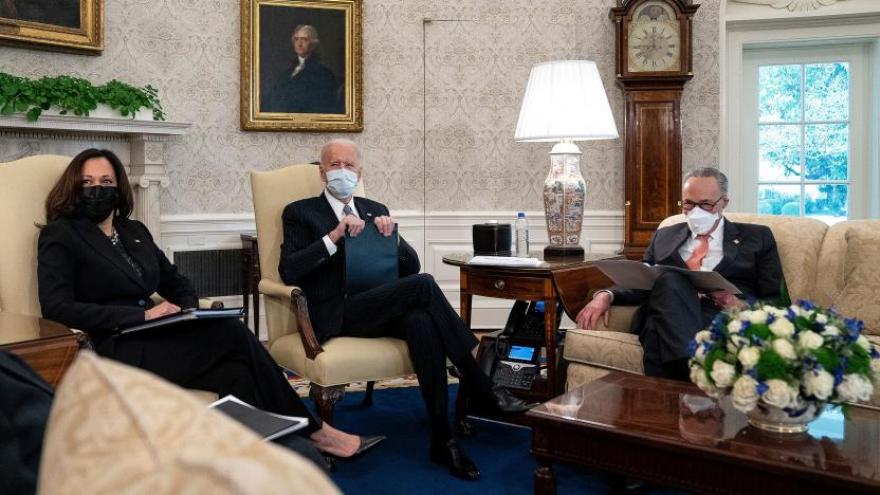 (CNN) -- President Joe Biden responded to a new, sluggish jobs report by continuing to press for his $1.9 trillion Covid relief package to be passed with urgency -- even as a leading economist who served in the Obama administration is sounding the alarm on how the White House's plan could have negative economic consequences.

"We saw the jobs report. Only 6,000 private sector jobs will be created. And at that rate, it's going to take 10 years before we get to full employment. That's not hyperbole," Biden said Friday morning in the Oval Office during a meeting with House Democratic leadership.

"I appreciate you all coming over because -- the urgency with which you're moving -- this is about people's lives. This is not just about numbers," Biden said. He added that many Americans are "really hurting" and Congress has the opportunity "to do something consequential here."

Biden's relief package includes an additional $1,400 stimulus payment, extensions of unemployment, nutrition and eviction assistance, help for states and small businesses and $160 billion to address the coronavirus pandemic, among other measures.

Citing lessons learned from his time working on the 2009 American Recovery and Reinvestment Act during the Obama administration, Biden reiterated, "We can't do too much here, but we can do too little."

The President also pushed back on Republicans' counterproposal for relief, which totaled less than one-third of the $1.9 trillion White House plan. The GOP senators would send smaller relief checks to fewer Americans, give less aid to the unemployed and school districts and provide no additional assistance to states or housing protections.

Biden signaled Friday afternoon that he would move forward with his proposal regardless of whether Republicans get on board.

"I'd like to be doing it with the support of Republicans. ... But they're just not willing to go as far as I think we have to go," Biden said during a speech at the White House.

"(It's) my preference to work together, but if I had to choose between getting help right now to Americans who are hurting so badly and getting bogged down in a lengthy negotiation, or compromising on a bill that's up to the crisis, it's an easy choice. I'm going to help the American people hurting now."

"I know some in Congress think we've already done enough to deal with the crisis in the country," he added. "Others think that things are getting better, we can afford to sit back and either do a little, or do nothing at all. That's not what I see, I see enormous pain in this country."

The President also appeared to take issue with what Larry Summers, the former director of the National Economic Council during the Obama administration, wrote in a recent Washington Post column about the Biden plan.

Summers warned that Biden's proposal is actually three times as large as the projected shortfall in economic output, whereas the 2009 measure was only half the size of the gap.

This much stimulus could cause the economy to overheat and "set off inflationary pressures of a kind we have not seen in a generation," he wrote.

Summers is also concerned that if so much is spent on relief, it will be harder for Biden to enact his "Build Back Better" recovery agenda, which calls for addressing climate change, education, injustice and infrastructure.

"If the stimulus proposal is enacted, Congress will have committed 15% of GDP with essentially no increase in public investment to address these challenges," he wrote. "After resolving the coronavirus crisis, how will political and economic space be found for the public investments that should be the nation's highest priority?"

The President has said he will unveil his recovery proposal during his address to a joint session of Congress this month.

Biden argues that his relief package would not only address the pandemic and Americans' current pain, but also prevent long-term economic damage and set up the US to compete better internationally.

"The payoff won't just be in jobs, but in global competitiveness, as well, because we will be regaining our economic strength faster," he said Friday afternoon, citing Wall Street, think tank and federal analyses that show GDP would return to pre-pandemic levels sooner if his plan is enacted.

The jobs report released Friday morning indicated that 49,000 jobs were added in January, but the country is still down nearly 10 million jobs since before the coronavirus pandemic. It also showed that the unemployment rate fell to 6.3%, beating economists' expectations, marking the first decrease in two months.

"I think he is wrong in a pretty profound way about that claim in the following sense and there's a way in which Larry's offering a warning that we've already heeded. ... I very much disagree with the thrust of the argument is that we have to go big and we have to go bold here to finally put this crisis, to finally put this virus behind us and to finally and reliably launch a robust, inclusive and racially equitable recovery," Bernstein told CNN's Poppy Harlow.

"We have consistently said the risks of going too small are much greater than the risks of too much. Now that doesn't mean there are no risks engaged in the kind of work that we're doing because that's always the case in the economy," he added.

"But what Larry is worried about here is inflation overheating," Bernstein said. "And right now, we have inflation that's been below the Fed's target rate of 2% for well over a decade."

Bernstein also said that Summers' assertion that the Biden administration "was being dismissive of any potential inflationary pressures" was "flat out wrong."

Bernstein said in a White House news briefing Friday that there are concerns about economic scarring -- "not doing enough about current damages so they become permanent damages and people can't get back into the labor market and businesses that should and would be viable on the other side of this crisis fail because we haven't taken the steps to get them through to the other side of the crisis."