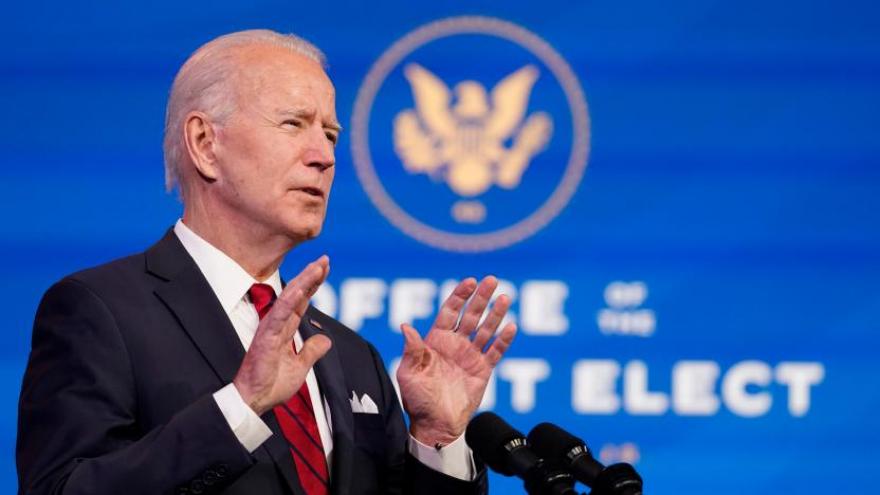 President-elect Joe Biden speaks during an event at The Queen theater, Friday, January 15, in Wilmington, Delaware.

(CNN) -- President-elect Joe Biden is elevating the director of the White House Office of Science and Technology Policy to a Cabinet-level position, a move that highlights the emphasis the incoming administration plans to put on science as it inherits a public health crisis.

Biden on Friday named Eric Lander, a principal leader of the Human Genome Project, to the post and announced several other key members of the White House science team.

"Science will always be at the forefront of my administration -- and these world-renowned scientists will ensure everything we do is grounded in science, facts, and the truth," Biden said in a statement. "Their trusted guidance will be essential as we come together to end this pandemic, bring our economy back, and pursue new breakthroughs to improve the quality of life of all Americans."

Lander will be the first life scientist to serve as presidential science adviser, according to the news release. In the same rollout, Biden indicated that Francis Collins, the director of the National Institutes of Health, who was appointed by President Barack Obama during his first term, will stay in that role.

The President-elect, who ran on a campaign that promised to prioritize science, made clear his aspirations for Lander's responsibilities in a letter he wrote to the new director.

Drawing from one of his role models, Biden told Lander that President Franklin D. Roosevelt penned a letter in 1944 to his science adviser asking him how science and technology could "best be applied to benefit the nation's health, economic prosperity, and national security" following World War II.

He tasks Lander with a similar responsibility, asking him and his team to work to provide his administration with recommendations that can set the country on course for the next 75 years.

Biden asks him to consider five main questions, including what lessons can be learned from the pandemic, how scientific breakthroughs can influence climate change and economic growth, and how the United States can ensure it is competitive with China in its technological growth.

"I believe that the answers to these questions will be instrumental in helping our nation embark on a new path in the years ahead—a path of dignity and respect, of prosperity and security, of progress and common purpose," Biden tells Lander in the letter.

In addition to Lander and Collins, Biden's team has announced that Alondra Nelson, a researcher whose work focuses on science, technology and social inequality, will serve as deputy director for science and society.

Per the release, Frances H. Arnold and Maria Zuber will serve as the external co-chairs of the President's Council of Advisors on Science and Technology.