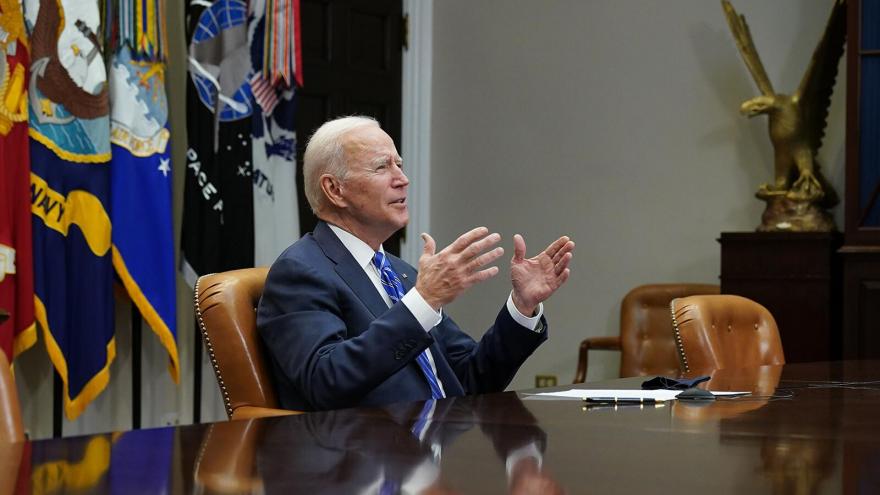 The Biden administration told the Supreme Court on Thursday that it should dismiss pending cases concerning "sanctuary cities. Biden is seen here in the Roosevelt Room of the White House in Washington, DC on March 4, 2021.

(CNN) -- The Biden administration told the Supreme Court on Thursday that it should dismiss pending cases concerning "sanctuary cities," which limit cooperation between local law enforcement and federal immigration authorities.

In letters filed with the court in all three cases related to sanctuary cities, the Justice Department said it had come to an agreement with the parties on the issue. Under President Donald Trump, the department had won one and lost two of the challenges.

The legal filing is the latest from the new Biden Justice Department changing positions from those taken by the Trump administration. Lower courts had divided over a Trump policy that directed the Justice Department to withhold federal grant funds from jurisdictions that limited their cooperation with federal immigration authorities.

A federal appeals court ruled in February last year that the Trump administration could withhold federal money from seven states, as well as New York City, over cooperation on immigration enforcement.

The decision by the 2nd US Circuit Court of Appeals reversed a lower court ruling that blocked the Justice Department from withholding a key law enforcement grant the department said was available only to cities that complied with specific immigration enforcement measures.

The Trump administration fought a lengthy feud with "sanctuary cities," taking measures like barring New York residents from enrolling in certain Trusted Traveler programs, such as Global Entry, last year. In April, as states sought federal support to combat the coronavirus, Trump teased withholding aid to cities that limit cooperation between local law enforcement and federal immigration authorities, resorting to one of his long-standing immigration issues in the throes of the pandemic.

In a statement, New York Attorney General Letitia James said local police departments should not have their decisions overridden by the federal government.

The issue dates back to early in Trump's presidency. In July 2017, then-Attorney General Jeff Sessions announced that applicants for Edward Byrne Memorial Justice Assistance Grants would have to comply with federal immigration enforcement. States pushed back and sued over the move.

Lower courts blocked the Justice Department from adding new requirements for the policing grants. In April 2018, the 7th US Circuit Court of Appeals upheld a ruling in favor of the city of Chicago.