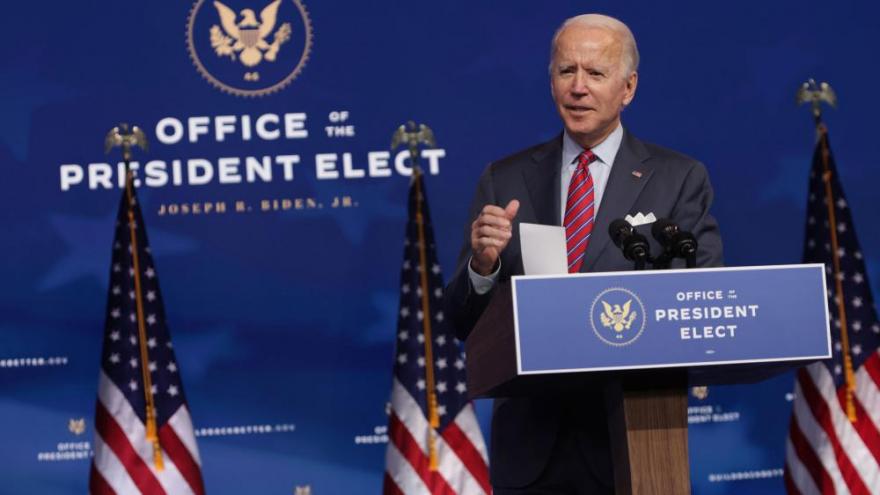 President-elect Joe Biden would aim to get at least 100 million Americans vaccinated in his initial 100 days in office. In this image, Biden speaks on November job numbers on December 4, 2020 in Wilmington, Delaware.

(CNN) -- President-elect Joe Biden on Tuesday laid out his three-point plan to combat the coronavirus pandemic, an approach in dealing with the virus that continues to contrast with President Donald Trump.

The plan, announced as he introduced the team he has designed to get the pandemic under control, would aim to distribute 100 million vaccine shots in his initial 100 days in office -- enough to cover 50 million people -- along with his pledge to sign a face mask mandate on his first day in office and efforts to get kids back to school safely. Biden's plan came the same day that Trump signed a largely symbolic executive order aimed at prioritizing the shipment of the coronavirus vaccine to Americans before other nations.

"My first 100 days won't end the Covid-19 virus. I can't promise that," Biden said at an event in Wilmington, Delaware. "But we did not get in this mess quickly, we're not going to get out of it quickly, it's going to take some time. But I'm absolutely convinced that in 100 days we can change the course of the disease and change life in America for the better."

Last week, in an interview with CNN's Jake Tapper, the President-elect said he will ask Americans to wear masks for the first 100 days after he takes office.

On Tuesday, Biden said his administration would prioritize vaccinating health care workers and residents of long-term care facilities, as recommended by vaccine advisers to the US Centers for Disease Control and Prevention. The President-elect also said he would vaccinate educators as soon as possible.

Biden introduced the top members of his health team who will lead his administration's response to the pandemic that has killed more than 284,000 Americans as of Tuesday afternoon, and outlined his team's first three main objectives.

In addition to the goal of at least 100 million vaccine shots, the President-elect reiterated his pledge to sign a masking mandate on his first day in office. While the President can't unilaterally require every American to wear a mask, under the law Biden said he could require masks in places like federal buildings and on planes, trains and buses for interstate travel.

Biden said the third national priority of the health team is to get kids back in school safely. He said if Congress provides the necessary funding to protect students, educators and staff -- and states cities put strong public health measures in place that Americans follow -- "my team will work to see that a majority of our schools can be open by the end of my first 100 days."

The President-elect said he drafted the objectives in consultation with Dr. Anthony Fauci, the nation's top infectious disease doctor and his newly announced chief medical adviser on the pandemic.

Biden reiterated his call for Congress to come together to pass a $900 billion Covid-19 economic relief bill in order to support struggling Americans and to reopen businesses and schools safely. He said that while immediate funding was critical, when he takes office in January, his administration will take additional action to support Americans and fund the vaccine distribution efforts.

The President-elect also called on the Trump administration "to purchase the doses it has negotiated with Pfizer and Moderna and to work swiftly to scale manufacturing to US populations and the world."

In addition to announcing Fauci, Biden this week named Xavier Becerra, California's attorney general, as his nominee for secretary of Health and Human Services and Dr. Vivek Murthy, who was US surgeon general in the Obama administration, as his nominee for surgeon general. Biden transition co-chair and former Obama administration official Jeff Zients will serve as coordinator of the Covid-19 response and counselor to the President, and Natalie Quillian, another Obama administration veteran, will serve as deputy coordinator of the Covid-19 response.

Biden had previously spoken about his plan to ask all Americans to wear masks during his first 100 days in office, and said he would work with governors and mayors to pass masking mandates in communities across the country.

The President-elect has long touted the importance and efficacy of wearing a mask in stopping the spread of the virus, providing a stark contrast to Trump.

Since the pandemic began, Trump has undercut his own medical experts and sidelined scientists. The President has refused to take basic steps to control the virus, notably declining to wear a mask in public for several months and holding large rallies with no social distancing.

Biden, by contrast, has long pledged to listen to the advice of scientists and public health experts about the pandemic. He has worn a mask at public events and stressed the importance of adhering to public health guidelines.

CORRECTION: An earlier version of this story misstated how many Americans would be vaccinated under Biden's plan and the day on which Biden made his remarks.