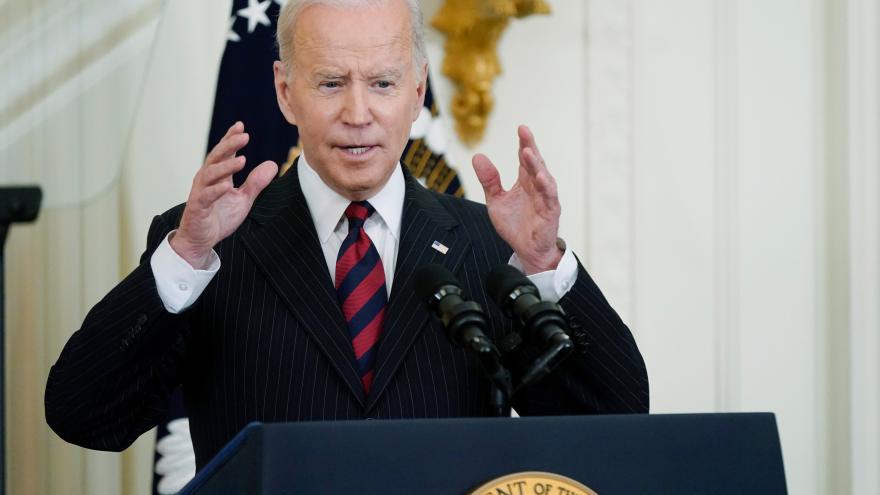 (CNN) -- President Joe Biden is using his bully pulpit to call out the tendency for gasoline prices to go up like a rocket when oil spikes, but only drop like a feather when crude crashes.

Biden fired off a tweet Wednesday morning highlighting the painfully slow decline in gasoline prices in a bid to draw scrutiny to a decades-long trend that critics say hurts consumers by failing to pass savings along to drivers.

"Oil prices are decreasing, gas prices should too," Biden said on Twitter. "Last time oil was $96 a barrel, gas was $3.62 a gallon. Now it's $4.31. Oil and gas companies shouldn't pad their profits at the expense of hardworking Americans."

The administration's focus on the intricacies of energy prices shows the level of frustration inside the White House with one of the central drivers of high inflation.

Prices at the gas pump are going down -- but only very gradually. The national average for regular gas dipped to $4.31 a gallon on Wednesday, according to AAA. That's down a penny from Tuesday and two pennies from Monday.

That's despite the fact that Brent oil collapsed by 28% between the March 6 intraday peak and Tuesday's close.

'It just seems to take a long time'

This is nothing new. The industry even has a nickname for this practice: Rockets and feathers.

"This has been going on for 40 years," Andy Lipow, president of consulting firm Lipow Oil Associates, told CNN. "Prices do dip, it just seems to take a long time. You can't deny the data that is out there."

But it may be unreasonable to say pump prices should change instantly just because oil prices do. It takes time for price swings to filter through the supply chain.

A gas station owner may be selling fuel today that was purchased days earlier when oil prices were much higher. (That's especially true in today's extremely volatile market.)

"Don't get me wrong. There would be some lag," Lipow said. "What if I was the guy who just bought my tanker load yesterday and the next two days crude oil dropped?"

Tom Kloza, global head of energy analysis at the Oil Price Information Service, said gas stations have little choice but to pass along the impact of higher oil prices on the way up because of the pressure on their profit margins.

Joe Brusuelas, chief economist at consulting firm RSM, noted that gasoline prices are a function of past purchases and expectations around the cost of future deliveries -- and there is vast uncertainty right now about the direction of oil prices.

There are real economic consequences here.

Every 10-cent increase in the price of gasoline costs consumers at least $11 billion over the course of a year, according to Moody's Analytics.

Gas prices have surged over the past year and a half, and at the end of last week, they stood about $1.50 a gallon higher than the 2019 average. If prices stay this high, consumers will pay $165 billion more over the course of 2022 than they did in 2019, according to Moody's Analytics.

Put another way: Annual average spending on gasoline would climb by roughly $1,300 per US household, Moody's told CNN.

The senior White House official suggested gas station owners are not passing along savings to consumers as quickly as they could.

"This is using price power in a way that is not particularly fair from the perspective of the consumer," the official told CNN.

GasBuddy's Patrick De Haan said earlier this week the gas price drop should accelerate if oil stays below $100 a barrel.

"Stations lost their shirt on the way up, but now margins are improving and they will start passing the discounts on to you," De Haan wrote on Twitter.

Of course, the oil industry was in deep distress just two years ago. Oil prices crashed, with US crude turning negative for the first time ever, driving gasoline prices dramatically lower.

The National Association of Convenience Stores, a trade group that represents the fuel retailing industry, did not respond to a request for comment.

There is some academic research that supports the argument from the White House.

The Federal Reserve Bank of St. Louis published a report in 2014 pointing out there is an "uneven" relationship to how oil prices impact gas prices. That report was based on a review of academic work measuring the so-called pass-through of oil and gasoline.

Who owns the gas?

Biden's focus on this issue comes after House Democrats wrote a letter last week urging Congressional leadership to immediately investigate and hold hearings on "alleged price gouging within the oil and gas industry."

Although gas stations are often emblazoned with the logo of a major oil producer like Exxon or Shell, they are often owned and operated by independent retailers. Gas station owners are licensed to represent that household brand.

For example, ExxonMobil says it does not own or operate retail gas stations in the United States, even though there are countless Exxon and Mobil gas stations throughout the country. As of the end of 2020, Exxon listed nearly 11,000 distributor sites in the US.

Oil refiners own less than 5% of the nation's roughly 150,000 retail gas stations, according to the American Petroleum Institute. Many gas stations are owned by an individual or a family, while others fall under a corporate entity that owns hundreds.

At the end of the day, Kloza said people who can wait before buying gas will benefit.

"If you can hold off five days to fill up your tank, you will get a lower price," Kloza said.