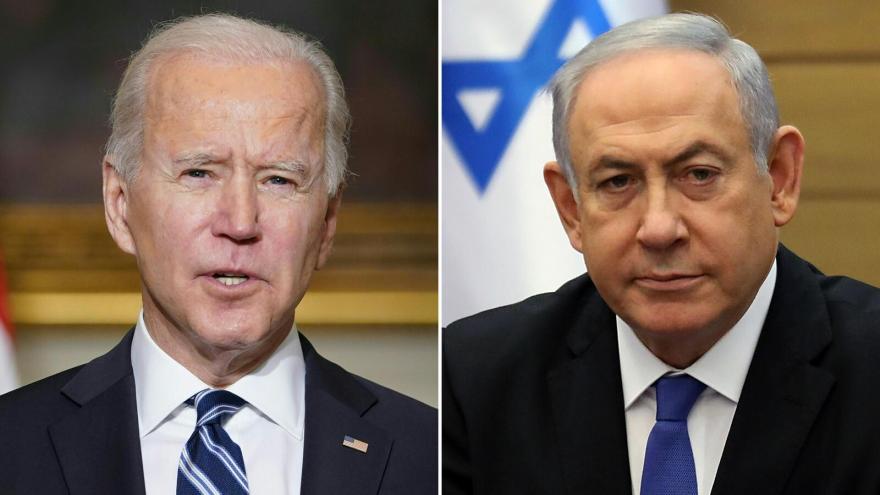 President Joe Biden has become increasingly impatient with Israeli Prime Minister Benjamin Netanyahu following a blunt phone call May 19 in which the US President set a deadline for violence to ease between Israel and Hamas.

(CNN) -- President Joe Biden -- having weathered the first major foreign crisis of his presidency that tested the bounds of his decades-long friendship with Israeli Prime Minister Benjamin Netanyahu -- touted Thursday a ceasefire deal that appears to end the bloody 11-day conflict between Israel and Hamas.

In hastily arranged remarks from the White House delivered one hour before the truce was due to take effect, Biden credited his administration's own "quiet and relentless diplomacy," along with efforts by Egypt, in arriving at the agreement.

"We've held intensive high-level discussions, hour-by-hour, literally, (with) Egypt, the Palestinian Authority and other Middle Eastern countries with an aim of avoiding the sort of prolonged conflict we've seen in previous years when the hostilities have broken out," Biden said.

The conflict and subsequent ceasefire provided an early glimpse at how Biden -- a president more versed in US foreign policy than any of his recent predecessors -- will handle rapidly evolving foreign crises. His approach emphasized private diplomacy over proactive public statements, even as he came under sustained criticism from fellow Democrats for not speaking out more forcefully.

Afterward, people who spoke to the President said Biden voiced confidence his behind-the-scenes approach with Netanyahu was successful, and said he believed it had played a critical role in ending the violence faster.

Biden did not become more combative with his Israeli counterpart until recent days, when he bluntly told Netanyahu the violence needed to stop. But he did so privately, and hardly addressed the situation in person during the 11 days it raged on.

Biden felt if he "hugged Israel close," while closely engaging with them behind the scenes, he would be able to "end the violence faster," the person who spoke with Biden told CNN.

Moments before emerging in the Cross Hall, Biden spoke again to Netanyahu, the second time they'd conferred Thursday and the sixth phone call between the two men in the past 11 days. In a conversation on Wednesday, Biden had delivered a blunt message of impatience as Israel's bombing campaign continued in Gaza.

Biden, who's been viewed as a firm supporter of Israel for his entire political career, had come under pressure from members of his own party to speak out more forcefully against Israel's actions over the past week. He chose instead to remain mostly silent on the matter in public. His remarks Thursday were his first public statement about the crisis in eight days.

The violence had exposed a rapidly shifting dynamic in the Democratic Party, where progressive members feel free to openly criticize Israel and even those who have typically supported Israel's right to defend itself called for a ceasefire.

In remarks that were designed to strike a careful balance, Biden reiterated Israel's right to defend itself from Hamas rocket attacks, and committed to helping the country replenish its Iron Dome missile defense system.

But he also made a nod to improving conditions for the Palestinians without specifically criticizing Israel's actions in the lead-up to the fighting, including the planned eviction of Palestinian families from a neighborhood in East Jerusalem.

"I believe the Palestinians and Israelis equally deserve to live safely and securely, and enjoy equal measures of freedom, prosperity and democracy," Biden said. "My administration will continue our quiet, relentless diplomacy toward that end."

The news came after Biden placed a telephone call to Egyptian President Abdel Fattah el-Sisi on Thursday as part of his effort to lean on regional leaders to help broker an end to the violence. It was his first conversation with el-Sisi since becoming president. The US does not engage formally with Hamas, which it has labeled a terror organization, and must rely on countries like Egypt and Qatar to wield influence on the group.

Entering office, Biden had not prioritized the Middle East in his list of foreign policies and has yet to name an ambassador to Israel or a special envoy.

The conflict posed an early test for the Biden-Netanyahu relationship, which has developed over four decades of intersecting political careers.

Biden had become increasingly impatient with Netanyahu, and adopted a more "direct, frank and candid" tone during a Wednesday call than during any of their previous conversations since the President took office, according to a senior administration official.

The White House used progressively more urgent language to describe each conversation between the two leaders, even as officials described a diplomatic effort focused more on behind-the-scenes pressure than public cajoling.

In their conversation early Wednesday, Biden wanted Netanyahu to take his stern warning seriously, given he had quietly waited days to deliver it, several people familiar with the matter said. Part of Biden's calculus in remaining quiet publicly had been a worry Netanyahu would ignore public demands to de-escalate.

After the White House said Biden told Netanyahu "he expected a significant de-escalation today on the path to a ceasefire," the Prime Minister emerged from a visit to an Israel Defense Forces command center to proclaim he was "determined to continue this operation." And on Wednesday and Thursday, dozens of Israeli warplanes launched a series of airstrikes on several Hamas targets.

Biden made clear to Netanyahu on the call that international pressure would increase if the military campaign continued. And he's informed Netanyahu of the new politics in the Democratic Party surrounding Israel.

But he wasn't left with any assurances from the Israeli Prime Minister that his entreaties would be heeded. Netanyahu offered Biden no specific pledge to wind down the violence.

A day later, however, Netanyahu's office said his security cabinet had accepted Egypt's ceasefire proposal, though only after what the country's defense minister described as military achievements "unprecedented in their power, precision and strategic significance, in the struggle against terror organizations in the Gaza strip."