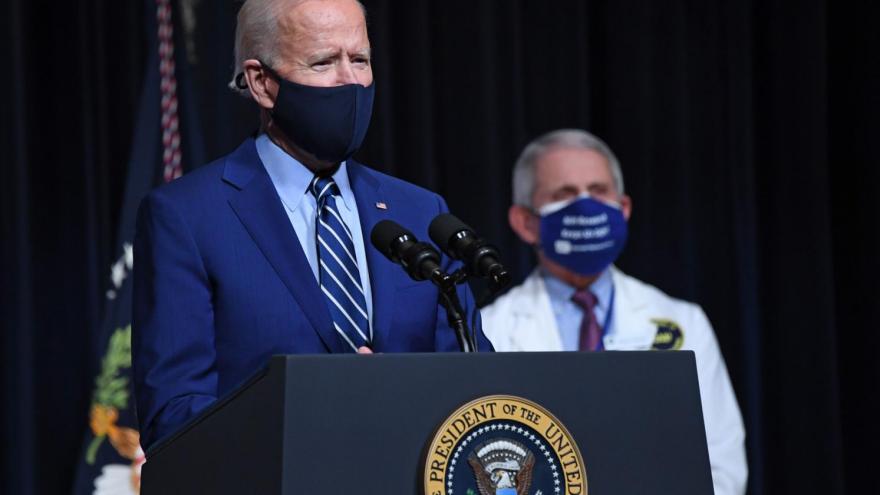 While visiting the National Institutes of Health in Bethesda, Maryland, President Joe Biden on Thursday announced that the United States will have enough coronavirus vaccines for 300 million Americans by the end of July.

(CNN) -- President Joe Biden on Thursday announced that the United States will have enough coronavirus vaccines for 300 million Americans by the end of July, underscoring that he believes his administration has made significant progress given that there wasn't a rollout plan in place under the Trump administration.

"Within three weeks, 'round the clock work with so many people standing behind me and in front of me, we've now purchased enough vaccine supply to vaccinate all Americans, and now we're working to get those vaccines into the arms of millions of people," Biden said during his speech at the National Institutes of Health in Bethesda, Maryland.

Biden used the NIH appearance to announce that the timeline for the previously announced vaccine purchases had been moved up.

The President, echoing claims made by other administration officials since the start of his tenure in office, asserted that the Trump administration "did not have a plan" for vaccine distribution.

"While scientists did their job in discovering vaccines in record time, my predecessor -- I'll be very blunt about it -- did not do his job in getting ready for the massive challenge of vaccinating hundreds of millions of Americans. He didn't order enough vaccines. He didn't mobilize enough people to administer the shots. He didn't set up the federal vaccine centers where eligible people can go and get their shots," Biden said. "When I became president three weeks ago, America had no plan to vaccinate most of the country. It was a big mess."

In the waning days of the Trump administration, officials announced they would be releasing reserved coronavirus vaccine doses that they had saved for second doses of the vaccine. However, shortly after the announcement, it became clear many of those reserves had already been released last year as production was ramping up.

Thursday's announcement pushes up the Biden administration's previous timeline for vaccinating the US population. Late last month, Biden had said the US was on track to have enough vaccine supply to fully vaccinate 300 million Americans by the end of summer or early fall.

The President also said on Thursday that the country was on track to beat its goal of administering 100 million vaccine doses into the arms of Americans in his first 100 days of office.

Earlier in his visit to the NIH, Biden aired his frustrations about the Trump administration's lack of a vaccine rollout plan, saying he was upset about "not having all the facts."

"What I was upset with was not having all the facts that were available to the last outfit that we did not know," Biden said. "So, we were under the distinct impression there were significantly more vaccines available to begin to be distributed, that it was a distribution problem. Which it is and was, but that wasn't the main problem. It was having enough."

On top of that, he said, there were issues related to the vaccines' transport, obtaining paraphernalia associated with vaccinations, having a sufficient number of people injecting the vaccine and getting the vaccines to locations easily accessible to the public.