Biden keeps August 31 deadline to withdraw from Afghanistan: 'The sooner we finish the better' 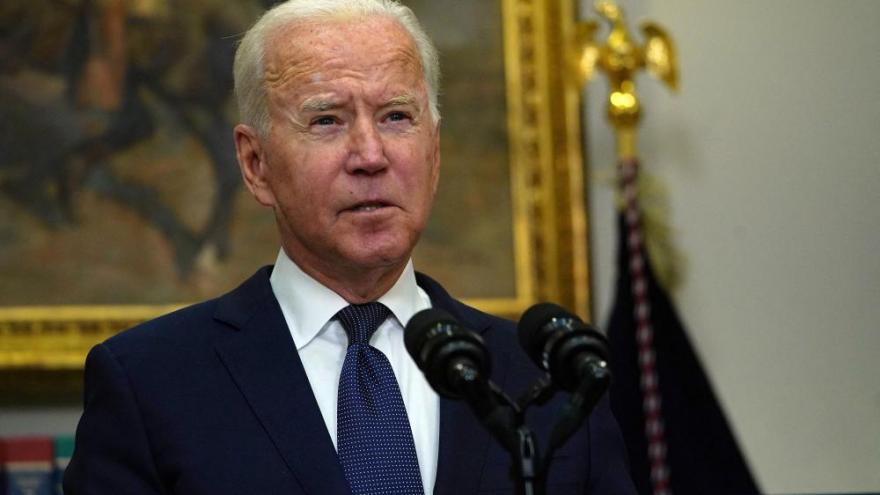 Group of 7 leaders will discuss on Tuesday whether or when they should jointly recognize the Taliban as Afghanistan's government.

(CNN) -- President Joe Biden said Tuesday the US is on track to complete its hurried airlift in Afghanistan by August 31, acknowledging he does not plan to keep American troops in the country any longer even as questions remain over who will be able to leave and when.

In late afternoon remarks at the White House, Biden recognized the success of the mission will depend largely on cooperation from the Taliban. He said he's asked military leaders to be ready with contingency options to "adjust that timetable" if it becomes necessary.

"We are currently on a pace to finish by August 31. I am determined to complete our mission," Biden said in a speech that was delayed by hours.

Still, he said meeting that deadline "depends on the Taliban continuing to cooperate and allow access to the airport to those who are transporting out and no disruptions to our operation."

"The sooner we finish the better," Biden said. "Each day of operations brings added risk to our troops."

Earlier in the day, Biden relayed his decision on sticking to the end-of-month deadline in crisis talks with the Group of 7, making clear the decision was in large part driven by persistent security risks.

"It is a tenuous situation," he said in his remarks, describing an "acute" risk of attack from the ISIS affiliate operating in Afghanistan.

Biden's foreign counterparts had entered the morning G7 meeting prepared to apply pressure on Biden to extend the deadline, arguing more time is needed to evacuate their citizens and at-risk Afghans who assisted in the war effort. But aware of the risks that will confront American troops in September, Biden made clear he wants the airlift finished by the end of the month.

While the Pentagon has voiced confidence it can evacuate all remaining Americans in the country by next week, it's less clear it will be able to assist the thousands of Afghans who assisted the war effort and are still awaiting their turn to leave.

Many Afghan allies who the US has aimed to help will be left behind, a senior administration official told CNN, adding, "That would be true whenever we evacuated and whenever the Taliban took over."

The official said the 70,000 people evacuated in the last 10 days does not closely match the universe of Afghan allies potentially eligible to come to the US, which Biden has previously estimated at 50,000 to 65,000. Many of the 70,000 evacuated have included different groups of Afghan allies given priority by the US' European partners. In addition, some of those evacuated have not even applied for Special Immigrant Visa status yet, though they will in Qatar or Kuwait.

The official declined to estimate the number of Americans still in Afghanistan, deferring to Secretary of State Antony Blinken, who will speak on Wednesday, but said the number on August 14 was "probably lower than most people believe" because "a lot left in the final few weeks."

The crisis talks of the G7 came as the Afghanistan evacuation effort picks up steam, now far exceeding the administration's initial daily goals. Biden said on Tuesday that in the past 12 hours, 12,000 people had been evacuated from Kabul: 6,400 on 19 separate US military flights and 5,600 on 31 different coalition flights.

The Pentagon said the military has increased the pace of flights out of Kabul to one every 45 minutes.

In total, the White House says US efforts have facilitated the evacuation of approximately 70,700 people since August 14, Biden said. Approximately 1,000 Afghans have arrived at Dulles International Airport outside Washington, DC, in the last 24 hours, according to the Pentagon.

The massive logistical undertaking by the American military -- which took control of part of Kabul's international airport, including its air traffic control, in the aftermath of the Taliban takeover -- has allowed other countries to evacuate their citizens. If the US withdraws, its unclear whether civilians from any country would still be able to leave.

European allies of the United States stressed during the talks that they wanted to ensure any possibility of a deadline extension was considered by the US, according to a person familiar with the call.

While advocating for leaving at the end of the month, Biden said the risk of an attack is "very high," an administration official said.

Despite the massively scaled-up flights, some of Biden's advisers have worried about US troops' safety and the potential for ISIS or Taliban reprisals should they stay any longer than August 31. Representatives for the Taliban have called the deadline firm, and said American troops remaining past the date would amount to a "clear violation" of their agreement with the United States.

The Taliban has made clear that "our leadership will take proper and necessary decision(s)" should the US stay past August 31, spokesman Sohail Shaheen said Monday.

"August 31 is deadline announced by them," the Taliban spokesman said. "US must adhere to removing troops from Afghanistan by this date. Otherwise, it will be a clear violation."

The administration has remained in daily discussion with the Taliban on security matters, including the end-of-month deadline. The CIA director, Bill Burns, traveled to Afghanistan this week to meet with Taliban leader Abdul Ghani Baradar, according to senior administration officials, who said the US is seeking a clearer understanding of where the Taliban stands on several issues as the clock ticks towards the deadline.

Burns, a seasoned career diplomat, is the highest-ranking US official to meet in person with Taliban leadership since Afghanistan's civilian government collapsed on August 15.

Ahead of Tuesday's G7, some on the President's national security team warned against an extension, pointing to the rapidly sped-up flights out of the country.

Any extension would have been likely be very brief and focused only on evacuating Americans, according to one official familiar with the matter, who said all contingencies were under discussion.

G7 nations pressure US to stay past August 31

The emergency meeting of the G7 was called this week to respond to the chaotic events in Kabul, where tens of thousands of foreign nationals and Afghan citizens who assisted in the war effort are desperately trying to leave.

Britain and France in particular were pressing Biden to leave troops in country for an extra few days, arguing it would still allow him to meet his original 9/11 withdrawal date for US forces.

Even some US Democrats agree; House Intelligence Chairman Adam Schiff emerged from a classified briefing with intelligence officials on Monday pessimistic the Biden administration will be able to meet its goal of evacuating all Americans and its allies from Afghanistan by August 31, saying that was "very unlikely."

"It's hard for me to imagine all of that can be accomplished between now and the end of the month," Schiff said, adding he was worried about the terror threat to the airport.

There was another all-member House briefing on Afghanistan scheduled for Tuesday morning. Top members of Biden's national security team, including the secretaries of State and Defense, all briefed lawmakers.

Emerging afterward, lawmakers from both parties said they pressed the officials to extend the August 31 deadline.

"There was strong, bipartisan support to extend the August 31 deadline," said Rep. Elissa Slotkin, a Michigan Democrat. "That was a major theme, a major comment a major point we all tried to make, urging them to do more to advocate with the President to extend the deadline."

G7 members also planned on Tuesday to discuss whether or when they should jointly recognize the Taliban as Afghanistan's government, western officials familiar with the planning told CNN. Any decision on whether to recognize the Taliban would come with enormous consequence that could be used as leverage to compel the group to respect human rights, the officials said.

British Prime Minister Boris Johnson, who hosted the meeting as the current G7 president, is advocating for a unified approach to the Taliban, according to western officials. He wants the world's leading democracies to come up with a plan on how to recognize the government or potentially apply economic sanctions or withhold aid.

So far no governments have recognized the Taliban as the official government of Afghanistan. Doing so could allow the country access to previously committed foreign aid.