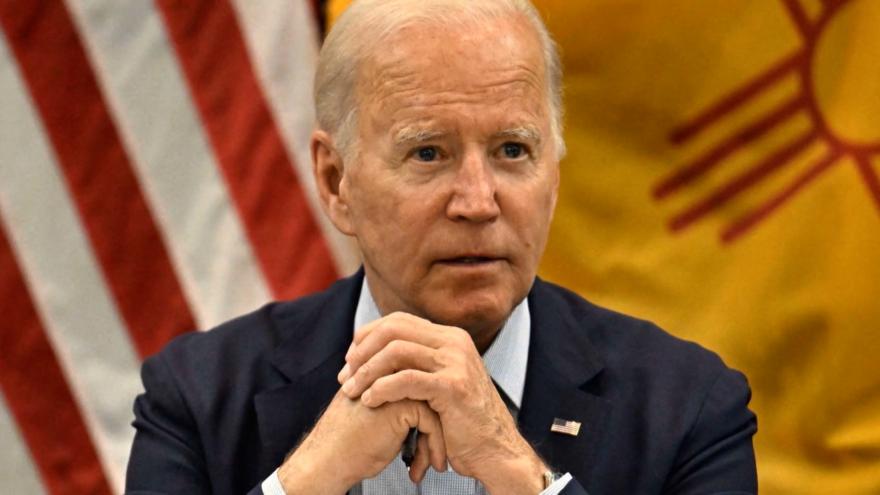 (CNN) -- President Joe Biden on Thursday signed the Ocean Shipping Reform Act into law, celebrating a bipartisan win aimed at boosting the supply chain amid sky-high inflation and fears of a recession.

The President also attacked "foreign owned" shipping companies, saying, "They raked in the profits and the costs got passed on, as you might guess, directly to consumers, sticking it to American families and businesses because they could -- furniture, appliances, clothing, anything and everything across the Pacific on a ship from Asia -- saw a price tag shoot up, and families and businesses felt the squeeze here at home."

The new law is aimed at improving oversight for ocean shipping and makes changes that proponents say will ease inflation and lessen export backlogs. The White House has said the act will help lower costs for American retailers, farmers and consumers.

A Thursday ceremony at the White House to sign the bill into law took place amid a number of recent economic concerns facing the nation.

At a consumer level, supply issues remain regarding consumers' access to key products like infant formula and tampons.

The average national cost of a gallon of regular gas hit $5 for the first time ever. Last Friday's Consumer Price Index report showed inflation is rising faster than expected, adding to the concern that propelled the Federal Reserve to issue its largest interest rate hike in 22 years. On Thursday, mortgage rates surged by more than half a percentage point -- the largest one-week increase since 1987. And ahead of the rate hike this week, the S&P 500 on Tuesday wiped out all of its gains since Biden was inaugurated early last year.

At Thursday's ceremony, Biden reiterated that tackling inflation remains his "number one priority," saying he believes the legislation will bring down inflation "at least marginally."

And despite comments from his staff and advisers in recent weeks rebuffing inflation concerns by suggesting that high inflation or gasoline prices remain worse in other parts of the world, the President remarked that "it's no solace that inflation is higher around the rest of the world, and gas prices are higher everywhere else in the world. Doesn't matter. It's much too high here."

Still, Biden and the White House have broadly blamed factors outside of their control for the state of the economy, such as oil giants banking high profits and the Covid-19 pandemic, as well as Russian President Vladimir Putin's war in Ukraine and its effect on everything from the global oil supply to fertilizer to grains.

During his State of the Union address in March, the President criticized the "exploitation" ocean carriers are carrying out by passing on high prices to consumers. And ahead of the signing ceremony, a White House official discussed how rising ocean shipping costs "are a major contributing factor to increased costs for American families."

"During the pandemic, ocean carriers increased their prices by as much as 1,000%. And, too often, these ocean carriers are refusing to take American exports back to Asia, leaving with empty containers instead. That's costing farmers and ranchers -- and our economy -- a lot of money," the official added.