Biden condemns Trump for 'inciting a mob' to storm the Capitol 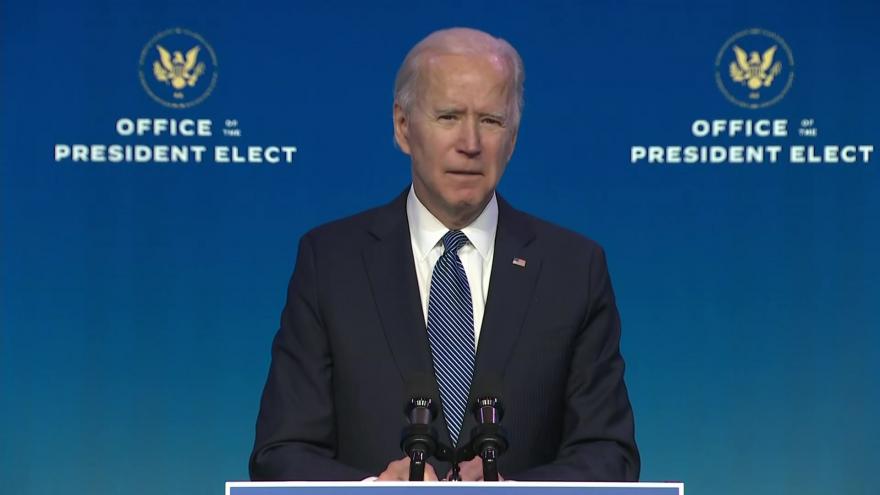 Biden said he'd received a text message Wednesday from his 21-year-old granddaughter Finnegan Biden pointing out how much more aggressive police had been with Black Lives Matter protesters.

"No one can tell me that if it had been a group of Black Lives Matter protesting yesterday, they wouldn't have been treated very, very differently from the mob of thugs that stormed the Capitol. We all know that's true, and it's unacceptable. Totally unacceptable," Biden said in Wilmington, Delaware. "The American people saw it in plain view."

Earlier this year, US Park Police and National Guard troops at one point used gas to disperse a crowd of peaceful protesters outside the White House so that Trump could walk across Lafayette Park to visit a church that had been damaged by rioters. Scenes of police brutalizing protesters in cities across the nation emerged in May and June following the police killing of George Floyd.

However, following a pro-Trump mob converging on the US Capitol Wednesday, videos have emerged showing some Capitol Police officers getting out of their way, or taking selfies with them. Other police officers tried to hold protesters back. One protester was shot and killed by police.

"We witnessed two systems of justice when we saw one that let extremists storm the US Capitol and another that released tear gas on peaceful protesters last summer," Vice President-elect Kamala Harris said Thursday. "We know this is unacceptable. We know we should be better than this."

Four people are dead after Trump urged his supporters to fight against the ceremonial counting of the electoral votes in Congress, repeating lies about the election being stolen from him and promising to join them.

Biden's Thursday comments came as he introduced the group he has chosen to helm the Justice Department. He admonished Trump's actions Wednesday, when at Trump's behest a mob stormed the Capitol. He said Trump is directly responsible for "one of the darkest days in the history of our nation," a day after Trump-supporting rioters stormed the US Capitol.

"They were a riotous mob -- insurrectionists. Domestic terrorists. It's that basic. It's that simple," Biden said in Wilmington, Delaware, as he began a speech in which he planned to introduce federal appeals court Judge Merrick Garland as his nominee for attorney general.

"And I wish we could say we couldn't see it coming, but that isn't true. We could see it coming," Biden said. "The last four years we've had a president who's made his contempt for our democracy, our Constitution, the rule of law, clear in everything he has done. He unleashed an all-out assault on the institutions of our democracy from the outset, and yesterday was but a culmination ... of that attack."

"Trying to use a mob to silence the voices of nearly 160 million Americans who summoned the courage in the face of a pandemic that threatened their health and their lives to cast that sacred ballot," Biden said of Trump's actions, referring to the number of Americans who voted in the 2020 presidential election.

On Thursday, Biden strained to make clear that -- unlike Trump, who has leaned on his attorneys general to end investigations into his actions and launch probes into his political rivals -- Biden is seeking a Justice Department that will act independently of the President.

"You won't work for me. You are not the president or the vice president's lawyer. Your loyalty is not to me. It's to the law. The Constitution," Biden said.

Garland, too, referred to Wednesday's attempted coup by Trump supporters in explaining his decision to depart a lifetime appointment as a federal judge.

"To serve as attorney general at this critical time ... is a calling I am honored and eager to answer," Garland said. "As everyone who watched yesterday's events in Washington now understands -- if they did not understand before -- the rule of law is not just some lawyer's turn of phrase. It is the very foundation of our democracy."

"The essence of the rule of law its that like cases are treated alike; that there not be one rule for Democrats and another for Republicans; one rule for friends and another for foes ... or different rules depending upon one's race or ethnicity. And the essence of its great corollary, equal justice under law, is that all citizens are protected in their exercise of their civil rights," he said.

Garland pointed to Biden's comments that the attorney general would have the "independent capacity" to determine who is and is not prosecuted.

"I would not have agreed to be considered for attorney general under any other conditions," Garland said.

To serve under Garland at the Justice Department, Biden has chosen Lisa Monaco, who served as assistant attorney general for national security in the Obama administration, as his nominee for deputy attorney general.

"Our first-rate nominees to lead the Justice Department are eminently qualified, embody character and judgment that is beyond reproach, and have devoted their careers to serving the American people with honor and integrity," Biden said in a statement.

The President-elect continued, "They will restore the independence of the Department so it serves the interests of the people not a presidency, rebuild public trust in the rule of law, and work tirelessly to ensure a more fair and equitable justice system."

Garland's selection for attorney general comes shortly after Georgia elected Democrats Jon Ossoff and Rev. Raphael Warnock to the Senate, flipping control of the chamber to the Democratic Party.

Garland, whose nomination to the Supreme Court in 2016 by President Barack Obama was ignored by Senate Republicans, was seen as a top contender for the position, but concerns about the vacancy his selection would create on the US Court of Appeals for the District of Columbia had raised alarm bells among Biden and many advisers who believed Senate Republicans would block any nomination to that seat. Democrats winning the Senate allayed those concerns.

Biden was planning to deliver a speech on the economy Wednesday afternoon, but scrapped his speech and instead addressed the chaos and violence in Washington. He said the rioting by Trump supporters at the US Capitol amounted to an "unprecedented assault" on US democracy.

"This is not dissent, it's disorder. It's chaos," Biden said. "It borders on sedition, and it must end now."