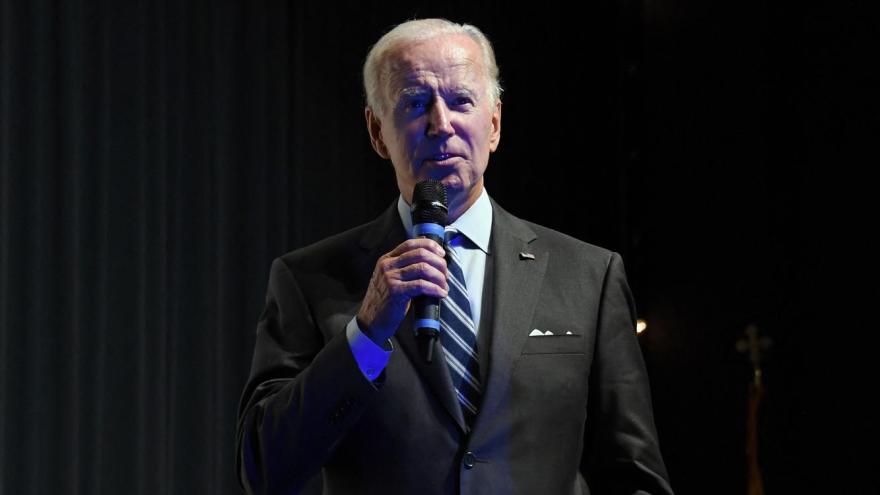 President Joe Biden is set to travel to Pennsylvania on August 30 to speak about his plan to bolster police forces across the nation and reduce gun crime, which includes hiring and training 100,000 police officers over the next five years.

(CNN) -- President Joe Biden on Tuesday delivered a forceful speech in the key battleground state of Pennsylvania that demonstrated his escalated rhetoric against "MAGA Republicans" in Congress months before the midterm elections.

During another amped up speech, Biden delivered a strong defense of the FBI amid increased threats following the agency's search of former President Donald Trump's Mar-a-Lago residence.

"It's sickening to see the new attacks on the FBI, threatening the lives of law enforcement agents and their families for simply carrying out the law and doing their job," Biden told a crowd in Wilkes-Barre.

The FBI has seen heightened threats against bureau personnel and property in the wake of the Mar-a-Lago search, including some against agents listed in court records as being involved in executing the search warrant. Several Republicans in recent weeks have issued calls to "defund the FBI," signaling Trump's grip on the party.

The President also offered scathing criticism of Republicans in Congress who are aligned with Trump and refuse to condemn the violent January 6, 2021, attack on the US Capitol.

"Let me say this to my MAGA Republican friends in Congress: Don't tell me you support law enforcement if you won't condemn what happened on (January 6). Don't tell me. Can't do it. For God's sake, whose side are you on?" Biden said.

The President said, "You can't be pro-law enforcement and pro-insurrection. You can't be a party of law and order and call the people who attacked the police on January 6 patriots. You can't do it."

Biden criticized comments made over the weekend by Republican Sen. Lindsey Graham of South Carolina, who said in an interview with Fox there would be "riots in the streets" if Trump were to be prosecuted.

"The idea you turn on a television and see senior senators and congressmen saying, 'If such and such happens, there'll be blood in the street?' Where the hell are we?" Biden said.

Tuesday's remarks built on Biden's unofficial midterm campaign kickoff that took place last week, in which he offered one of his sharpest rebukes of MAGA Republicans and told a group of Democratic donors that the "entire philosophy that underpins" the Make America Great Again agenda is "semi-fascism."

Biden was in Pennsylvania to promote his proposal to bolster police forces across the nation and reduce crime, which includes hiring and training 100,000 police officers over the next five years.

Biden said, "I'm tired of not giving the kind of help they need. Folks, look, we're in a situation in this country where we have to give them additional resources they need to get their job done."

The President dedicated a significant portion of his speech to calling for a federal ban on assault weapons.

He spoke of his trip to Uvalde, Texas, after a mass shooting at an elementary school left 19 children and two teachers dead, and he said parents had to provide DNA to identify their children, "because the AR-15 just rips the body apart."

The President was initially scheduled to unveil his "Safer America Plan" last month in Pennsylvania but his trip was postponed after he tested positive for Covid-19 the morning he was slated to fly to Wilkes-Barre, Pennsylvania.

The plan asks Congress to appropriate more than $10 billion in funding over five years for the COPS Hiring Program in order to help fund the hiring and training of the additional police officers.

The President has repeatedly rejected calls from some Democrats and activists to "defund the police" and cut budgets to police departments and reallocate funding to social services to respond to non-violent crimes. The movement grew to national prominence following the police killing of George Floyd in Minneapolis in 2020.

The President's Tuesday visit to Pennsylvania was the first of three appearances in the key battleground state over the next week. Biden is slated to deliver a primetime address in Philadelphia on Thursday and scheduled to travel to Pittsburgh on Labor Day.