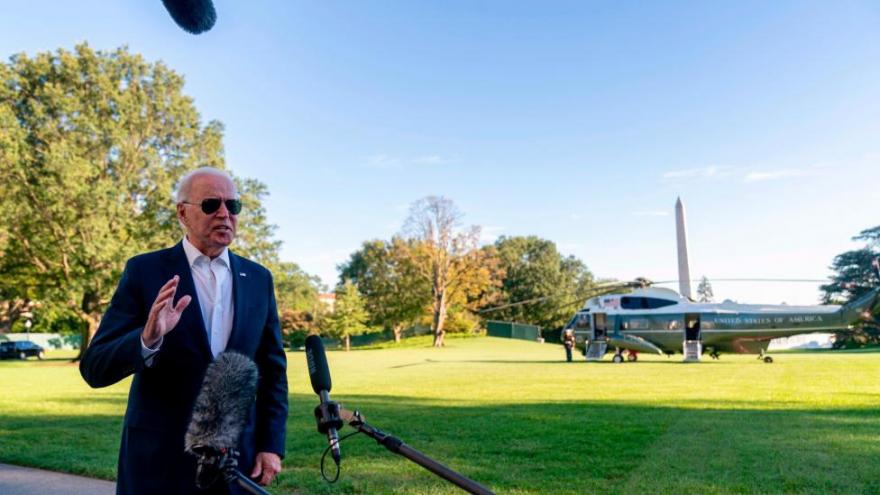 President Biden speaks to members of the media as he arrives at the White House in Washington, on Sept. 26 after returning from a weekend at Camp David.

(CNN) -- President Joe Biden is canceling plans to travel to Chicago on Wednesday in order to continue leading crucial negotiations in Washington over his legislative agenda, a White House official told CNN.

Biden scrapped his travel plans following meetings Tuesday with Democratic Sens. Joe Manchin of West Virginia and Kyrsten Sinema of Arizona aimed at bridging the gap between the moderate senators and progressive lawmakers over the $3.5 trillion budget reconciliation legislation and the fate of the $1.2 trillion bipartisan infrastructure deal.

"In meetings and calls over the weekend and through today, President Biden has been engaging with members of Congress on the path forward for the Build Back Better Act and the Bipartisan Infrastructure Deal. He will now remain at the White House tomorrow to continue working on advancing these two pieces of legislation to create jobs, grow the economy, and make investments in families, rather than failed giveaways to the rich and big corporations," a White House official said.

The decision to stay in Washington is a sign of how critical the next two days will be in determining the fate of the centerpieces of Biden's legislative agenda and the central role the President is playing in stewarding those negotiations.

Key progressive legislators in the House warned Tuesday they will vote against the infrastructure bill when it comes up for a vote in the House on Thursday barring an agreement on budget reconciliation, the $3.5 trillion package that Manchin and Sinema have said is too costly.

"There is a strong feeling that progress is being made," a source familiar with the discussions said. "Our big gun is staying here."

Biden stayed behind closed doors on Tuesday in meetings with Manchin and Sinema, while also speaking on the phone with progressive lawmakers, House Speaker Nancy Pelosi and Senate Majority Leader Chuck Schumer.

"You know me. I'm a born optimist," Biden said Monday about the prospects of a deal between the warring factions of his party. "I think things are going to go well. I think we're going to get it done, and -- but I have meetings tonight, tomorrow, and for the next little bit, so..."

Biden was scheduled to travel to Chicago on Wednesday to highlight the effectiveness of Covid-19 vaccine requirements. A White House official said the trip would be rescheduled.

"There will be more to come on his engagement over the next couple of days, and the trip to Chicago to discuss the ongoing importance of getting people vaccinated will be rescheduled," the White House official said.