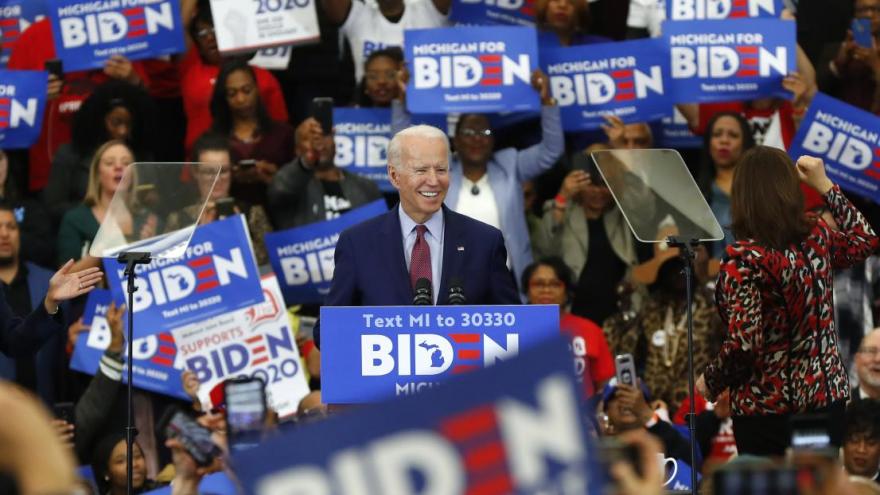 The new program, called League 46, consists of three teams: Students for Biden, Young Professionals for Biden and Young Elected Officials for Biden. It will be led by Symone Sanders, a senior adviser for the campaign.

"We are thrilled to launch League 46 and create a robust network of students, professionals, and elected officials that will mobilize young people across the country and ensure we work together to make Donald Trump a one-term president," Sanders said in a statement Tuesday.

"This is the most consequential election of our lifetimes and Joe Biden knows that young Americans will be a powerful part of the coalition we are building to win in November, and that their ideas, resolve, and energy will be a driving force of the movement to defeat Donald Trump."

According to the release, League 46 is designed to bring together young Americans of "every race, ethnicity, religion, gender, sexual orientation, ability, economic background, and geographic area" to build "armies" of supporters across the nation.

The initiative comes after a recent CNN analysis indicated that Biden seems to be underperforming 2016 Democratic nominee Hillary Clinton with this particular bloc of voters.

According to CNN's Harry Enten, based on an average of five leading polls in the nation, Biden leads Trump by 14 points on average among them. That is about 10 points worse than Clinton did, even as Biden is leading Trump by a wider margin (6 points overall) than Clinton was in the closing days of the 2016 campaign.

On the virtual campaign trail, Biden has spoken at length about the economic hardships facing young Americans in the wake of the public health crisis.

"We must not allow this pandemic to rob young people of the futures or economic opportunities that they've been working so hard to build," he warned as early as March during a virtual "happy hour" roundtable discussion for young voters.

The former vice president has promised to adopt a number of policies appealing to young voters, including a student debt relief plan that borrows from his more progressive former primary opponents, Sens. Bernie Sanders of Vermont and Elizabeth Warren of Massachusetts.

Biden recently spoke about the issue with soccer star Megan Rapinoe on Instagram Live, reiterating his plan to make two-year community college free and suggesting that a Covid-19 stimulus package should cancel a minimum of $10,000 of student loan debt for those dealing with the pandemic.

"And I think people are now ready. I think they're ready like they weren't two, three, five years ago, and I think Bernie and Elizabeth and others deserve a lot of credit for that," he said in late April.