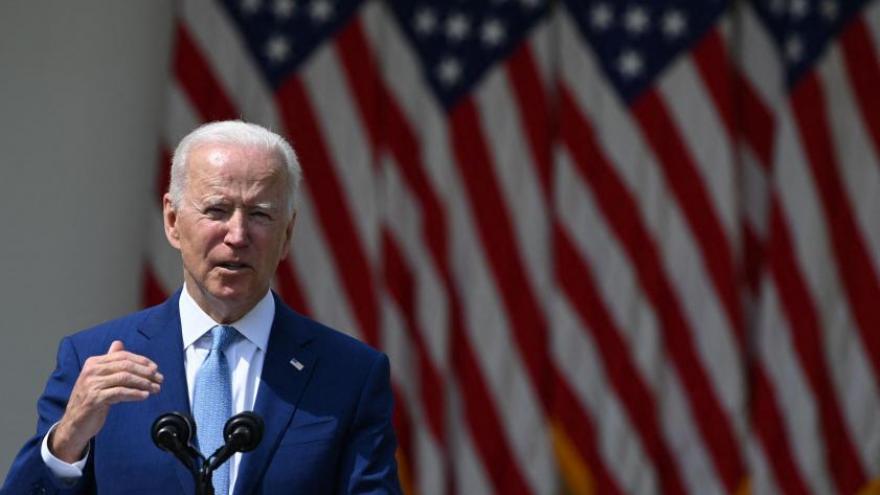 President Joe Biden on Monday called for "peace and calm" in the wake of Daunte Wright's fatal encounter with police in Minnesota. Biden is shown speaking about gun violence prevention in the Rose Garden of the White House in Washington, DC, on April 8, 2021.

(CNN) -- President Joe Biden on Monday called for "peace and calm" in the wake of Daunte Wright's fatal encounter with police in Minnesota, saying his death does not justify violence or looting.

Wright, a 20-year-old Black man, was fatally shot Sunday afternoon by police during a traffic stop in the Minneapolis suburb of Brooklyn Center.

The President said that he's been briefed on the situation and is awaiting a full investigation into the matter before weighing in on the officer's intentions. He added that he has seen the body camera footage of Wright's traffic stop.

"It's really a tragic thing that happened, but I think we've got to wait and see what the investigation shows -- the entire investigation. You've all watched, I assume -- as I did, the film, which is really the body cam, which is fairly graphic. Question is -- was it an accident? Was it intentional? That remains to be determined by a full-blown investigation."

Biden said he has spoken with authorities in Minnesota about the incident, as well as Democratic Minnesota Gov. Tim Walz and Brooklyn Center Mayor Mike Elliott. The President said he has not called Wright's family.

RELATED: The latest on the police shooting in Brooklyn Center, Minnesota

The President urged against looting and violence in the wake of Wright's death.

"But in the meantime, I want to make it clear again, there is absolutely no justification -- none -- for looting. No justification for violence. Peaceful protest -- understandable. And the fact is that, you know, we do know that the anger, pain and trauma that exists in the Black community in that environment is real. It's serious and it's consequential. But it will not justify violence and/or looting," Biden said.

Biden reiterated that his thoughts are with Wright's family in a tweet later Monday, stressing the need to address the "pain, anger, and trauma that Black America experiences every day."

"While we await a full investigation, we know what we need to do to move forward: rebuild trust and ensure accountability so no one is above the law," he said.

That message was echoed by Vice President Kamala Harris, who tweeted Monday evening, "Prayers are not enough."

"Daunte Wright should still be with us. While an investigation is underway, our nation needs justice and healing, and Daunte's family needs to know why their child is dead -- they deserve answers," she said.

Police have said they tried to take Wright, the driver, into custody after learning during a traffic stop that he had an outstanding warrant. He got back into his vehicle, and an officer shot him, police said. They also said the man drove several blocks before striking another vehicle.

An officer's body camera footage released on Monday indicated that Wright got out of his car, but then got back in. It's not clear why, but Brooklyn Center Police Chief Tim Gannon told reporters it appeared from the video that Wright was trying to leave the scene. Gannon also said that the video appeared to show an officer had shouted "Taser!" but fired her handgun instead.

The deadly encounter in the Minneapolis suburb took place about 10 miles from where former Minneapolis police Officer Derek Chauvin is on trial for the killing of another Black man, George Floyd.

"There will not be a lack of help and support from the federal government if the local authorities believe it's needed," he said.

Earlier Monday, the Biden administration indicated that it is standing down on a campaign promise to create a White House-led commission on police oversight, choosing instead to work through legislative channels to pursue policing reforms.

"Based on close, respectful consultation with partners in the civil rights community, the administration made the considered judgment that a police commission, at this time, would not be the most effective way to deliver on our top priority in this area, which is to sign the George Floyd Justice in Policing Act into law," Domestic Policy Council Director Susan Rice said in a statement.