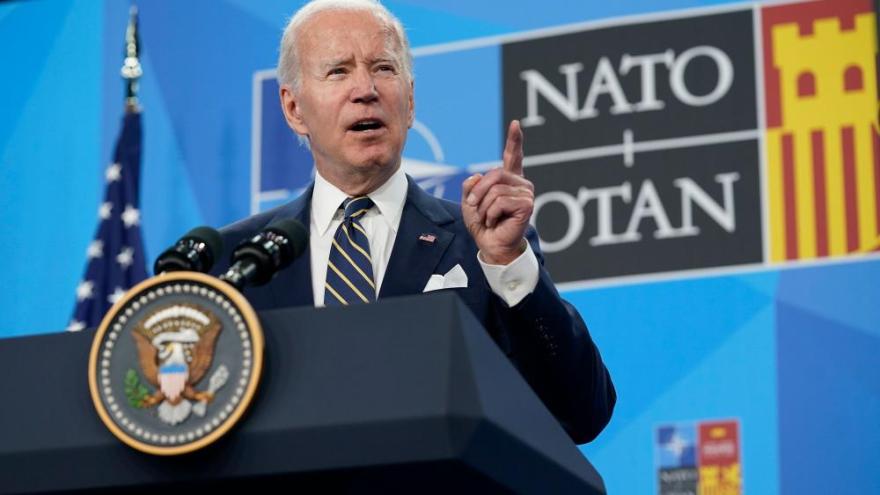 US President Joe Biden said on June 30 that he would support making an exception to the filibuster in order to codify abortion rights and the right to privacy through legislation passed by Congress.

(CNN) -- President Joe Biden said on Thursday that he would support making an exception to the filibuster -- the 60-vote threshold in the Senate needed to pass most legislation -- in order to codify abortion rights and the right to privacy through legislation passed by Congress.

However, despite Biden's newly announced support for the filibuster carveout, his best bet in doing so would be next year -- and only if Democrats gain at least two Senate seats and hold the House of Representatives, an extremely tall task.

Asked about what executive action he would use to strengthen abortion rights following the Supreme Court's decision to overturn Roe v. Wade last week, Biden said during a news conference in Madrid, "The most important thing ... we have to change -- I believe we have to codify Roe v. Wade in the law."

The President then clarified that he was also open to changing filibuster rules for the "right to privacy, not just abortion rights."

It's a stark call from a President who has so far been loath to push for any changes to Senate rules despite calls from progressives to do away with the filibuster in order to pass his agenda. Biden had told CNN's Anderson Cooper at a town hall last year that he would be open to altering the filibuster to pass voting rights legislation "and maybe more." His comments on Thursday mark the first time he's expressed total willingness to eliminate the filibuster specifically for abortion rights.

The Senate doesn't have the 60 votes needed to codify Roe v. Wade under current rules.

Key moderate Democratic Sens. Joe Manchin of West Virginia and Kyrsten Sinema of Arizona have expressed opposition to changing filibuster rules. And though Manchin is open to codifying Roe v. Wade legislatively, both senators oppose gutting the filibuster, their offices reiterated on Thursday.

Sinema's office pointed to a Washington Post op-ed the senator wrote last year in which she argued that the filibuster has been used to protect abortion rights and block things like 20-week abortion bans.

So, without the support of Manchin or Sinema, Democrats would need to sweep in the November elections -- when their party is facing the bleakest midterm environment in a dozen years -- in order to approve abortion rights legislation.

Democratic senators who were in Madrid as part of a congressional delegation attending the NATO summit were pessimistic, pointing to Manchin's and Sinema's outsized roles in changing the rules.

Illinois Sen. Dick Durbin, the second-highest ranking Democrat in the Senate, told reporters in Madrid that in a 50-50 Senate, "the notion of changing the rules is really at the mercy of one or two senators who can make that decision for us."

He added that "this is not the political environment to be looking" for "massive institutional change."

"I voted to end (the filibuster)," said Sen. Jeanne Shaheen, a New Hampshire Democrat. "It didn't pass, so we may take it up again, and we may not."

Despite flagging poll numbers and poor prospects in holding onto the Democratic majority in the House, the White House sees a path to gaining Senate seats to increase their narrow majority.

Holding their current seats and adding at least two new Democratic senators could, in theory, create the pathway to securing the votes for a Senate rules change.

Biden's call dovetails with the White House's efforts to ramp up the urgency in advance of the midterm elections -- and it comes as national Democrats have increasingly raised concerns that the Biden administration is not doing enough to address and fight the Supreme Court decision.

Biden, speaking after a series of summits with world leaders in Europe, broadly disputed characterizations that America is going backward. But he conceded that the Supreme Court's roll back on abortion rights and the right to privacy has been "destabilizing."

"We've been a leader in the world in terms of personal rights and privacy rights. And it is a mistake, in my view, for the Supreme Court to do what it did," he said.

Those comments drew the ire of Senate Minority Leader Mitch McConnell, who later called the President's comments about the court "unmerited and dangerous."

"Attacking a core American institution like the Supreme Court from the world stage is below the dignity of the President," McConnell, the leading Republican in the Senate, said in a statement. "Beyond that, President Biden's attacks on the Court are unmerited and dangerous. He's upset that the Court said the people, through their elected representatives, will have a say on abortion policy. That does not destabilize democracy -- it affirms it. By contrast, it is behavior like the President's that undermines equal justice and the rule of law."

'I'm the only president they got'

During Thursday's news conference, Biden also defended his ability to effectively convey Democrats' message on abortion. Despite his complicated history on the issue, he told progressive members of his party they had little choice in the matter.

"I'm the only president they got," he said.

Some Democrats have been critical of Biden for not speaking out louder on protecting abortion rights. Since the Supreme Court overturned Roe v. Wade, some have complained he isn't willing to go far enough in protecting access to abortions.

But Biden said he was the one in the White House.

"I'm the President of the United States of America," he said. "That makes me the best messenger."

He called the abortion ruling "a serious, serious problem that the court has thrust upon the United States," linking the decision to other potential issues like marriage rights.

"I'm feel extremely strongly that I'm gonna do everything in my power, which I legally can do in terms of executive orders," he said.

During Thursday's news conference, the President said he would be meeting with governors on Friday to discuss abortion issues and would have "announcements to make then."

Biden will meet virtually with the attendees, who include Democratic Govs. Ned Lamont of Connecticut, Kathy Hochul of New York, Michelle Lujan Grisham of New Mexico, J.B. Pritzker of Illinois, Gavin Newsom of California, Kate Brown of Oregon and Jay Inslee of Washington, per a White House official. The President will join from the White House.

This story has been updated with more from Thursday's news conference.