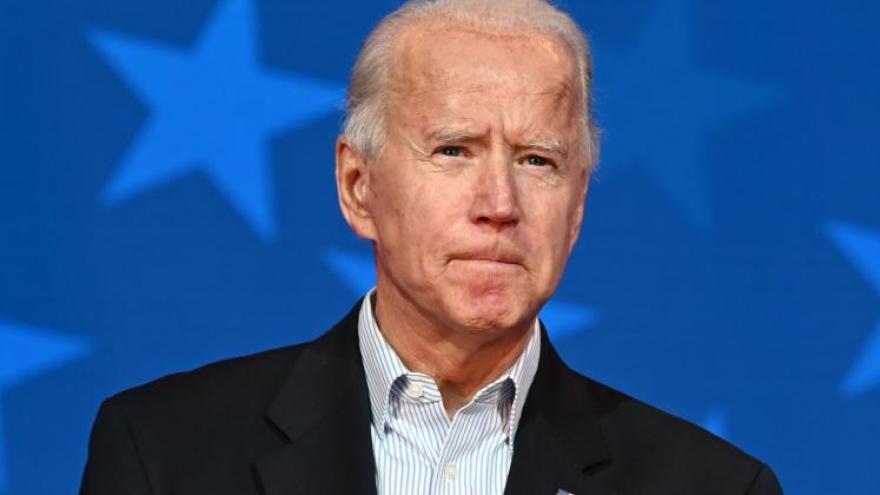 Democratic Presidential candidate Joe Biden looks on while speaking at the Queen venue in Wilmington, Delaware, on November 5, 2020.

(CNN) -- President-elect Joe Biden is building out the staff that will surround him in the White House, announcing Tuesday that he is tapping two long-time advisers for top roles and naming several other veterans of his presidential campaign to senior positions.

Among Tuesday's announced hires: Mike Donilon, the chief strategist for Biden's campaign who played a leading role in crafting his speeches and advertising as he framed the 2020 race as a "battle for the soul of the nation," will be a senior adviser to the president. And Steve Ricchetti, the Biden campaign chairman and a veteran of the Barack Obama and Bill Clinton White Houses, will be a counselor to the president.

The announcements come days after Biden tapped veteran Democratic operative Ron Klain as his chief of staff, and show that Biden is first filling out the staff that will surround him in the White House before moving on to Cabinet announcements.

News of at least two of the appointments had already broken Monday: Jen O'Malley Dillon, the campaign manager who took over after Biden limped through the Democratic primary and turned his campaign into the biggest fundraising juggernaut in history, is Biden's deputy chief of staff.

And Louisiana Rep. Cedric Richmond, the former chairman of the Congressional Black Caucus, is resigning from his House seat to become a senior adviser to Biden and the director of the White House Office of Public Engagement.

Julie Chavez Rodriguez, a Biden deputy campaign manager who had previously been a top aide to Vice President-elect Kamala Harris' presidential campaign during the primary, will be director of the White House Office of Intergovernmental Affairs. Chavez Rodriguez is also a veteran of former President Barack Obama's administration, where she was a special assistant to the president and senior deputy director of public engagement.

Annie Tomasini, who was Biden's traveling chief of staff during the campaign, will be director of Oval Office Operations, a gatekeeping role that again puts her close to the President-elect.

"President-elect Biden and Vice President-elect Harris have an ambitious and urgent agenda for action. The team we have already started to assemble will enable us to meet the challenges facing our country on day one," Klain said in a statement announcing the hires Tuesday morning.

Biden's transition team announced several of Jill Biden's top staffers, as well. Julissa Reynoso Pantaleon, a former US ambassador to Uruguay and deputy assistant secretary of state who is now a partner at the law firm of Winston & Strawn, will be Biden's chief of staff. Anthony Bernal, who was the soon-to-be first lady's chief of staff during the 2020 campaign, will be a senior adviser.

For long stretches of the 2020 campaign, Tomasini and Bernal were the only Biden aides regularly meeting with the candidate and his wife. Biden largely campaigned from home for months, with states locked down and travel restricted during the coronavirus pandemic, as campaign staffers worked remotely. Tomasini and Bernal were the only staffers regularly entering and leaving their home in Delaware.