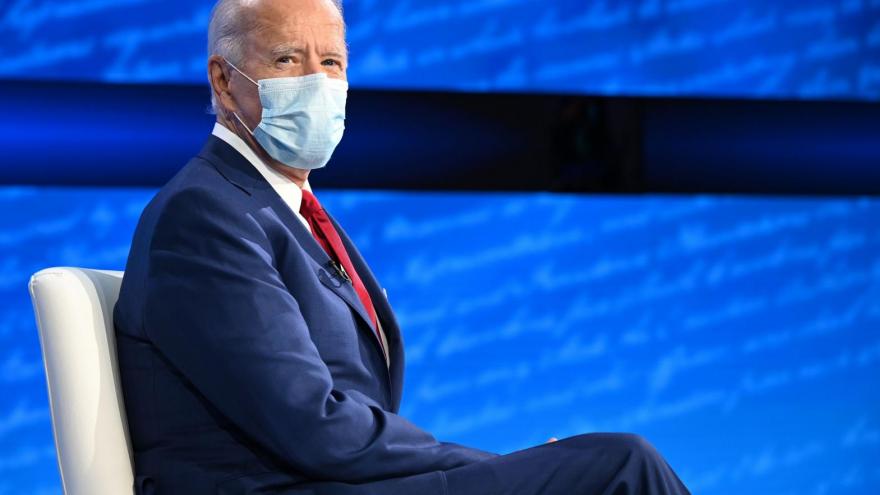 Describing the alleged plot, Biden said, "It's the sort of behavior you might expect from ISIS and it should shock the conscience of every American. Every American."

Biden's comments, as he campaigned in Michigan on Friday alongside Whitmer and Democratic Sen. Gary Peters, who is facing a competitive reelection, came the week after the FBI revealed it had uncovered an extremist group's plot to kidnap Whitmer at the state Capitol. The alleged scheme included plans to overthrow several state governments that the suspects "believe are violating the US Constitution," including the government of Michigan and Whitmer, according to a federal criminal complaint.

Biden also condemned Trump for his response to White supremacists rallying in Charlottesville, Virginia, in 2017 -- a moment the former vice president has long said led him to decide to run against Trump.

"Hate never goes away; it hides," Biden said. "We need to be clear from the President on down in this country: There is no place for hate in America."

Biden's comments came in a speech that largely focused on health care, a message he and other Democrats have highlighted in the 2020 race's closing days -- much as they did in 2018, when Republicans' failed efforts to repeal Obamacare led to a Democratic wave that gave the party control of the House of Representatives.

Biden on Friday accused Trump and Senate Republicans of "court-packing," saying their push to confirm Judge Amy Coney Barrett to the Supreme Court before the election is an effort to undo the Affordable Care Act.

Biden's comments showed how he is trying to flip a question he has ducked in recent days -- whether he would seek to add seats to the Supreme Court to diminish the 6-3 conservative majority that will exist if Barrett is confirmed -- on Republicans by focusing on health policies that a right-leaning court could undo.

"That's what the court-packing going on now is about," Biden said.

"Getting rid of Obamacare is why they are racing to get this nominee through the Supreme Court," he said. "Make no mistake about it, Trump has made it clear from the beginning ... he wants to get rid of Obamacare in its entirety. And with this nominee, he's made that incredibly clear as well."

Biden highlighted popular tenets of the Affordable Care Act, including requiring insurance companies to allow children to remain on their parents' insurance until age 26, requiring insurers to cover those with pre-existing conditions and prohibiting insurers from capping their lifetime payments.

Biden cited Republicans' failed efforts to repeal Obamacare and replace it over the last decade. Trump has promised a less expensive alternative to Obamacare that would keep its mandate for coverage of those with pre-existing conditions, but has not offered any details about how he would do so.

"If I have the honor of becoming your president, we'll build on the Affordable Care Act, no matter what they do," Biden said.

His comments came the day after Biden was pressed in an ABC town hall over whether he supports adding seats to the Supreme Court -- as some progressives have said Democrats should -- in the wake of the GOP's push to confirm Barrett to fill the seat of the late liberal Justice Ruth Bader Ginsburg, four years after Senate Republicans held a Supreme Court seat open for the final 11 months of former President Barack Obama's tenure.

Biden said Thursday night he is "not a fan" of court-packing, but whether he ultimately changes his mind "depends on how this turns out" and "if there's actually real, live debate on the floor" of the Senate about Barrett's confirmation.

If that does not take place and Republicans rush to confirm Barrett before the election, he said, "I'm open to considering what happens from that point on."

Biden committed to taking a clearer position on court-packing before the election, after seeing how the confirmation process plays out.

But he also said he was hesitant to take a specific position at this stage because he wants attention to focus on what confirming Barrett and handing conservatives a 6-3 Supreme Court majority would mean for abortion rights, health care, LGBTQ rights and more.

"If I answer the question directly, then all the focus will be on, what's Biden going to do if he wins, instead of if it is appropriate what is going on now," Biden said. "This is a thing the President loves to do, which is always take our eye off the ball."