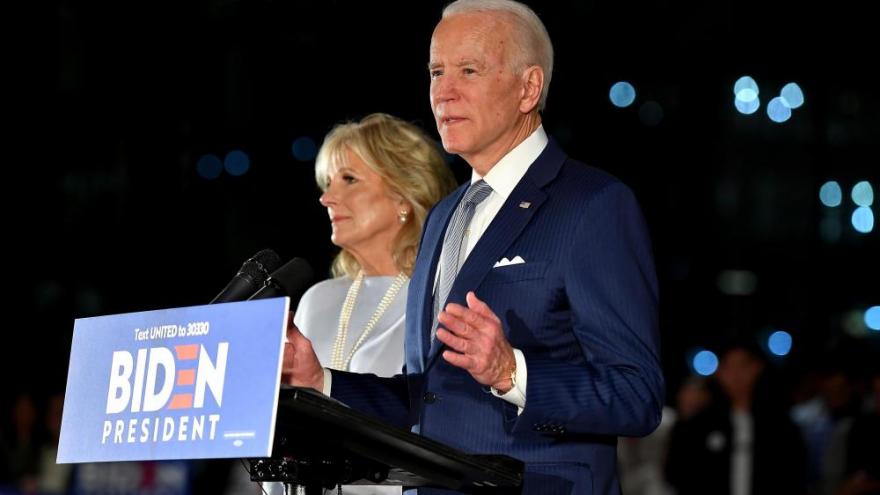 Joe Biden is partially embracing progressives' call for free public college tuition, backing a plan to make universities tuition-free for those whose families make less than $125,000 per year.

(CNN) -- Joe Biden is partially embracing progressives' call for free public college tuition, backing a plan to make universities tuition-free for those whose families make less than $125,000 per year.

The former vice president's move, announced by senior aides on a call with reporters hours before his Sunday night debate with Vermont Sen. Bernie Sanders, is Biden's latest olive branch to the left as he attempts to consolidate the party behind him and pivot to a general election against President Donald Trump.

It comes the same weekend Biden adopted Massachusetts Sen. Elizabeth Warren's proposed bankruptcy reforms, which would undo major parts of a law the two had fought over 15 years ago, when Biden was a Delaware senator and Warren was a professor.

Biden, who has amassed a delegate lead on Sanders and is looking to all but clinch the Democratic nomination in Tuesday's primaries in Arizona, Florida, Illinois and Ohio, is increasingly seeking to embrace popular proposals from his current and former opponents. He had previously called for community college to be tuition-free.

"This continues the tone you have heard from Vice President Biden over the last couple of weeks that as Democrats we are united and we are looking forward to truly pulling this party together," a senior Biden campaign aide said on the Sunday conference call.

"As president, (Biden) will continue to be open to the best ideas to make this a reality, frankly regardless of where they come from," the aide said.

Biden's plan mirrors Sanders' 2017 "College for All Act," which would make public college and university tuition free for those whose families earn less than $125,000 per year. That measure was co-sponsored by Warren and two other former 2020 contenders, California Sen. Kamala Harris and New York Sen. Kirsten Gillibrand.

"Bernie has put forward a plan that would make public colleges and universities free for families whose income is below $125,000," Biden tweeted on Sunday. "It's a good idea, and after consideration, I am proud to add it to my platform."

Biden's plan stops short of what Sanders and Warren had proposed as presidential candidates: Free tuition at public universities for all, regardless of income.

Sanders responded in a statement Sunday evening. "It's great that Joe Biden is now supporting a position that was in the Democratic platform four years ago," the Vermont senator said. "Now we have to go much further. We need to make all public universities, colleges and trade schools tuition-free for everyone like our high schools are. We need to cancel all student debt. And we can fund it with a small tax on Wall Street speculation."

Biden's plan does not address student loan forgiveness. Sanders has called for all student debt to be wiped away, while Warren has called for the elimination of most of it. Biden has said he supports erasing the debt of those who take public service jobs.

Biden's position is now similar to the one taken by Hillary Clinton after her 2016 primary against Sanders. She then said she supported phasing in free tuition over four years so that those whose families make less than $125,000 per year would receive free public university tuition.

This story has been updated to include a response from Sanders.