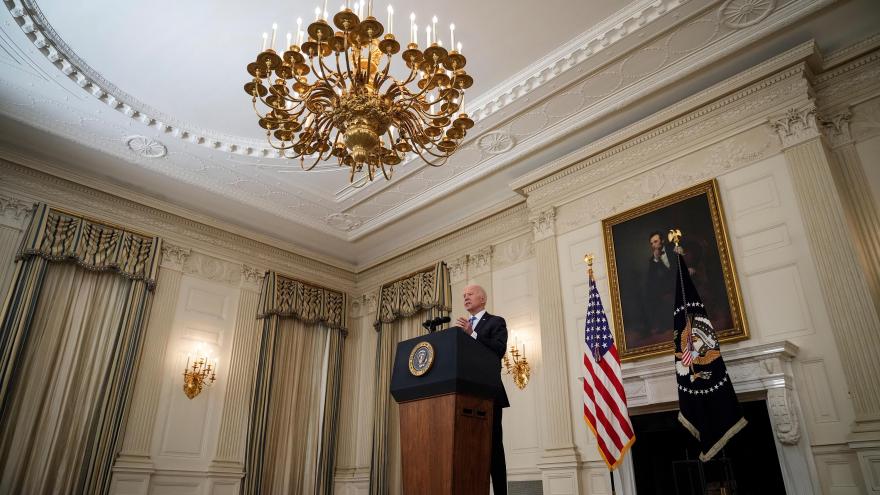 (CNN) -- President Joe Biden continued to put pressure on Facebook on Monday over the online dissemination of Covid-19 vaccine information, but backed off his recent accusation that the company was directly responsible for "killing people" and suggested it was merely allowing misinformation to spread.

When CNN's Kaitlan Collins asked Biden about the comment, Biden said, "I meant precisely what I said. I'm glad you asked me that question."

"Facebook isn't killing people -- these 12 people are out there giving misinformation. Anyone listening to it is getting hurt by it. It's killing people. It's bad information," Biden said, appearing to cite data from the nonprofit Center for Countering Digital Hate (CCDH). A report published by the organization in March indicated that about a dozen people were super-spreaders of anti-vaccine misinformation.

"My hope is that Facebook, instead of taking it personally, that somehow I'm saying Facebook is killing people, that they would do something about the misinformation, the outrageous misinformation about the vaccine. That's what I meant," the President continued, following a speech at the White House about the state of the economy.

And asked whether he would take steps to hold the company accountable if they don't do more, Biden said, "I'm not trying to hold people accountable, I'm trying to make people look at themselves, look in the mirror. Think about that misinformation going to your son, your daughter, your relative, someone you love. That's what I'm asking."

The extraordinary spat between the White House and Facebook over Covid disinformation has pit the President against one of the country's most prominent companies as the race to vaccinate continues and Covid cases spread.

The escalating war of words comes after growing frustration at the White House over what they say are inadequate steps by the social media platform to control the spread of anti-vaccine disinformation.

Responding to Biden's comments about Facebook "killing people" last week, the company seemed to reflect blame back onto the administration.

"President Biden's goal was for 70% of Americans to be vaccinated by July 4. Facebook is not the reason this goal was missed," Guy Rose, Facebook's vice president of integrity, wrote in a post on the company's website on Saturday.

US Surgeon General Dr. Vivek Murthy warned last Thursday health misinformation is "a serious threat to public health," and the administration directly called out social media giant Facebook for not doing enough to stop the spread of false information on its platform.

Earlier Saturday, a Facebook official, speaking anonymously to discuss conversations the company has had with the Biden administration, told CNN, "In private exchanges the Surgeon General has praised our work, including our efforts to inform people about Covid-19. They knew what they were doing. The White House is looking for scapegoats for missing their vaccine goals."

Meetings between the Biden administration and Facebook in recent weeks have been "tense," a source familiar with the conversations told CNN last week.

The source said at the time that Biden officials who had taken concerns about vaccine misinformation to Facebook had concluded that the company was either not "taking this very seriously, or they are hiding something," due to what they view as Facebook's unwillingness to tackle vaccine misinformation.