Biden awards Medal of Honor to 3 soldiers, including the first African American since the Vietnam War 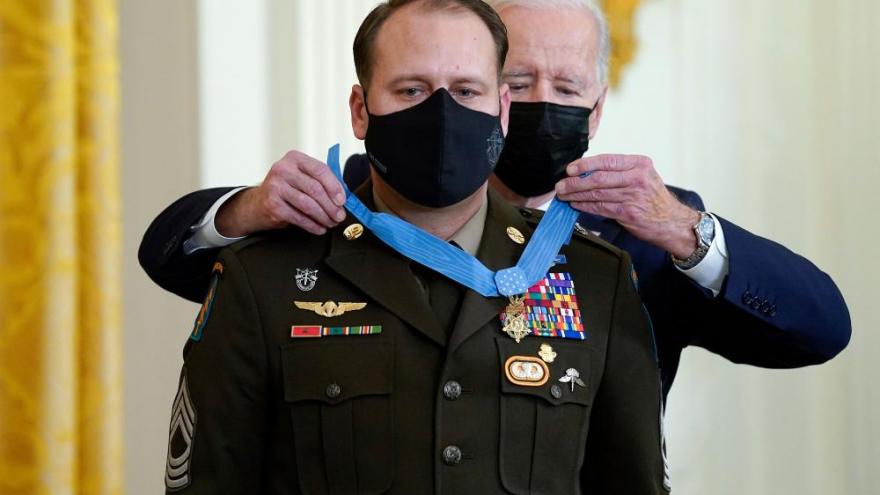 President Joe Biden presents the Medal of Honor to Army Master Sgt. Earl Plumlee for his actions in Afghanistan on Aug. 28, 2013, during an event in the East Room of the White House on Dec. 16.

(CNN) -- President Joe Biden bestowed the Medal of Honor, the most prestigious decoration in the US military, to three Army soldiers on Thursday afternoon.

"Each of you know what it is to stare down danger and summon strength in the face of a moment of trial. We're grateful for all that you three have done," Biden said during the ceremony in the White House East Room.

Cashe, while on fire and exposed to enemy gunfire as he was serving in Iraq, pulled several soldiers and an interpreter from a burning vehicle that was hit by an improvised explosive device. He died as a result of his wounds in 2005. Cashe was awarded a Silver Star for his heroism, but it took a new law, which was signed by then-President Donald Trump, to exempt his case from a deadline for a Medal of Honor.

The President called Cashe "a soldier's soldier" and "a man who literally walked through fire for his men."

Cashe, Biden said, is the seventh service member to receive the Medal of Honor from Operation Iraqi Freedom and the first African American to receive the medal since the Vietnam War.

Celiz was honored for his actions in Afghanistan in 2018. While clearing an area of enemy forces, the unit Celiz led came under enemy fire. He exposed himself to enemy fire more than once, including when he used his body as a shield for an injured person he loaded into a medical evacuation helicopter and guarded it as it took off without him. As he faced gunshots, he waved the aircraft off, telling them to leave without him. Celiz died of his injuries on a later evacuation flight.

"Today, we add his name to the lead vanguard of American warriors who, generation after generation, served our nation," Biden said.

"His legacy lives on, the lives he saved, and the teammates he mentored, and the memories he made with his wife, Katie," he continued, turning to Celiz's daughter, Shannon, and saying, "Thank you for sharing your dad with our country."

Plumlee, the only living Medal of Honor recipient for Thursday's ceremony, was awarded for his actions in Afghanistan in 2013. After insurgents bombed a perimeter wall at Forward Operating Base Ghazni and attempted to move in, Plumlee and other drove toward the explosion. He used his body as a shield for the driver, killed insurgents while armed only with a pistol, carried a solider to safety and administered aid. One firing insurgent he killed was wearing a suicide vest, which detonated when Plumlee fired.

"I'm grateful for your continued service for our country," Biden told Plumlee during Thursday's ceremony.

The President thanked the families of all of the recipients as well, telling them, "It's not just the person who wears the uniform who serves. It's the whole family who serves. The sleepless nights, missed holidays, empty chairs, the celebrations. The way you give back to your community."

Ahead of Thursday's ceremony, Biden sign H.R. 5142 into law, which awards the Congressional Gold Medal to the 13 US service-members who died during the bombing near Kabul airport on August 26th, 2021 -- amid the US military exit from Afghanistan.

In May, Biden awarded the Medal of Honor to Ralph Puckett Jr. -- a United States Army Ranger who led the defense against six Chinese assaults on a frozen hill in the Korean War.